Seize control for a clean Brexit 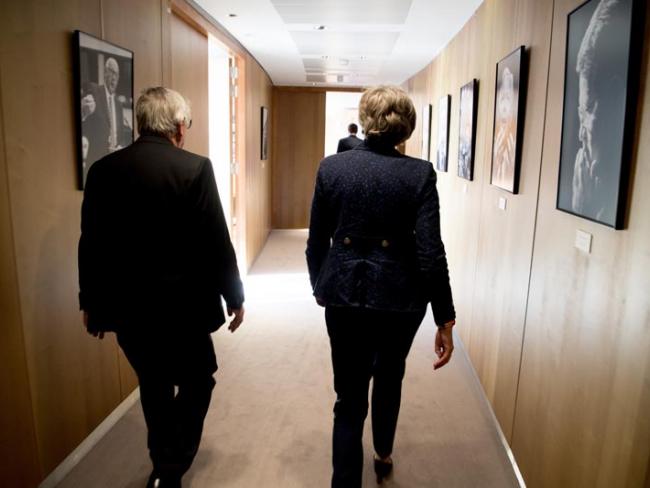 Off once more in search of a crooked deal : Jean-Claude Juncker and Theresa May in Brussels, 7 February 2019. Photo Etienne Ansote/European Union.

Why would 643 people sitting in a Westminster conclave think they can outweigh 17.4 million votes? But those who voted for Brexit do not have the luxury of sitting back and spectating events…

Britain is at a pivotal moment in its history. There has been a seismic change in people’s thinking in favour of our country’s independence though it still has to be completely accomplished. Will we leave the EU, or will we be thwarted?

The referendum result must be implemented. All the attempts to thwart, undermine or overturn it in parliament are illegitimate, for the referendum vote has established the legitimacy of Brexit and of a clean leave.

So whenever the establishment and members of parliament do try to squirm away from delivering the people’s instruction, the momentum set in train by 17.4 million people must be brought into play – to overwhelm the backsliders scrambling around trying to prevent the democratic will.

With so much of importance at stake on both sides, it is only to be expected that the temperature of debate is rising, leading to the emergence of many fine ideas but also to much unpleasantness and caricature. Probably in this charged climate, it’s best to adopt a resolute yet dignified stance: keep calm and insist on independence.

If we are to survive and prosper, if we are going to rebuild our creaking country, what will propel things forward? It seems that only the British people have the capacity to enforce what is wanted. The people have no choice but to advance centre-stage, disperse the set-piece parliamentary wrangling and seize control for a clean Brexit.

Out of the impasse

This is the only way to break out of the engineered impasse, close the chapter on an annoying two-year delay, advance the country and end uncertainty, the only way to reunite the people through the practical gains of Brexit and a growing independence.

The slogan "Take control" is powerful, liberating and encompasses so much potential. To take control, the people will have to behave as Marx suggested when he said in The Communist Manifesto: “The working class has to constitute itself as the nation.” In Britain the working class is the vast majority of the people, whether or not they see it.

For Parliament to plan and execute a coup against democracy it must raise a non-existent parliamentary sovereignty against an actual people’s sovereignty. Why would 630 people sitting in a Westminster conclave think they can outweigh 17.4 million votes? Why would we tolerate it?

Some free market Conservatives want to let the markets take control. Do people want that? One suspects not. Others tend towards letting the United States take control so Britain can be in its thrall. Do people want that either? One suspects not. You don’t kick up a major fuss to throw off control from Brussels only to accept it coming from Washington.

Brexit is an opportunity to stop the existing system from continuing as it has done over the last 46 years, to end the system’s trampling of the people and putting the interests of big business, large banks and the profit motive first. We either live in a truly independent Britain, or become slaves to the operations of international capital.

Nor is Brexit the preserve of a minority in the Conservative Party whose ambitions for Britain seem limited to the ending of tariffs, unilateral declarations of free trade and import of cheap food and goods, which they oddly think will keep working people happy. Brexit is much wider and deeper than that.

Westminster has engineered conditions of constant uncertainty,  so we must prepare for all contingencies.  Whatever is thrown at us we will have to cope with it, whether it’s a relatively clean Brexit and we organise to maximise opportunities, or a denial of Brexit and we organise the outraged backlash to force its reinstatement.

Theresa May has made repeated attempts to cobble together enough MP votes to back an inadequate, subservient, traitorous agreement, a white-flag surrender.  It locks Britain in limbo as an EU vassal state, even without the backstop. It hands over £39 billion with no guarantee we will get anything in return.

The European Court of Justice’s jurisdiction would not definitively end. The control of our country that people voted for in the referendum would be illusory.

‘Who knows the risks the plotters will take as time runs out?’

May’s surrender was voted down by a huge margin in January. Parliament voted it down for a variety of tactical reasons, not all honourable. Then she swirled the gruel on offer a little bit, but when it settled it looked very much like the same stuff, and so far nobody’s been keen. Someone observed that “Her Plan B is Plan A in a false moustache”. We’ve probably reached Plan D by now, still failing to attract followers.

Even if a version of the Withdrawal Agreement is belatedly passed, it would sort nothing, as all the major matters would stay undecided – there would still be no agreement about trade, Britain wouldn’t be able to trade freely around the world, there’d be no limit on ECJ jurisdiction over Britain.

May’s plan is to defer the process a little further and restart Brexit talks under even less advantageous circumstances. Such a manoeuvre would not provide certainty, rather uncertainty would continue throughout the so-called transition and stupidly we would have thrown away £39 billion and still not gained our independence, or even have taken any steps forward.

Worse – it would probably be harder in future for Britain to bring about the promised Brexit. The transition period would necessitate the people battling with the EU for 21 months or more without any guarantee of making any further steps to true independence.

Parliament must continue voting down May’s agreement – a bad deal, even if it undergoes some minute cosmetic surgery. MPs of both major parties must be held to account, bound by the referendum vote and their respective manifestos to support a clean, no-deal exit.

However, the phrase “no deal” could mislead. It might be considered to imply that if we left the EU without reaching an agreement, then no political or trading system would exist. That won’t be the case. No deal would simply mean that Britain would trade under World Trade Organization (WTO) rules, which is standard across most of the world, and not at all quirky.

In fact, 90 per cent of world trade is carried out on WTO terms and 60 per cent of Britain’s trade with other countries is done on WTO terms. It’s not unusual. WTO conventions would give Britain full access to the EU’s single market.  Access does not require membership of the EU and it would be illegal for the EU to restrict it.

So Leave first, then negotiate afterwards, is a cleverer strategy. Plucking up the courage to be an independent nation could mean Britain can negotiate with the EU afterwards from a position of strength not abject weakness, while the EU is still reeling from its diminution and has to appease our desire for independence.

Article 50 being withdrawn is not likely yet, as there isn’t sufficient courage amongst parliament’s plotters to openly deny democracy. But if it were ever to happen, Britain would have to restart the whole process of departure. Even a delay would still leave the key issues unresolved, prolong uncertainty for our economy, break the promise to leave on March 29th and provoke an angry response. It will also lessen the pressure on the EU to make proper concessions if it ever has the mind to do so.

The call for a Second Referendum lacks support among the plotters for it risks the same decision to leave being taken by the people in an even more highly-charged atmosphere. But who knows what risks they will take as time runs out?

Anyway it’s a peculiar state of affairs: parliament can’t decide what to do, so it “must be put back to the people” – but the people have already decided; it’s just that parliament won’t implement the decision.

And if we were kept in the EU, we should remember that the EU is working for ever tighter control over the nations of Europe, ever more dictatorial, ever more centralised, ever more anti-democratic, ever more pro-austerity in the future. The British people hated this before, why would they tolerate it again without rebelling?

A novel situation has developed since the referendum campaign. Growing numbers of working people have a view on how the economy should be organised, how an industry should be run, how public services should function. Then gripped and consumed by the ideas of how to run a country or an industry, they have moved forward into discussion, organisation and struggle to bring about a change.

These pressure points and networks should not subside. They should continue whatever happens in the future. We do not yet have conditions of dual power – the people against the state – but it would appear we have the beginnings of it, and that is awesome.

When we have such a major task to win and secure independence, perhaps it’s going to be difficult to sort these problems of democratic structure simultaneously, particularly as it’s never been solved satisfactorily anywhere yet throughout history. The problem most probably resides in the idea of representation in assemblies and the development of a separate caste of politicians and it is not yet obvious how to move beyond this method to a better method of governance.

Making parliament bend to the will of people and leave the EU will be a good enough start.

• Related article: Pile on the pressure!

• This article is an edited and shortened version of a speech given at a CPBML public meeting in London on 12 February.