Skip to main content
Home » News/Views » So why are we relying on EU healthcare staff?

So why are we relying on EU healthcare staff? 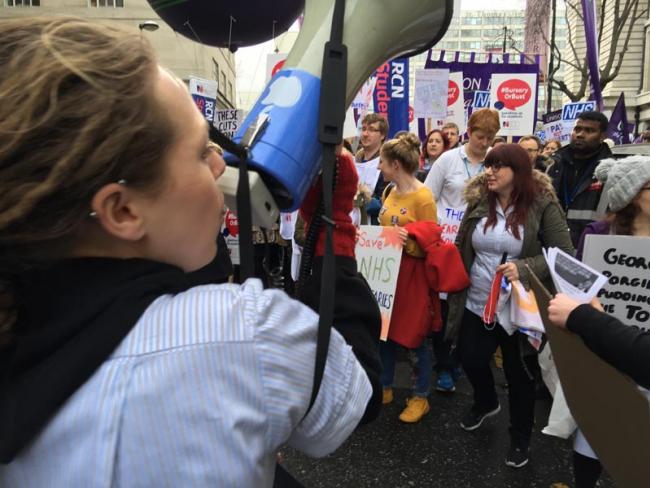 Marching over bursaries, January 2016. First they cut the degree places, then they imported EU nurses and therapists – then they stopped the bursaries. Photo Workers.

How many times have you heard it said that “Britain relies on health care staff from the EU”? But no one seems to ask “Why?” You can see why the government won’t ask the question. The bigger puzzle is why workers are ignoring what is in front of their eyes.

In London in particular workers find it hard to afford housing, and staff often live a two-hour journey from their workplace. When this taken with the typical NHS 12-our shift, it makes for a 16- hour working day. Combining working in health care with family life becomes a major challenge.

Is there a shortage of applicants for NHS professional programmes to become doctors, nurses, physiotherapists, etc? No, there are typically more applicants than places available. In medicine applicants with three A grades at A level may not be successful in finding a place. So what on earth is going on?

Since the inception of the NHS workforce planning has been a problem and never under real professional control. The numbers in training has typically been a political issue. This is best illustrated by two recent decisions, one from the previous government under David Cameron and Nick Clegg, and the other a George Osborne Budget decision of November 2015.

The first is having an impact now. The other decision will coincide with our departure from the EU. Unless tackled it will provoke a crisis which will not be a result of leaving the EU but a result of our own home -made poor planning .

The Coalition government took a decision to reduce the number of nurse and allied health professional training places  across the country in the two years to 2012. In practice, this meant a reduction of 20 per cent of nurse training places in London, for example. Likewise the Scottish Government – despite frequent assertions from the Scottish Nationalist Party of how much more they cared about the NHS – took very similar measures.

There was some limited opposition at the time from NHS unions, and the University College Union (UCU) annual conference passed a resolution condemning the “reduction in the number of places on Nursing, Midwifery and Allied Health professional degree programmes at a time of rising health need”.

The UCU was particularly concerned because the cut led to widespread redundancy of health care lecturers. No one even knows exactly how many experienced healthcare lecturers were “lost” during this two-year period as no one – neither the NHS, nor the universities, nor trade unions counted the redundancies.

This is the period when the NHS really began to rely on EU nurses and therapists to plug the gap. A most unsatisfactory solution, because often these EU staff had a high turnover – they left when they realised how expensive housing was in places like London. Others live in very overcrowded conditions and some even “flip flop” which entails working opposite 12 hour shifts and using the same bed.

The 2010 cut in training places was a cynical political move to “make savings” by allowing other European countries to pay to train staff and then entice them to Britain.

This move was facilitated by the EU Mutual Recognition of Professional Qualifications Directive (MRPQ) – see box below. Many NHS trusts conducted big recruitment drives in Spain and Portugal. Although these recruitment drives were expensive and unethical, they did work out cheaper for the Treasury in the short term.

‘Self-evidently the number of training places needs to be increased.’

The other workforce decision which is currently “working its way through the system” is the abolition of bursaries and imposition of full tuition fees for nursing and allied health professional courses. From this  coming September all students of these health care professions will be paying full student loans and finish with an average debt of over £50,000.

This decision was not made by the Department of Health. It was made by the Treasury as part of George Osborne’s November 2015 budget. The same George Osborne now earns £650,000 for working four days a month for US firm Blackrock investments which – surprise, surprise – has taken over part of the student loan book.

The impact of decision to abolish bursaries and impose full tuition fees has been immediate. This February the university admissions service, UCAS, reported a 23 per cent fall in applications to nursing and midwifery courses at English universities.

If not addressed this fall will coincide with the anticipated peak in numbers for the NHS workforce predicted for 2020.

What needs to be done?

The good thing about understanding that our “dependence” on EU staff is politically induced is that it points the way to rectifying the situation.

Firstly we need to retain the staff we currently have! The question of pay is central (see article on NHS pay).

Secondly we need an emergency measure to address the dips in application to nursing and allied health care courses. Many applicants for September 2017 have been recruited on the basis of paying the student loan, and changes to this process midyear will be difficult.

But all NHS employers need to consider a recruitment and retention strategy which could include paying off the loan of those students who commit to working in the NHS after they qualify in 2020.

An announcement of this nature even at this stage of the recruitment cycle could see a rush of applications. It only needs one NHS trust to make the offer and the process could be under way. In the longer term the decision to make health care staff pay for their education on a loans basis must be reversed to make NHS careers attractive. After our decision to leave the EU it is a changed situation and all policy, including NHS workforce policy, can be revisited.

Thirdly and self-evidently the number of training places needs to be increased. This would prove to be far less expensive than some politicians might imagine if we addressed the question of pay and retention of staff. One experienced NHS practitioner can be as productive as two newly qualified staff, and newly qualified staff are far more likely to remain in the professions if they feel supported by an experienced team.

At the moment we have a very curious picture in relation to training places. One early decision of Theresa May’s government was to expand UK medical school places from September 2018. The government plans to fund up to 1,500 additional student places through medical school each year.

But if this expansion goes hand in hand with a slump in nursing and allied health profession applications we would see a rise in one profession coinciding with a decline in others!

So to answer the question of “why the reliance on EU Staff?, the problem is home-made – and fortunately there is are home-made solutions in the three steps outlined above.

• Related article: With the single market, why train at all?