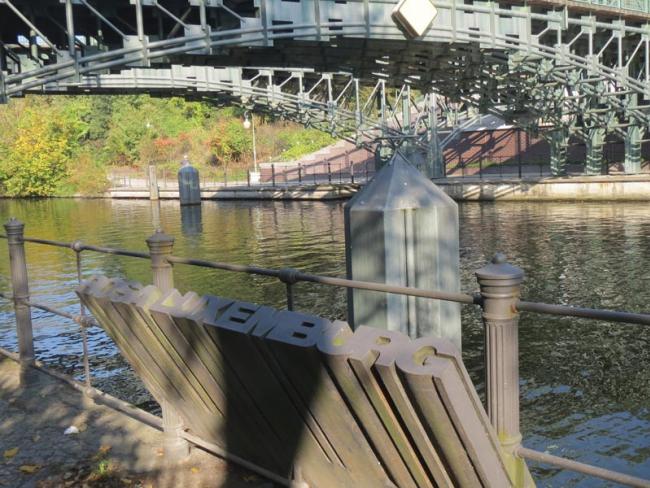 The memorial to Rosa Luxemburg on the Landwehr Canal, Berlin, at the site where her murdered body was thrown in the water by counter-revolutionaries on 15 January 1919. Not far away is a companion memorial to Karl Liebknecht, murdered on the same day.

Apart from the odd rhetorical flourish, the Second International never aspired to be a revolutionary organisation, unlike the First. It left no worthwhile legacy…

In the late 1880s, calls were made to re-create an international organisation of workers. The first, known as the First International but properly called the International Workingmen’s Association, had collapsed in 1876 (see Workers, February 2011).

The calls for a new body came largely from American and French workers, and from trade unionists as much as from socialists. But the new organisation, known as the Second International, proved a disappointment. Without Marx’s clarity and in the absence of any truly revolutionary party and ideology, it was a concentration of weakness rather than of strength.

Indeed, the Second International’s best efforts were its first. The founding 1889 Congress initiated the idea of 1 May as International Workers’ Day and promoted a campaign for an eight-hour working day, at the prompting of American trade unionists.

May Day 1890, too, was an impressive event. Great demonstrations for the eight-hour day were held in many countries and there were extensive stoppages of work in France, Austria, Hungary, Italy, Spain, Belgium, Holland, Scandinavia and the United States. But the only immediate success was in the United States, where considerable numbers of workers, especially carpenters, won the eight-hour day.

But then things went downhill, rapidly.

‘The Second International came to be dominated by reformers and collaborators with capitalism.’

Following the collapse of the First International and after the death of Marx in 1883, Marxism was re-shaped and called social democracy. From the 1880s until the First World War, social democrats held many contradictory positions, ranging from reformist to revolutionary.

Though some social democrats remained true to the goal of revolution, it was during this period that social democracy inside the Second International came to be dominated by reformers and collaborators with capitalism.

Generally wary of trade unions and of direct action, the Second International quickly evolved into a federation of “socialist” parties that viewed political action as working in the electoral field and building up parliamentary strength by constitutional means. Wherever the electoral franchise was still non-existent or too narrow, they agitated for adult or manhood suffrage, following the approach of the German Social Democrats, Europe’s biggest socialist party.

Grandiose yet utopian plans for social improvement were argued over repeatedly at congresses, achieving nothing. During these years many assumed socialism was inevitable, achievable in a bourgeois democratic way.

Some, like the German social democrat Karl Kautsky, who later denounced the Russian Revolution, even felt all they had to do was just sit tight and accumulate support on their “Way to Power”. English Fabians and Germans who “revised” Marxism both felt there was no precise point at which capitalism ended and socialism began, which would have made the victory of socialism difficult to detect.

In the early years this “socialist” electoral influence was weak, but after 1900 it gained electoral strength in some countries. The German Social Democrats built up a gigantic party machine allegedly for class war, then shrank from using it for this or really any other purpose.

In the end its party leaders regarded themselves as the supreme cause. In 1891 the German SDP adopted the Erfurt Programme, which made clear it would pursue its goals through legal political participation rather than by revolutionary activity.

In 1900 the Second International had declared it would fight against the colonial expansionism of the capitalist powers, but soon German, Belgian, Dutch and other “socialists” emerged as forthright defenders of their own respective colonies.

The problem of imperialist war was debated again and again. The Second International resolved that workers could prevent war if they wished to. But when it came to the crunch almost all its members backed their own imperialist governments.

At the Stuttgart Congress in 1907 Lenin from Russia and Rosa Luxemburg, in origin Polish, successfully moved amendments stating that militarism was the chief weapon of class oppression and stressing that social democrats should try to prevent war from breaking out or stop it once begun, and use the crisis created by the war to hasten the overthrow of the bourgeoisie. In the event, only the Russian Bolsheviks carried this out.

The inability of the Second International to override workers’ loyalties to their belligerent motherlands was brutally exposed by the outbreak of World War in 1914. Overwhelmed by the frenzy and bigotry of hostilities, the social democratic parties tamely followed their respective countries’ belligerent positions rather than maintain the united front against war. Broken by the war, the Second International disbanded in 1916 as a complete irrelevance.

Full of futile debates, empty phrases, barren and impotent leaders, the Second International produced virtually no useful thought. Everyone was squabbling over phrases, while throwing their real energy into winning elections. Only Lenin, Rosa Luxemburg and Karl Liebknecht (who with Rosa Luxembourg was later to found the Communist Party of Germany) stand out from the general throng of dead-hands, mediocrity and lack of ambition in the Second International.

So with the gathering menace and drum-beat of war, Rosa Luxemburg’s books – such as Peace Utopias (1907) and The Junius Pamphlet (1915) – are still very much worth a read. And the world can still learn from the shining example of The October Revolution, which took the Soviet Union out of the slaughter of World War One to start socialist construction.