Solid strike action on the railways over driver-only operation 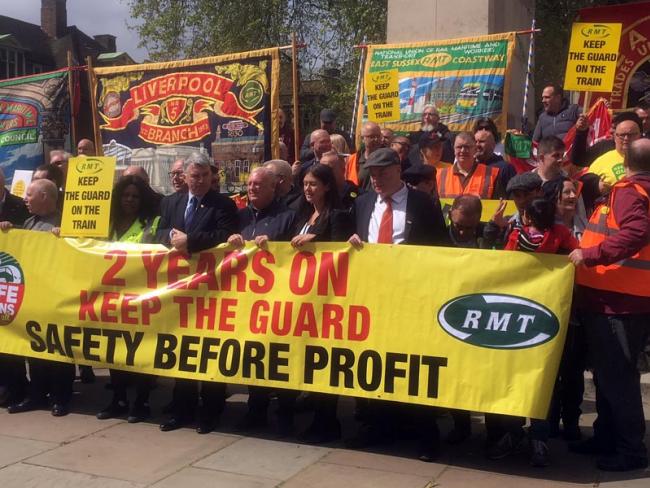 RMT rally outside the Houses of Parliament, April 2018. Photo Workers.

RMT continues its dogged campaign to defend passenger safety and the jobs of its guard members on trains. While RMT negotiators inch towards a final settlement of the long running dispute in Merseyrail, the dispute in South Western Railway has escalated dramatically – and a new front has opened up in West Midlands Trains, a subsidiary of Dutch state railway company NS.

For the first time, Saturday 16 November saw solid strike action across the Midlands in response to recent attempts by West Midlands Trains to dispense with its guards. As a result, the company was only able to run a very limited service. The disruption also seriously affected local services serving Liverpool, Northampton, Milton Keynes, and London Euston, and guards will be on strike every Saturday until Christmas.

RMT has responded firmly to duplicitous negotiating tactics by First Group’s South Western Railway by calling no less than 27 days of strike action in December. Strikes starting on 2 December will mean very few trains running on lines to and from London Waterloo in the run up to Christmas.

The union has urged the government to stop promoting Driver Only Operation of trains, which lies at the heart of the disputes over guards. The call came after the publication of a secret report commissioned by the Department for Ttransport and the Rail Delivery Group confirmed that it means less assistance for disabled people on the railways.

RMT general secretary Mick Cash said: “The conclusions of this compromised, industry-sponsored report are pathetic but ironically the evidence within it is clear – Driver Only Operation is a massive problem for disabled people and they don’t want it.

“The government and the Train Operating Companies need to stop looking for new ways to make money by cutting staff jobs and begin investing in creating a truly accessible railway.”