On the streets in Manchester 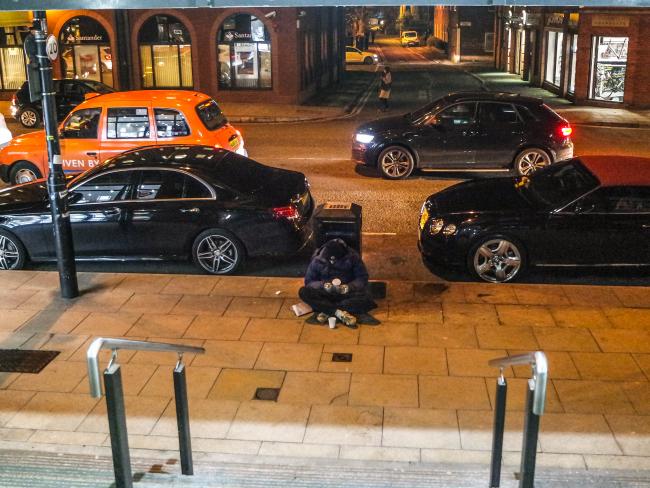 Homelessness is growing in Britain, by 4 per cent last year according to housing charity Shelter. That is in part due to the shortage of housing, public housing in particular. This is greatest in London, but is growing fast elsewhere in England – the Midlands, Yorkshire, and the North-West.

Seeing someone homeless and begging on the streets is just the most obvious symptom of a housing crisis. It’s too easy for politicians to blame drug use and point out the mental and physical health problems that can lead to someone ending up on the streets.

The onslaught on public sector housing has continued over many years. The effects of the pernicious Thatcherite “right to buy” are still with us. Successive governments have taken decisions making things worse, recently with the “buy to let” market. Equally iniquitous are the increasingly frequent examples of property gobbled up by foreign investors purely as a profitable investment, no doubt often tax-free too.

"Just nine of 77 apartments are owned by the people who live in them."

This isn’t an exclusively London phenomenon. The BBC One programme Inside Out North West reported on 4 March about the increase in foreign investors buying up properties in Manchester city centre. In one new apartment block, One Smithfield Square, just nine of 77 apartments are owned by the people who live in them. Most are owned by foreign buyers, or companies registered in the British Virgin Islands, and 20 are owned by British property companies or buy-to-let landlords.

Manchester City Council leader Councillor Sir Richard Leese said he welcomed investment in the city, but acknowledged that “there isn't enough being built for sale to owner-occupiers and there absolutely isn't enough that's being built for low-income individuals and low-income families.” This illustrates the causal relationship between transnational corporations and homelessness.

Local authorities, Manchester included, are not innocent in this. They have overseen bending and managing of the rules on “affordable” housing. Last year the Guardian reported that in the previous two years none of the over 14,000 homes in large developments approved by Manchester City Council’s planning committee were “affordable”, breaking its own guidelines for 20 per cent of new homes to be affordable.

The council’s defence was that there the proportion of social rented properties in the city was about twice the national average. Yet although there are around 68,000 social rented homes in Manchester, a third of the housing stock, nearly 13,000 people were waiting for a house on the social housing register.

Developers can avoid the guidelines in other ways. Some will start a scheme that incudes affordable or social housing. But once under way, the developer produces an assessment claiming that the scheme would not be profitable enough if it were forced to include any affordable flats. This is an old trick, but it seems to catch councils out time and again.

Affordability according to the criteria looks like a sick joke to many workers. Manchester council’s definition is that rent or mortgage payments should be less than one-third of household income. It claims that flats may meet that test once on the open market. In reality a household will need more than one income and market rents are far above the housing benefit cap. And rents are rising too in Manchester, unlike wages.

In December 2018 Manchester City Council announced an “update” to its policy on affordable housing. It aims for 6,400 such homes by 2026 including 3,000 built directly by the council. The plans for achieving this include making smaller sites available to developers, working with partners expected to “lead by example” by including 20 per cent of affordable or social housing in their schemes. Crucially the council admits that not all sites will meet that level. It hopes there will be schemes with more, to balance those with less. The council is not exactly putting developers on the rack with its latest initiative.