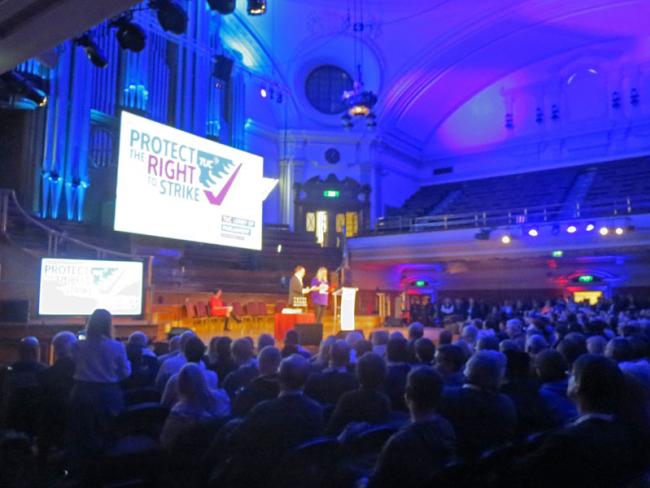 TUC rally against the Trade Union Act, November 2015. Did the TUC do a deal to back Remain if clauses in the Act were withdrawn? Photo Workers

The referendum result continues to highlight the ever-widening chasm between membership and structure within the unions. It also underscores the urgent need for unions to take responsibility for an independent Britain…

The magnificent clarity shown by the vote to leave the EU must now be carried through into the trade unions. Most workers voted Leave. The world has changed, and unions must look to the future. The focus needs to be on discussions about what an independent Britain should look like for British workers, and how we organise to achieve this.

But we must also face up to the mess created by the past. The lack of clarity shown in most unions before the Referendum manifested itself in their appalling behaviour during the campaign. Some were viciously active for Remain, some pretended neutrality and indifference, and yet others manipulated member opinion to arrive at a Remain position. Only a few, like the RMT, stuck to principle.

The members, meanwhile, seemed to have taken their own advice and ignored their union leaderships when voting. Yet after the vote, those who continue to deny the referendum result are still trying to create confusion among the working class through its trade unions.

And just when was that deal struck for the unions to campaign for a Remain vote? The rumour, never repudiated, is that it was the day after the government climbed down over facility time and deduction of subscriptions at source in the progress of the Trade Union Bill in Parliament – enough to buy off a number of large unions still clinging to their check-off systems. In Unison’s case more publicity was issued to support the Remain campaign than in the entire campaign against the Trade Union Act.

The continuing decline in membership, despite every trade union being a self-proclaimed “organising union”, again strikes at the heart of relevance and the ability to work in the interests of workers. Over a long period unions have absorbed and reinforced a fatalism emanating from workers themselves and their lack of belief and confidence in their own strength, history and abilities to deal with the employers. But millions of workers overcame that fatalism during the Brexit campaign, despite their unions’ role, by voting to take back control.

In the trade unions, the willingness to seize upon glib campaign slogans without analysis or understanding shows further the weakness and lack of class thinking. For example, to campaign for the “living wage” establishes wages at a new national minimum wage, slightly above the state national minimum wage. Such campaigns, hailed as progress by most trade unions, undercut established better rates for the job won through struggle, substituting institutionalised benefits and low wages, and reinforcing fatalism in the workplace.

In the name of do-gooding we have created a nightmare for ourselves. For example Unite’s campaign in London hospitals for the “London living wage” undercut the established Agenda for Change banding. The employers beamed at the opportunity presented to cut wages but retreated in the face of clearer trade unionist opposition.

Unison issued more publicity to support Remain than in the entire campaign against the Trade Union Act.’

But the marker had been put down: sloganising and quick fix solutions. These are often really about trying to stop the loss of members by poaching from other trade unions in similar declining membership, and resolve nothing.

The downward spiral continues: 58 trade unions representing approximately 5.8 million workers reflects the Trades Union Congress in decline and irrelevance. This at a time of the greatest number of workers ever employed in Britain – over 32 million. Why then the failure to grow?

Between 4 and 10 per cent of members voted in recent national leadership elections held by Britain’s three largest trade unions – Unison, Unite and GMB. In other words no executive council or general secretary has a mandate for anything. All trade unions have swathes of vacancies in their democratic structures.

Attempts to halt decline which were a knee jerk reaction to Thatcher’s attack in the 1980s have not succeeded, only making trade unions appear more impotent, divorced from their membership base. For example, creating swathes of lay trade union branch officer positions, supposedly to attract participation by promoting any fad of the day, have largely created division and vested interest that combine to paralyse the ability to function.

One size doesn’t fit all

The creation of one-size-fits-all mega-unions has divorced them from their memberships and from the concerns that bring people together – the workplace, skill, industry, identity. Obviously there are unions that are the exception to this trend, such as the RMT in the privatised rail companies. But the larger general unions, Unison, GMB and Unite, are usually competing between themselves for the same membership.

They have largely failed to recognise the new reality of a growing privatised outsourced public sector. There is an inability to translate decades of well organised workplaces with usually one employer into the mess of scattered workplaces with multiple employers.

More workers than ever are in work but have weaker or no workplace organisation. This is the result of the loss of the nationalised industries with their trade union organisation, the extermination of large scale manufacturing industry and trade union density relevant to the work itself, and the continuing wave of outsourcing everything. Now, many employers will treat with, but not recognise, trade unions, knowing they are antiquated, rusty, staffed by ghosts or only surviving because legislation demands it.

A return to principle is required for us to address collectively the issues that unite workers: pay, terms and conditions, the issues of the workplace, health and safety, the identity of the skill, job, trade and so on. We challenge exploitation, the profit motive and the failure of market economics in the 21st century. We put forward instead a strategic overview of what work an independent Britain needs, what industrial strategies we require and where we are going. Trade unions should drive forward a “manifesto for work” to reclaim our natural territory in the place of work, and recruit and organise on that basis.

There is the need to challenge the models of trade unionism, the wrong models, the imported models, to arrive at purpose and fitness for purpose. Vested interests and competition, membership wars resolved by raiding the trade union next to you, merger and empire building have to cease.

The adoption of business unionism is one model almost tailor-made for the recent Trade Union Act. The union becomes an insurance policy with innumerable talking shops and conferences to distract from the inability to operate on the shop floor.

The resurrection of the corporatism model of the 1970s and 80s working hand in glove with the state likewise must be resisted as it fetters the uniqueness and independence of our unions. The acceptance of anti-trade union legislation, resisted so fiercely in the 1970s but so meekly embraced in the 21st century, is an aspect of this corporatism.

And of course there is the political model of trade unionism, adopted after abandoning the workplace. It attempts either to create the Labour Party in an image that it never was, or another “workers party” to thrive in the corruption of Parliament in the same way as the Labour Party has always done. Few trade unions affiliated to the Labour Party dare publish the real figures of actual active members in the Labour Party. The recent Labour Party leadership contest, like Benn and Foot previously, is just a diversion.

After the referendum the field of operation is utterly changed. How do 32 million workers in work organise and fight with self reliance for their interests? If workers do this, there will not be a parliamentarian Labour Party or capitalism in the 21st century.

Recreation of purpose would contribute to greater engagement. Those in the trade unions who desperately sought sanctuary in the EU must now face reality and look to what is needed in the future. In their creation, our trade unions were a model emulated across the world. Now they have to be the engines for class rejuvenation as all power emanates from the shop floor and workplace in Britain.