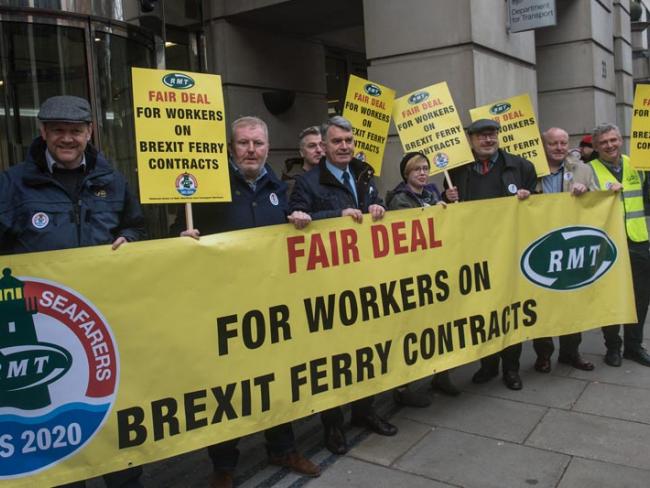 11 January 2019: Members of the Rail Maritime and Transport union demonstrate outside the Department for Transport in Westminster. Photo courtesy RMT.

The RMT union called yesterday for the government to publish the legal advice it received over the granting of Brexit ferry contracts to Seaborne Freight and others.

For weeks now maritime unions have been protesting about the contracts. The RMT has taken protests to the Department for Transport (pictured), Ramsgate and Portsmouth demanding “basic assurances on UK ratings jobs, union recognition and full compliance with UK employment laws”.

Nautilus International, which represents merchant navy officers, warned at the start of January that the way the government is spending a reported £100 million to charter ferries to prepare for Brexit “could create a costly and damaging own goal for the British shipping industry”.

Seaborne Freight is a “start-up” operation, meaning it has no experience as a company of running freight shipping. And another company involved in the contracts, French-owned Britanny Ferries, employs very few British sailors. A third company, DFDS, is Danish-owned.

The RMT is demanding that all the ferries be staffed with UK ratings, that the companies recognise UK trade unions, and that they be fully compliant with UK employment law.

“We will not allow the scandal of the Ships of Shame in British waters, where poverty pay below the minimum wage and shocking working conditions are endemic, to roll over to these contracts,” said RMT general secretary Mick Cash.

“'Brexit was meant to be all about opportunities for the UK, but that does not seem to extend to the British shipping industry or British seafarers,” said Nautilus general secretary Mark Dickinson.

Seaborne Freight was awarded a £13.8 million contract at the end of December to run a service between Ramsgate and Ostend despite having no ships, leave alone any contracts with the ports.

Confidence in the company was not boosted when at the start of January its website displayed terms and conditions copied and pasted from a pizza delivery company.

Welsh seafarers call for jobs, training and a future
No flag of ours
Apart from the flag, what's British about the Stena Impero?
Brexit jobs petition launched
Fleet Auxiliarly action over pay