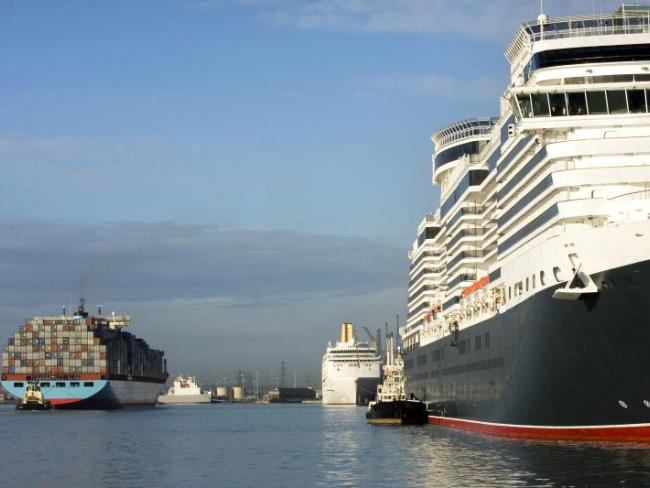 Trade unions involved in British shipping have set their minds to exploiting the opportunities that will open up when we leave the EU. In so doing, they are setting an example to the whole trade union movement…

As an island, Britain depends absolutely on shipping. It is reckoned that 95 per cent of all external trade comes in and leaves by sea. That’s 496 million tonnes of maritime freight handled from ships at British ports, and more than 22 million passengers moved on short sea, continental and international cruise ferries.

For all that, the industry is in decline, short of skilled staff, and increasingly turning to other countries to supply labour. The scale of that decline is staggering. Sixty years ago Britain was responsible for 18 per cent of world shipping. Now it is 0.8 per cent – the word “decimation” doesn’t even come close.

During the referendum campaign most of the organisations representing British shipping were in favour of staying in the European Union – with the exception of the RMT union, which represents ratings. The employers, through the UK Chamber of Shipping, said that membership of the single market had brought benefits that shouldn’t be lost.

What benefits? Four decades ago, shortly after the referendum that confirmed Britain’s membership of the European Economic Community, there were 90,000 British seafarers. Now the figure is below 23,000. It is set to go lower still. Over a third of UK officers are due to retire in the next ten years, says officers’ union Nautilus International.

‘The annual Day of the Seafarer could become a memorial event in the UK.’

With ratings the situation is even more dire. In the early 1980s there were 30,000 British ratings working at sea in the UK merchant navy. By 2015 it was down to 8,830 – and the RMT says that “the majority” of these are due to retire by 2020. Half of the ratings are older than 40, a figure that rises to 74 per cent among deck ratings and 76 per cent among engine ratings.

Note that there are actually 87,000 ratings jobs in the UK shipping industry. But as the RMT notes, only 10 per cent of them are held by people living in Britain.

It’s a situation mirrored, albeit not quite as badly, across Europe. European shipowners use what the RMT calls “social dumping” – importing workers from low-wage countries and flags of convenience to raise profits. Only 40 per cent of the 516,000 seafarers in the European shipping industry actually live there.

That’s where the politics of “free” trade and the “free market” lead: freedom for the employers, virtual slavery for workers.

A protest in Liverpool highlighted the fact that not one British seafarer will be employed on Atlantic Container Line’s new fleet of five ro-ro container vessels – even though the ships are registered in the port.

If things go on like this, said RMT general secretary Mick Cash on the International Maritime Organisation’s annual Day of the Seafarer in June this year, the day “will become a memorial event in the UK”.

Perversely, none of this stopped the council of Nautilus International, when it met in April 2016 two months before the referendum on leaving, from agreeing that “the best interests of the maritime profession and the shipping industry would be secured by the UK remaining in the EU”.

Since the referendum, though, the industry has been at the forefront of those in Britain planning to make the most of the opportunities of Brexit. Like many in Britain who voted Remain, they were never enthusiastic about the European Union, well aware of many disadvantages of staying, and using phrases such as “on balance” to justify their timidity.

Nautilus responded to the vote immediately: “The British people have spoken. And they've said very clearly that they wish the UK to exit the European Union.” Then, in October 2016, it published its “Charter for Jobs”, calling on the government and the shipping industry to secure the future of Britain’s maritime sector.

The RMT, which had campaigned for Leave, also produced a strategy for jobs for British seafarers, focused around a campaign called Save Our Seafarers 2020, or SOS 2020 for short.

Launched at Nautilus’s UK branch conference in Cardiff, the Charter for Jobs revolves around ten key points (see Box, right) – “an SOS to deliver on promises made during the European Union referendum debate in 2016, and prioritise jobs, skills and a decent future for UK maritime professionals”.

Training is central to a future for British shipping. Nautilus wants the government to foot the full cost of training British seafarers – at present it is covering only 36 per cent of the cost of training, which makes Britain the second most expensive country in which to train.

The fact is that plenty of young people would like to train for a career at sea. Many companies report three to four times as many applications to train as there are places available.

Part of Nautilus’s demand is for revised “tonnage tax” commitments. Tonnage tax was introduced by the Labour government to increase profits of shipping companies by allowing them to avoid corporation tax. Instead, they are taxed more favourably on the basis of an assessment of notional profits based on the tonnage of ships.

If that sounds like a dodge, well, it is. Companies that opt for tonnage tax are supposed to sign up to a number of commitments, including one to train new staff. But as Nautilus points out, the number of officers being trained is insufficient even to replace those who are leaving.

Even worse, says Nautilus, some tonnage tax companies have no intention of employing British officers once their cadets have obtained their certificates of competency (CECs). The reason is simple: CECs are easy for non-UK seafarers to obtain, and these staff are cheaper to employ.

The current system, says Nautilus, creates a pool of non-UK seafarers competing for jobs against unemployed UK seafarers. Central to this issue is the matter of language – as in other safety-critical professions, such as medicine.

‘Plenty of young people would like to train for a career at sea.’

That’s why the union wants all officers on UK shipping to meet the requirements of a single examination that would give the assurance that applicants have standards of proficiency in the English language, comprehensive knowledge of maritime expertise and of UK law in appropriate areas. And it wants the tests to be administered orally by a qualified marine surveyor – someone who can really judge what people understand and how they communicate.

This kind of test is often deemed inconsistent with the EU’s principles of free movement, which bans systematic language testing of job applicants and allows testing only on an individual basis and only in “exceptional circumstances”. But Brexit provides the opportunity to introduce it, and with it the principle of “host country conditions” – applicants from abroad should know as much about British shipping as applicants from within Britain.

Much attention is now being focused on “cabotage”, sometimes called coastal trade, and here Nautilus and the RMT are putting forward radical proposals. At least, they are radical in the European Union – in the US they have been part of the law since 1920.

Talking about the need to boost the employment of UK-resident seafarers, Nautilus notes, “After leaving the EU, the UK will not be bound by EU policy and should therefore develop an equivalent of the United States Jones Act in UK waters.” The RMT also backs a UK version of the Jones Act, formally known as the US Merchant Marine Act of 1920.

The Jones Act is the kind of law that the British establishment could learn from. That includes its preamble:

“It is necessary for the national defense and for the proper growth of its foreign and domestic commerce that the United States shall have a merchant marine of the best equipped and most suitable types of vessels sufficient to carry the greater portion of its commerce and serve as a naval or military auxiliary in time of war or national emergency, ultimately to be owned and operated privately by citizens of the United States.”

Just imagine that being applied to Britain. It couldn’t happen under the EU – but it can when we leave. The act says that all goods carried by water between US ports must be carried in US-flagged and built ships, crewed by US citizens and permanent residents, and owned by US citizens.

It’s a measure of how reactionary policy is in Britain that such legislation would be viewed as close to revolution. But if enacted here, it would transform employment, shipping, wage rates and shipbuilding as well.

RMT calls for action to ensure jobs for British ratings
Take control of P&O to safeguard jobs and marine supply chain, says union
Unions call for ‘Jones Act’ to save jobs and industry
Welsh seafarers call for jobs, training and a future
No flag of ours