Skip to main content
Home » News/Views » US, NATO stoke the flames of open war over Ukraine

US, NATO stoke the flames of open war over Ukraine 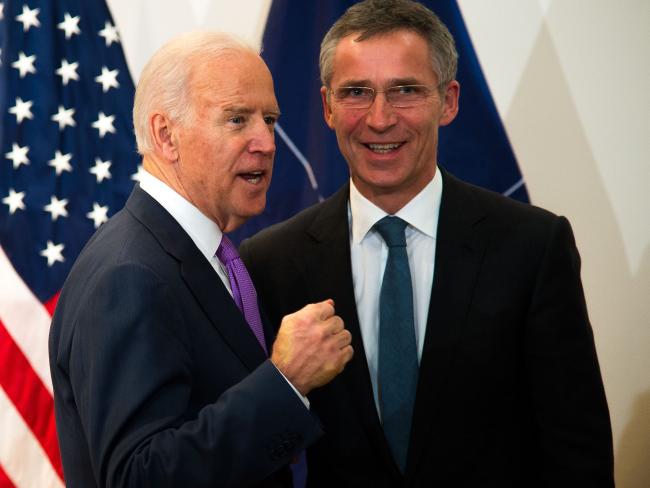 The drums of war are beating again as the US attempts to maintain its aggressive attitude to Russia. While peace talks brokered by France, Germany and Russia are taking place, the US and NATO are moving to a war footing, endangering the peace of the world.

Ever obedient to the wishes of the US, Britain is to help ratchet up the tension by sending 1,000 troops and four RAF Typhoon jets as its contribution to NATO “Force Integration Units” to be established in Estonia, Latvia, Lithuania, Poland, Romania and Bulgaria – all of which share a border with Russia.

There are also plans to deploy such a unit in Hungary at a later time. A new Rapid Response Force to be set up in eastern Europe as a permanent presence is to field a brigade of some 5,000 soldiers, and will be coordinated by Britain. It will include soldiers from the German army, whose last incursion into the area 74 years ago ended badly.

An alliance for war

NATO is showing itself to be an alliance for war. On 2 February, addressing the Leangkollen Conference – an annual two-day closed meeting of Western military experts – NATO deputy general secretary Alexander Vershbow said, “NATO is doing its part. To help Ukraine to modernize and reform its armed forces, we have launched five trust funds to assist in areas like command and control, logistics, cyber defense and military medicine.”

Vershbow, an American ambassador appointed to his NATO post by Barack Obama, continued: “We are sending more advisors to Kiev and will be carrying out exercises with Ukraine’s armed forces. And we are helping Moldova and Georgia to strengthen their defense capacity in similar ways, and, in Georgia’s case, to help it prepare for future membership in the Alliance.”

To see how deep US hostility to Russia is running, take a look at Resolution 758, passed by the US Congress on 4 December with just 10 votes against. The resolution did everything except openly declare war against Russia.

‘The accusation was made with no proof  no video, no pictures.’

It stated that “military intervention” by the Russian Federation in Ukraine “poses a threat to international peace and security”. It accused Russia of invading Ukraine. The accusation was made with no proof  no video, no pictures. It demanded the withdrawal of Russian forces from Ukraine, even though there was no evidence the Russian army was ever in Ukraine.

The Congress resolution called for government change in Russia, and for the return of Crimea to Ukraine and the return of Abkhazia and South Ossetia to Georgia. It called on NATO to increase its war-readiness and referred to Ukraine as a US ally, despite that country not being a NATO member.

Paragraph 14 of the resolution stated with certainty that the Malaysia Airlines flight 17 that crashed in Ukraine was brought down by a missile “fired by Russian-backed separatist forces in eastern Ukraine”. But the final report into this tragedy has not been produced. The preliminary report – conducted with the participation of all countries involved – did not state that a missile brought down the plane. Neither did it assign blame to any side.

The resolution urged the government in Kiev to resume military operations against Ukraine’s eastern regions, calling for the “disarming of separatist and paramilitary forces in eastern Ukraine”. This would mean the deaths of many more civilians.

Unmentioned is the role of Kiev’s forces, including its Azov battalion. According to a Daily Telegraph report last year, it uses the neo-Nazi Wolfsangel (“wolf’s hook”) symbol on its banner, and its members vary from plain anti-Semitic and white supremacist to Nazi, complete with SS tattoos. They are recruited from all over Europe.

Ukraine’s government is happy to use the neo-Nazis. “The most important thing is their spirit and their desire to make Ukraine free and independent,” said Anton Gerashchenko, an adviser to the interior ministry.

The Congress resolution also called for direct US involvement in the conflict by urging the US president to “provide the government of Ukraine with lethal and non-lethal defense articles, services, and training required to effectively defend its territory and sovereignty”. This means US weapons in the hands of US-trained military forces engaged in a hot war on the border with Russia.

War, if it happens, could go nuclear. According to the German Sunday newspaper Frankfurter Allgemeiner Sonntagszeitung, NATO defence ministers have discussed “the nuclear threat scenario from Russia in the past few months”. The ministers “will for the first time discuss the consequences for the nuclear strategy of the alliance”.