We need to talk about pay 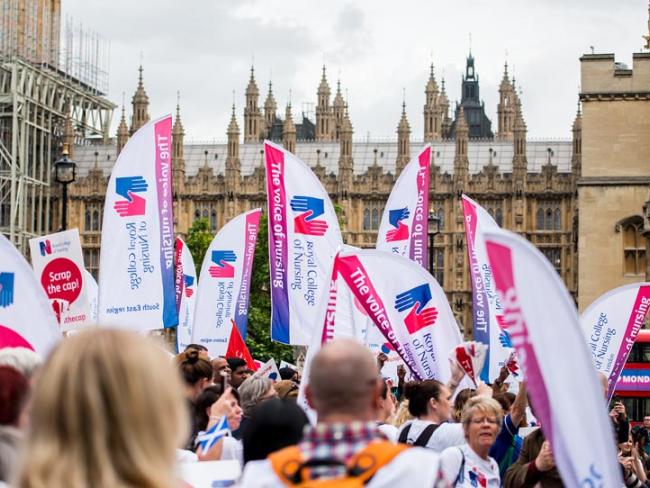 6 September 2017: nurses call for a pay rise and an end to the government cap. Photo John Gomez/shutterstock.com.

At a time when many in the country are becoming alive to the possibilities of control in the context of Britain and the European Union, collective control of pay is at a low point. That has got to change…

This offers great opportunities for workers but union leaderships are still in denial. Most continue to bleat their support for the EU, even as the evidence that it has harmed workers is staring them in the face and with poverty in employment rife.

In October 2018, when the Office for Budgetary Responsibility published yet another set of economic forecasts, the TUC put out a press release with a quote from general secretary Frances O’Grady.

The headline was “Wages not set to recover [from the crash of 2008] until at least 2024”. Grim news indeed, but the comment from O’Grady typified everything that is wrong with TUC and most union approaches to wages.

“This would mean workers waiting a total of 16 years from the financial crisis in 2008 until their pay is fully recovered – the longest wage slump in 200 years,” said O’Grady. She then accused the government of having “abandoned” working people.

Well, that’s what capitalist governments do, consistently. And until recently, trade union members have made it their business to organise the fight for wages. Not so much now: unions tend to stand on the sidelines and complain that government and employers aren’t being fair.

At the root of the problem is the members’ unwillingness to take collective action to improve their pay and conditions. But trade unions must be living in a strange fantasy world if they think that the answer is to turn to the state for salvation.

Yet that is precisely what O’Grady did. In her quote, she called for more government action – an increase in the minimum wage and “giving unions the freedom to enter every workplace and negotiate fair rises”. What she didn’t say (of course) is that the squeeze on wages has operated most firmly in the areas that are most highly unionised: the civil service, local government, education and health.

The one area that the TUC will not and dare not touch is the impact on pay of the free movement of labour. Nor will most of the unions, though Len McCluskey of Unite reportedly gave examples, privately, of downward pressure on wages to Labour MPs in December 2018.

At the start of the year, the Office for National Statistics (ONS) reckoned there were 3.54 million non-UK workers in Britain, with 2.29 million of them from the EU. It beggars belief to imagine that such an addition to the supply of labour power won’t have an effect on its price.

That figure has reduced, most likely due to Brexit and the fall in the pound. The ONS labour market figures for November 2018 showed a net annual decrease of 98,000 foreign workers – with the Office noting that the drop in EU nationals working here was “the largest annual fall since comparable records began in 1997”.

'The one area the TUC will not and dare not touch is free movement...'

The result: early December 2018 saw reports that pay in October had risen 3.3 per cent over a year ago (though that includes some bumper City bonuses and increased overtime as well as rises in pay), its fastest rate since 2008.

Meanwhile, the Low Pay Commission – set up by the government – continues to proclaim the virtues of the National Minimum Wage (which applies to workers under 25) and the National Living Wage (for those 25 and over). But look closely at its latest report and you see that these wages are by no means minimums.

According to the Commission, 23 per cent – almost a quarter – of workers covered by the National Living Wage are receiving less than the prescribed minimum. And when the Commission last looked at variation across Britain, they found that underpayment was highest in the South East (yes, the “prosperous” South East).

Meanwhile, in large swathes of the economy the National Minimum Wage and the National Living Wage have become the standard rate – maximums rather than minimums. The fact is that the minimum wage is a government device to force down wages.

And it’s damaging the country as a whole, not just working families. According to the Low Pay Commission “productivity growth has continued to be weak”. Specifically, measured either by output per worker, per hour or per job, it has been just 2 to 3 per cent since the onset of capitalism’s latest financial crisis in 2008 – whereas it was 2 per cent per year before 2008.

That’s hardly surprising, given the wage stagnation since 2008. As Karl Marx noted over 150 years ago, if the price of labour stays low capitalists won’t bother with investing in more productive machinery.

Workers need to ask themselves where this is all leading. In large parts of white-collar private sector work there is simply no control over pay at all. Wage increases are sought, in the main, not by collective action but by individual approaches to the boss or simply moving to another employer. Excess hours are worked as the norm, without overtime payments or time off in lieu.

With manufacturing industry shrinking, union organisation is concentrated in the public sector and transport. Yet in teaching and the civil service there is virtually no negotiation over pay at all, and it’s not much better in health and local government.

There have recently been improvements to pay in health. But meagre though the rise in NHS pay is, it opens still further the gap between pay in health and social care pay rates.

Social care, which until Thatcher was mainly supplied by local authorities, is now provided by a plethora of tiny, medium and massive companies. These have three things in common: they’re in the business to make money, not provide a service; they pay the lowest pay they possibly can; and they pay it almost exclusively to migrant workers, who will tend not fight for a pay rise because the lowest pay in Britain is invariably substantially higher than in their countries of origin.

Hence the panic at the prospect of any kind of Brexit spreading among these companies and the sycophantic liberals who commission their services.

So far this “campaign” has not got off the ground, and nor is it likely to if it is not driven by the workers themselves, which at present it shows no sign of doing.

That is why we need to talk about pay, because workers themselves are the ones who will need to fight for it. It won’t happen otherwise.

It’s no surprise that the principal unions whose members are actively seeking to exert control over their wages and conditions – the RMT and Aslef – are among a very few unions welcoming the prospect of an independent Britain free of the EU.