A worker’s life in struggle 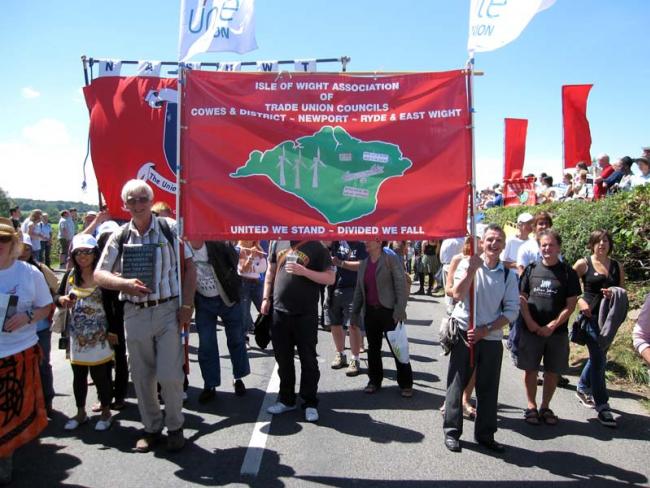 Trades council banner in one hand, Workers in the other: Bob at Tolpuddle, 2010. Photo Workers

Bob Blocksidge was an electrician, lifelong trade unionist and communist. Over 100 family members, trade unionists and Party comrades attended his funeral on the Isle of Wight in August.

An organiser to the last few days of his life, he had set out speakers for the funeral from Party, Unite, Trades Union Council and friends. The following is the abridged speech from the Communist Party of Britain Marxist-Leninist speaker:

Bob joined the Party when he was 22 years old in 1968. He spent all his life recruiting and organising among workers as a trade unionist and communist.

His life epitomises Britain’s trade union and industrial history. It epitomises also Britain’s industrial decline and decay deliberately connived at by politicians of all political parties.

Bob started work for the Westminster Dredging Company based in Liverpool. There they built what was then the largest dredger in the world. When it sank off Australia and the dredger was brought back 12,000 miles to be refitted, because Liverpool’s shipyards embodied the best in skill and expertise at that time.

Such skill and expertise is now destroyed: the European Union decided that Liverpool was not needed as a port in their grand scheme. Therefore the Mersey didn’t need to be dredged and the Westminster Dredging Company went bust.

Every workplace which had the privilege to employ Bob sacked and blacklisted him because he built workplace organisation for the electricians union in its various guises and latterly in Unite. He built joint trade union organisation without sectarianism or divide, a unity based upon principle, honesty and integrity. Those qualities are sadly too often missing amongst sections of our trade union fraternity today.

Students of the British working class should study the history of someone who worked, organised and fought in nearly every major struggle during the 1970s and 1980s on Merseyside: at Dunlop, British Leyland, the Merchant Navy, Fisher Bendix, Turners Asbestos Cement and so on.

Bob was a leader within Liverpool Trades Council before trotskyite sectarianism and idiocy split the city’s labour movement. Michael Edwardes, who oversaw the demise of British Leyland and Britain’s coal industry, tested his tactics out on Merseyside with the closure of the British Leyland Speke factory. Bob was at the forefront of the fight against the deliberately created decline on Merseyside. He recognised that the destruction of industry resulted in the destruction of working class organisation.

Blacklisted in Liverpool, he ended up on the Isle of Wight. A similar process followed: organise, get workers to take responsibility, get workers to join their union and feel their collective strength, get workers to assert their power. A further round of blacklisting followed: at FBM Marine, the dockyards in Portsmouth, Southampton, Poole and so on.

Bob is like millions of working men and women whose history is not written in school textbooks. There are no monuments to them but they epitomise this nation. They epitomise all the nobility of thought, integrity and humanity workers bring to this world of greed and its dog-eat-dog philosophy of the marketplace. They do not take on these tasks for self-aggrandisement or false honours but because as a class we must do so to survive with dignity and as human beings.

His instinct, trust and belief in his fellow workers never wavered, nor did his sense of humour. Bob wanted to hold a public meeting for the Party on the island. Laughing, he suggested today’s occasion would be the first: his difficulty was agreeing the time and date of his demise. It was finally agreed: he would chair but not take questions.

He laughed at all those grandiose motions of support passed in meetings before you discover no one is actually behind you as you walk out of the factory gate. Learning to laugh at the tribulations and pitfalls life brings was one of his strengths.

He was always the undefeated one when all others around him were defeated. Bob recognised that basic lessons: unity, organisation, discipline were the bedrock on which we as workers build our ideology in opposing the capitalist world we live in.

Bob talked of a simple lesson learnt when he was a young steward as the basis of teaching the next generation of workers: “Ask a question every day, learn something new and forget nothing”. He always returned to the principles of being immersed in the collective strength of workers, and always having your feet on the ground.

Keep his memory by being in your appropriate trade union; teach your children and grandchildren why the union is so vital. Learn more about the communism which Bob carried in his heart and promoted in every struggle he engaged in. Stand up, as he did, for our rights as British workers and realise we can and must run this country.

Hands off Syria!
After the vote - Rebuild Britain
Russia’s not our enemy
What democracy really means
Strike call in NHS England