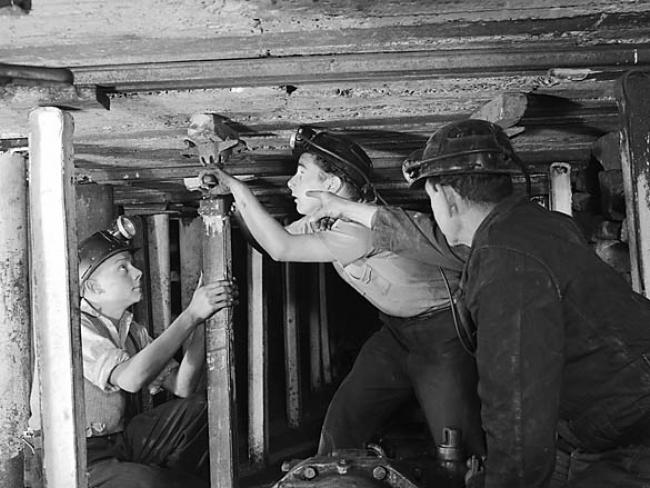 Miners being trained at the Aberaman training centre near Merthyr Tydfil, 1951. Public Domain.

With another set of reforms to the NHS in prospect, it’s worth looking at what workers did for themselves in the past…

Before the Second World War, the great majority people gained access to medical care as individuals. A comprehensive system did not exist to manage demand and to coordinate provision. And the quality and availability of health provision depended on income and relative poverty.

At the end of nineteenth century medical care came through different routes; these did not change much until the National Health Service was introduced in 1948. About 5 or 6 per cent of the population relied on basic local provision through the poor law and 10 to 15 per cent had free care from charitable institutions. The most common arrangement, used by about three-quarters of the population, was mutual aid. The remainder, less than 10 per cent, paid fees to private doctors according to income or used prepayment schemes based on a fixed annual fee.

Outpatient departments of the voluntary hospitals were greatly used. For instance, in 1887 there were 1.5 million outpatient attendances at London voluntary hospitals; 162,000 consultations at 26 free dispensaries; 102,000 at part-pay dispensaries. A government survey of 1910 showed many people turned to unlicensed medical practitioners as well, including chemists, bonesetters, Christian Scientists, faith healers, abortionists and so on.

Social solidarity was always indispensable for working class communities if they wanted to make improvements or gain a better existence. Collective, not individual, initiatives were undertaken because they offered a greater chance of advance in a political landscape of profit making.

You only need to think for example of working class cooperation and involvement to get decent housing through coops, building societies and council housing schemes, or to improve health care provision through “club doctor” arrangements.

So how did workers in South Wales manage to improve safety precautions and health provision during the period from 1880 to 1939? And also to provide one of the inspirations for the NHS?

The area was heavily industrialised but had a boom and bust economy. That was mainly because it relied on a single industry – coal – which in turn depended on unstable and price-sensitive export markets.

The period from the 1890s until 1920 saw rapid expansion for the coal industry. It employed a quarter of a million men in Wales at its peak in 1921. But then came the recession as overseas markets began to shrink. Many pits closed and in others the owners sought to reduce costs by cutting wages, increasing hours and introducing mechanised cutting and conveyors. By 1933, employment in the industry was only half of the peak level.

Miners and their families knew that coal owners could not be relied upon to promote safety in the pits as they were driven by lust for short-term profits. Miners feared for their safety from the dangers of roof-falls and gas explosions. They saw that the existing system of a government inspectorate had limited effectiveness, particularly in the vital aspect of enforcement.

A Royal Commission on mines was appointed in 1906 due to the number of underground accidents. Its report in 1909 suggested increasing the numbers of the existing inspectorate. But the federation of mining unions – with the South Wales miners prominent – lobbied for a different approach. They wanted miners to be able to choose their own safety inspectors. These would have the legal right to go anywhere in the mine to ensure that safety regulations were enforced. This was a different and independent minded approach, making the workers actually involved and taking risks at work responsible for policing pit safety.

The Liberal government accepted this proposal in the 1911 Coal Mines Act. Initially these Workmen Inspectors, or Union Inspectors as they came to be known, were paid salaries by a group of local lodges (union branches): two local inspectors would oversee safety at a group of pits. Eventually the salaries of the Inspectors were met out of Miners’ Federation funds. The Union Inspector posts were frequently a haven for men blacklisted by the coal companies for their union activities.

‘Union inspectors were instrumental in reducing injuries and deaths…’

Colliery managers tended to be antagonistic towards the Union Inspectors. This led to frequent struggles to ensure they were able to do their job properly. But after the introduction of the Workmen Inspectors the coal industry saw big improvements in safety through the 1920s and 1930s. Union inspectors were instrumental in reducing injuries and deaths from roof-falls and gas explosions by ensuring precautions were taken, raising safety standards and opposing the boss culture of cutting corners for profit.

These attempts to improve pit safety in South Wales mining communities were successful because they were based on mutual support and mutual struggle to overcome management obstruction. Self-reliant collective efforts were necessary; partnership with the coal owners did nothing for pit safety. Miners did not trust the coal owners and managers to promote pit safety. Nor did they wholly trust the government inspectorate; they only trusted their own representatives.

It was also common for coal owners to oppose other health measures and practices. They resisted workplace examinations of employees to detect cases of Miners’ Lung (silicosis). The Miners’ Federation spent more than 10 years engaged in political lobbying, legal arguments and gathering epidemiological data. Finally pneumoconiosis due to coaldust inhalation was recognized in 1943 as a an industrial disease, which enabled their members to receive compensation.

The South Wales Miners’ Federation began in 1898, but by 1914 it was the largest union in Britain, reaching 198,000 members in 1921. The centre of pit village life in the mining valleys was the union lodge which fostered collective responses to many community difficulties.

Many houses in mining areas were built by coops and Lodge officials were often consulted about council house allocations. The miners elected their own leaders to the Boards of Guardians who administered Poor Law relief, which helped at times.

For example at the end of the 1926 lockout the Bedwellty Board provided relief for destitute miners and their families against government instructions. These guardians were eventually removed by the government.

Miners also set up “club doctoring” schemes such as the Tredegar Medical Aid Society. These varied in coverage but typically provided primary and secondary healthcare, dentistry and midwifery services for all subscribers and their families. This was unrivalled in Britain at the time for working people. Again, importantly, management of the scheme was organised entirely by the mine workers themselves.

The Tredegar Workmen’s Medical Aid and Sick Relief Fund was founded in 1890, bringing together a number of schemes run by benevolent societies in the town and the Health and Education Fund that had been set up in the early 1870s by the Tredegar Iron and Coal Company.

There were a number of similar company-based schemes in South Wales at the time. Employees of mines, iron and coal firms paid a small proportion of their wages. In return they received medical care when required, for themselves and their families. The scope of cover varied from scheme to scheme.

Following the merger of the town’s schemes and the combining of their funds, membership of the Tredegar Workmen’s Medical Aid and Sick Relief Fund increased, and by 1901 the Fund proposed that a hospital be built in the town. Built on land donated by Lord Tredegar and paid for by the Tredegar Iron and Coal Company, Tredegar Cottage Hospital opened in 1904 and was run by the Fund with weekly contributions from ironworkers.

The influence of the company was quickly eroded with miners soon running affairs. After the National Insurance Act in 1911 introduced unemployment benefit and sick pay, the Fund no longer provided sick pay. It became a benevolent society known as the Tredegar Workmen’s Medical Aid Society.

In the same year the society opened a Central Surgery with consulting and treatment rooms, a pharmacy, a waiting room and accommodation for two doctors and their families. This was an important provision in a period where poverty was a reality or a frequent threat for a large majority of working people.

The society opened an office in the town and membership grew to more than 20,000. In 1925 it bought an old cinema and converted it into an extra surgery. By the 1930s the society was supplying medical aid to 95 per cent of the population – including members’ families and retired workers. It then employed five doctors and two dentists as well as pharmacists and nurses.

In the 30 years before the NHS existed the Tredegar Medical Aid Society catered for the medical needs of the people of Tredegar. The way it did so became a great source of inspiration for the creation of a national health service – notably the benefits of a health service free at the point of use.

After the NHS was set up, the Tredegar Workmen’s Medical Aid Society might understandably have been wound up. But it continued, providing benefits for members, such as grants for specialist treatment and for convalescence, as well as donating equipment to the town’s hospital. Membership dwindled over the decades and it was wound up in 1994; the remaining £7,000 in funds was donated to Tredegar hospital.