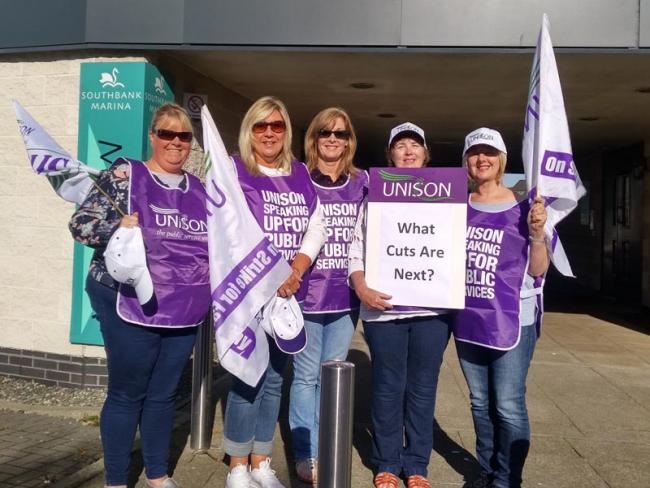 Council workers in East Dunbartonshire on strike against cuts in public services in 2018. Now a document for the Scottish TUC seems to suggest increased Westminster funding for services in Scotland are a plot to weaken devolution. Photo Simon Macfarlane.

A document prepared for the Scottish Trades Union Congress’s annual meeting on 17 November, being held online, has been leaked to the Sunday National.

The document says: “Public services desperately require more funding, but the intention of the UK government to increase direct spending in Scotland in areas of devolved competency is a clear attempt to weaken the devolution settlement.”

Why would the Scottish TUC even consider opposing Westminster’s plans to increase direct spending in Scotland claiming that it would “have a negative effect on workers”? For decades, our unions have called on successive governments to increase public spending, but when this government plans to do just that, the STUC wants to stop them doing so.

The STUC even contradicts itself in another statement in the same document that: “No-one in Scotland can afford to wait for the outcome of a future referendum, rebuilding the economy and the people’s recovery must begin now”.

The document is disingenuous about the STUC’s position on a second referendum or the outcome. It argues on the one hand that “it is difficult at this point to imagine the trade union movement in Scotland emerging with a consensus for a particular option in a future referendum” while at the same time it is vociferous in its opposition to “any moves which reduce the powers of [Holyrood]”. It says it will campaign “for the extension of devolution in agreed areas such as employment law, equalities and aspects of immigration”.

The same leaked document also said that the STUC believes that if “there is evidence of a majority in support of independence” and if the new 2021 parliament has a majority of members in favour of a second referendum, then the case for a second vote would be “unanswerable”.

The SNP has no right – least of all a legal right – to call a referendum. Only the UK government can do that. A devolved electoral process cannot deliver a mandate for the reserved matter of the Union of Scotland and England (Scotland Act 1998 Schedule 5 Part 1 (b).

According to the Institute of Government the devolved administration only has a mandate for devolved matters, not for a secession referendum, still less for a secession.