Why trade unionists should vote to leave 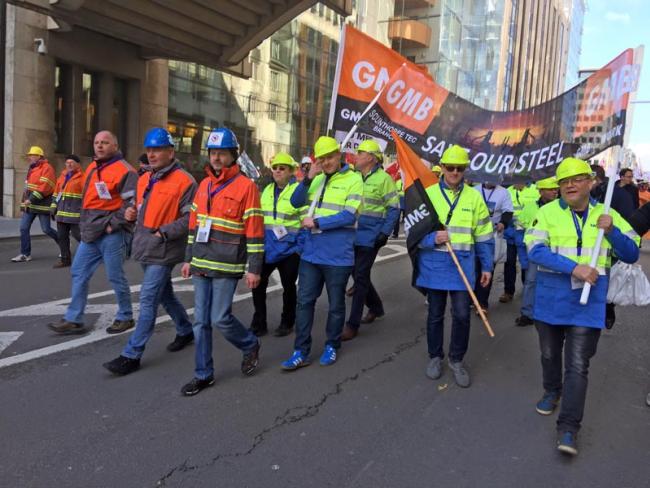 Monday 15 February: Steel workers from all over Europe converged on the European Commission in Brussels demanding action to save the industry. Photo Workers

One of the big lies of the European Union is that it is somehow good for workers. In fact, the EU is attacking the foundation of all progress at work – the right to effective collective bargaining…

Why should trade unionists vote to leave the EU? The reasons are, or should be, broadly the same as anyone else’s: because it’s bad for Britain and bad for the working class. The European Union is a capitalist club, formed by capitalism for capitalism. It means us no good.

But while polls show most union members are against EU membership, their own unions are almost all for it. Why is this?

There is nothing at all in EU law that gives any more protection than national legislation to the right of trade unions to freely represent their members and bargain on their behalf. There is absolutely nothing extra to protect the right to strike.

In principle, EU law asserts the right to collective bargaining. But it acts only to protect the fundamental freedoms of business, enshrined in EU treaties: the rights to provide services, to establish a business, to move labour, to invest (and de-invest) where they want.

In Greece, the European institutions have intervened against the right to collective bargaining – reducing the role of trade unions in setting the national minimum wage, removing automatic indexing in line with price increases, and imposing a reduction in the minimum wage itself. Call that protection?

What are the pro-EU unions saying? Unite produced a leaflet for the last European elections, the one where about two-thirds of the electorate didn’t vote. Headed “What has Europe ever done for us?”, it makes 10 points…a handy crib sheet – and a breathtaking collection of lies and half-truths. A proper dodgy dossier.

1. Protection at work. “You are safe in your work place from dangerous machines, chemicals or any other risks to your health,” it says. You’d think that there was no history of struggle over health and safety until the EU came along. And even the EU’s European Agency for Health and Safety at work says, “The foundation of the current health and safety system was established by the Health and Safety At Work etc. Act 1974.” So, no thanks to the EU. In fact, few of us are actually safe in our workplaces unless we organise to make it so.

2. Holidays. “Europe is responsible for making sure you get 28 days paid leave a year,” says Unite. A European Directive specified a minimum of 4 weeks’ holiday including statutory public holidays. Our legislation has a minimum of 4 weeks plus statutory public holidays, ie 28 days. So the government could reduce the minimum holiday entitlement by over a week and a half any time it wanted to, in the EU or not.

4. “Fairness at work – all workers get the same rights, it doesn’t matter if they are full-time or part-time, temporary or permanent, in-house or agency.” It’s hard to know what this means. Which rights are they talking about?

5. “Sickness rights – you don’t lose out if you are ill when on annual leave”. This is true, but it was in good collective agreements before the EU stepped in.

6. “Equal pay – men and women must be paid the same for doing the same job.” It’s ludicrous to say that we have equal pay rights courtesy of the EU. What we have, we have courtesy of class struggle, most notably the Ford sewing machinists’ strike of 1968, which prompted a panicked response from the government which came up with the Equal Pay Act of 1970. But men working full time in Britain still earn 14.2 per cent more than women. Including part-time employment, the gap is 19.1 per cent. Whatever “rights” capitalism says we have, they mean nothing unless we fight for them. And of course like holidays, hours and sickness rights, this doesn’t apply to the 15 per cent of workers who are formally self-employed.

8. “Parental leave – new parents are entitled to time off work to look after their children.” But parental leave, unlike paternity leave, is unpaid. No wonder 90 per cent of men don’t take it up.

9. “Discrimination – protection from you being discriminated against for you[r] age, gender, race, sexual orientation or if you are disabled.” Protection? They must be joking. Black graduates earn 23 per cent less than white graduates according to TUC research.

10. “Healthcare on holiday – protection if you get ill when you are on holiday, you won’t have to pay for your healthcare”. Actually NHS UK says, “... you may have to make a patient contribution to the cost of your care, unlike in the NHS.” Britain also has negotiated reciprocal health agreements covering tourists with 16 countries outside the EU.

A boss but no exploitation?

So that’s what the EU has done for us! Virtually nothing. Turn over the page and Unite general secretary Len McCluskey says the EU “gives us the laws and legislation that stop you being exploited by your boss and protect you on a daily basis.” In fact, the day we stop being exploited by the boss is the day we expropriate the bosses and run the country for our own benefit.

So much for the supposed benefits. Let’s look at 10 things the European Union is doing for us that we’d rather it didn’t.

1. It’s negotiating – in secret – the TTIP treaty with the United States that would hand sovereignty over international trade and investment to transnational corporations, open up health and education to irreversible privatisation, and lower environmental standards.

2. It’s also negotiating – again in secret – the TiSA treaty (see article, p 12) with the United States and 22 other countries that will do for services what TTIP will do for goods. It will ease energy regulation – making a mockery of climate change targets, harmonise environmental standards down (not up). It will allow companies to shift professional workers from country to country, and pay, for example, Indian workers Indian rates to work in Britain.

3. It is opening borders to cut wages and boost profits, along the way stripping countries of much-needed resources. Romania had 20,000 doctors in 2011 – by 2013, just 14,000. Along the way, it is allowing employers in Britain to recruit workers from EU member countries, and what’s more, if they wish, to the exclusion of British workers. (To be clear, we define as British workers anyone working in Britain and established in Britain.)

4. The EU’s austerity programme has enforced “structural changes” in the labour market in the countries that have taken up its bailouts – Ireland, Greece, Portugal, and Cyprus. In other words, it has forced through reductions in individual workers’ rights and in the scope and effectiveness of collective bargaining. It’s truly the anti-union Union.

6. The EU has enforced privatisation of public services such as energy generation, rail and the post. See, for example, EU directives 91/440 on transport, and 97/67/EC on mail. And once privatised, they have become the milch cows of foreign companies…often foreign state companies.

7. EU law does not help trade unions. Nothing whatsoever in the government’s current Trade Union Bill runs contrary to EU law. No salvation from Brussels here. But the EU may well introduce such law to apply all over the EU.

8. It’s worse than no salvation. It’s positively lethal. Listen to the leading British labour lawyer John Hendy – dubbed “the barrister champion of the trade union movement” in trade journal The Lawyer. He says, “The EU has become a disaster for the collective rights of workers and their unions.” The bottom line is that in EU law Article 16 of the Charter of Fundamental Freedoms – “the freedom to conduct a business” – trumps everything else.

9. The EU is doing the US’s work in Europe. Some people seem to think that the EU is some kind of counterweight to the US, a social alternative to American imperialism. Nothing could be further from the truth. The US is an ardent supporter of the EU. Barack Obama and his officials are constantly saying that Britain must stay in.

10. The EU is a force for war. The German-led break-up of Yugoslavia led to an estimated 140,000 deaths. Potentially even more disastrous was the EU’s promotion of the 2014 Maidan coup in Ukraine, brought about by the democratically elected government’s failure to sign an association agreement with the EU. The EU is a force for war because it seeks ever greater expansion on the one hand, and the imposition of its market-forces led model on the other.

The first is international solidarity. When we voted to stay in the European Economic Community in 1975 it was the worst thing the British working class has ever done to fellow workers of Europe. Never mind the consequences for us – for them it meant the political domination of the City of London, the centre of finance capital, and the centre of reaction. The City has been behind just about every EU directive on privatisation, every negotiating stance on TTIP and TiSA. That’s not conspiracy theory; it’s the way it works.

Take Britain out of the EU, and you take the City out of it too. That really would be an act of solidarity with our sisters and brothers across the Channel.

‘Take Britain out of the EU, and you take the City out of it too.’

If workers were exerting their own will, we would be planning for a future outside the EU in which the distortions forced upon our economy while we were EU members can be steadily corrected.

We should do the things we are good at doing: making, inventing, developing culture, educating, ensuring the health of our population, teaching English to the world. We should start catching and protecting fish again in our own waters, use our coal safely and cleanly, and stop being a source of unskilled labour.

We trade more with the rest of the world than with the EU. The EU takes 44.6 per cent of our exports, and the trend is down…in 1999 it took 54.8 per cent. Three-quarters of our imports from the EU are goods rather than services. Our industry and agriculture are being hollowed out. Our future is with the world.

The EU has been utterly negative for workers. Its dangers to peace are growing daily. Now we have a vital chance to reject this EU and all it stands for. A referendum vote to leave would mark the beginning of workers here asserting our right to plan our own future.

There is no reason why we cannot leave the EU and prosper. So let’s do it.

• This article is an edited version of the full speech given at a CPBML public meeting in London in February 2016. The full text of the speech, with hyperlinked references, is available at here and at cpbml.org.uk/past-events