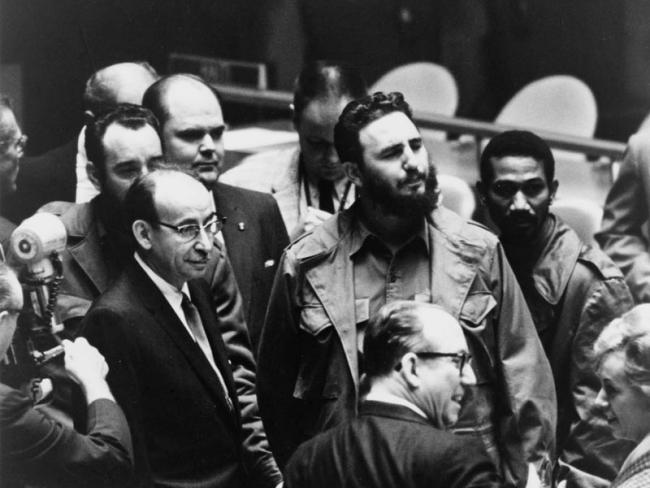 The world only began to understand Castro after his speech to the UN General Assembly 21 months after the Cuban Revolution, which he led to victory…

The world of 1960 was used to Latin American “revolutions” that were either reversed by the United States or simply failed. After his speech, that same world knew that Fidel Castro was aware of this, especially after the fate of the Guatemalan Government of Jacobo Arbenz, overthrown by a CIA-organised coup in 1954. Arbenz’s crime in the eyes of the US was to introduce land reforms to give many of the peasants ownership of the land they worked.

The Cuban Revolution itself had already embarked on similar land reform, nationalising the land and giving the plantations to those that worked them. In doing so, Cuba reaped the wrath of US capitalists such as the United Fruit Company and sugar plantation owners. Cuba had also embarked on a programme of free universal education and health, considered anathema by the US.

Castro’s speech, given on 26 September 1960, started by expressing the hope that other nations’ UN delegations had not been treated like the Cuban delegation in New York. They had apparently been evicted from one hotel and barred from all the other hotels in Manhattan. They eventually found the only hotel willing to accommodate them in Harlem, a home of New York’s black population. Fidel and his delegation were well aware of the history of the descendants of African slaves, because Cuba’s history was all about slavery. His delegation was treated with respect by his new hosts.

“Do away with the philosophy of plunder.”

Perhaps the most significant part of his speech was when he described how the Cuban people had fought for their independence from Spain for 30 years, only to have it snatched from them by the US at the final moment. He told the General Assembly that when the Spanish were on the verge of defeat in 1901, US troops entered Cuba to secure the victory for themselves. The US refused to leave the country until Cuba agreed to insert certain clauses into its new constitution.

These clauses, stipulated by an Act of the US Congress that became known as the Platt Amendment, were forcibly incorporated into the laws of Cuba – seven clauses altogether which banned it from making treaties with other countries, controlled the Cuban budget deficit, forced it to sanitise cities and ports to prevent diseases from spreading to the US, gave the US the right to intervene in Cuba to protect property, and forced it to lease Guantanamo Bay to the US as a naval base.

There was an extra clause making the seven clauses permanent, but the main infringements of Cuban sovereignty were the right of the US to interfere in Cuba’s economy, the right of the US to intervene in Cuba militarily and the right to permanently lease a naval base. Castro told the General Assembly that these clauses effectively made Cuba a US colony in the same way as other former Spanish colonies like Puerto Rico and the Philippines. The US, he went on to explain, then acquired all of the best Cuban agricultural land for US companies, concessions of natural resources and mines, concessions of public utilities for exploitation purposes and commercial concessions of various types.

Castro told the UN delegates that the Cuban people had to fight for a further seven years, from 1952 to 1959 to achieve their independence, fighting against the US-backed dictator Batista. And what did the revolution find when it came to power? Mass unemployment and high illiteracy, as well as an appalling lack of education and health care. Most homes had no electricity and farmers paid extortionate rents to landowners. The country’s reserves of $500 billion had been reduced to $70 billion overnight. He described how it was necessary to nationalise the electricity generating industry and telecommunications, which were owned by US corporate monopolies.

Castro then addressed problems around the world. He gave a clear Marxist-Leninist analysis, siding with the working class against monopoly capitalism. He backed the liberation movement in Algeria, saying Algeria will never be part of France. He backed liberation movements across Africa, Asia and Latin America. He condemned capitalism, imperialism and the threat to war they posed. He went on:

He condemned the behaviour of the US government across Latin America, for commercial concessions won at the point of a gun. He demanded the Peoples Republic of China be represented in the United Nations.

His speech made it abundantly clear to Cuba’s neighbour to the north, the US, that the Cuban Revolution would not be going the way of Jacobo Arbenz’s in Guatemala. In fact, the applause he received for his speech suggested to the US that he might enjoy widespread support around the world.

The US retaliated a few weeks later with an economic embargo that lasted for 55 years until it was partly lifted in 2015. And in April 1961 the US launched the failed Bay of Pigs invasion. But the Cuban Revolution and Fidel endured. He went on Cuban TV in December 1961 to tell the Cuban people that he was a Marxist-Leninist, and would be until the day he died.