Skip to main content
Home » News/Views » An artist of note: Turner and the new £20

An artist of note: Turner and the new £20 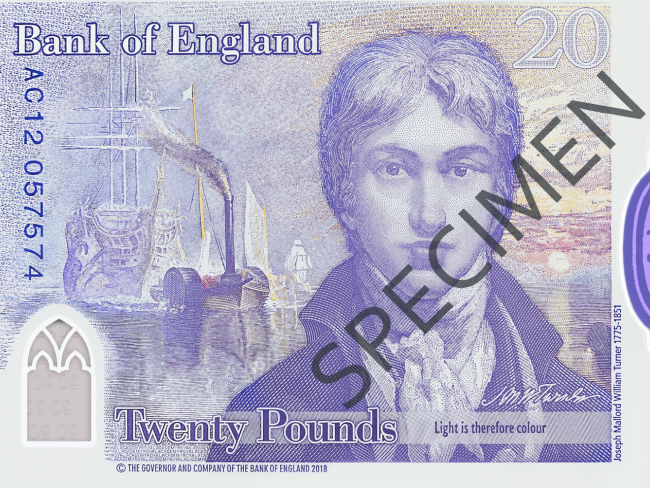 Turner's self potrait on the note. Image The Bank of England

The new £20 note and its subject, JMW Turner, are celebrated in an excellent online lecture by Nicola Moorby. She explains the significance of Turner as an artist and his understanding of Britain and industry as well as the skill and expertise of the bank note designers. And our sovereign currency is used to communicate all these messages!

The Bank of England introduced the new £20 note this February. As part of its Lectures at Home series, the Arts Society invited Nicola Moorby, an art historian and Turner specialist, to talk about the subject of the new note.

Moorby makes a number of important observations before analysing the bank note in forensic detail. This is the first time an artist had been represented on any British bank note, suggesting that art is somehow not seen as important as an indicator of greatness. For example when the BBC carried out a poll in 2002 to find the 100 greatest Britons, not one artist figured in the list although there were many writers, musicians and entertainers.

In 1970 the Bank of England started to feature individuals as a security device. Shakespeare, Michael Faraday, Edward Elgar and Adam Smith being Turner's predecessors on the £20 note. The public was invited to nominate an artist for the latest design. Over 600 nominations were received. Eventually Bank of England governor Mark Carney, no less, decided on Turner, describing him as transformative and the single most influential British artist of all time.

Designed by a British artist, Moorby describes the bank note as beautifully composed and rendered. She remarks that the £20 note is the most forged denomination. This would have interested Turner who owned and read a book on forged bank notes.

Moorby methodically examines each aspect of the note from Turner's self portrait to the image of The Fighting Temeraire worked in to the design. She also draws political conclusions about the significance of Turner's work.

Moorby described Turner has having created an ode to Britain and what made Britain great. She speaks of the elegiac poignancy of the sunrise/sunset motif which reflects the resilience, the tenacity of spirit and the British people’s ability to adapt and evolve. She reminds us that the painting of HMS Temeraire was of its last voyage, destined to be broken up and its parts reused and recycled.

She also describes the highly advanced techniques which have been used to produce the bank note, including holograms and UV light. As an embellishment you can see the note as live artwork using Snapchat. The note uses a quote from an 1818 lecture by Turner, “Light is therefore colour”referring to the innovative use of light, shade, colour and tone in his pictures. This note is a tribute to his vision.

So for £20, we can possess a little piece of British art. How right we were to reject dumping our currency in favour of the euro.