Skip to main content
Home » News/Views » Battle on the railways

Battle on the railways 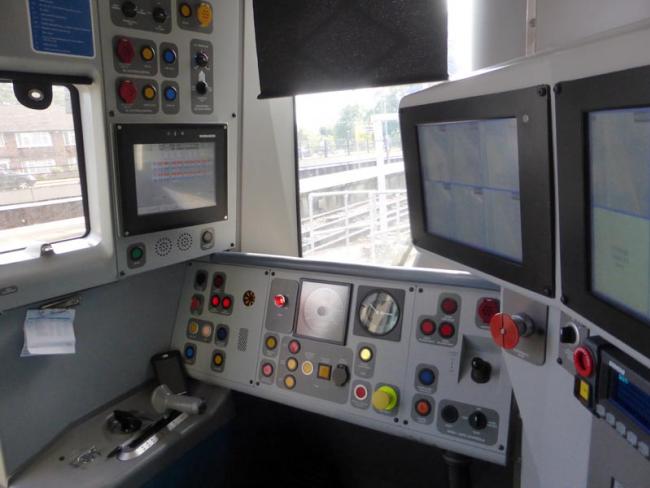 What the driver has to look out for: interior of a Govia Thameslink train (class 386 Electrostar), showing all the screens the driver has to monitor – on top of driving the train. No wonder rail workers are fighting to retain guards. Photo Train Photos (CC-BY-SA 2.0)

A government-inspired cost-cutting move to do away with safety-qualified guards on trains across the various private train companies that run the country’s national rail services has been met head on by the RMT, supported by train drivers’ union ASLEF.

The company has also engineered massive disruption in its remaining services to try to force the RMT to accept the abolition of the guard’s role on its services. It has been able to do this because – unlike most other rail franchises – it is run on a contract basis where the government bears the costs of the dispute.

A similar move in ScotRail was dropped after union opposition, with ScotRail accepting that its trains would run with safety-qualified guards. The RMT then offered GTR a similar deal. GTR refused to even discuss it.

ASLEF tried to support RMT‘s position but was thwarted by court action. So it has changed tack and instead gone into dispute over GTR’s imposition of new rosters introduced to facilitate the emergency timetable brought in because of the RMT’s action. The ballot closes on 31 August and is expected to be overwhelmingly in favour of action. ASLEF has made it clear that it is concerned about the safety of driver-only operation (DOO) of trains.

GTR is also trying to cut station staff and close or drastically reduce the opening hours of 83 of its ticket offices. The TSSA is balloting its members for industrial action, and is expected to announce a positive vote on 2 September. The RMT has already completed a ballot of its station members, with 70 per cent voting to strike. Both unions fear for the safety of both staff and passengers as stations are de-staffed.

‘Unions will need to think carefully about their tactics and strategies.’

Passengers are bearing the brunt of disruption. Many have lost their jobs because they can’t get to work. And rather than blaming the unions, they blame GTR for taking hours to complete journeys that normally take minutes, in conditions that would be illegal for the carriage of live animals. Numerous demonstrations have called on the government to kick Govia out and return the railways to public ownership, missing the point that it is the government itself that is orchestrating their misery.

To add insult to injury, GTR’s passengers along with all other rail users have found out that fares will increase by around 1.9 per cent from January 2017. As the government made this announcement, the TUC noted that fares have risen over twice as fast as wages over the past six years, while dividends to the shareholders of the private rail operators have risen by 21 per cent in the last year to £222 million.

The RMT has also been in dispute with Virgin Trains East Coast, privatised just over a year ago, and with Eurostar. The battle with Virgin is over the company’s proposals to cut on-train staff, and a recent ballot saw a clear mandate for industrial action. A softening of Virgin’s position resulted in strikes being called off and negotiations being resumed. In Eurostar, the strike threats by both RMT and TSSA also brought the employer back to the negotiating table.

With the government’s agenda to cut rail staffing enthusiastically driven forward by the private operators, the unions will need to think carefully about their tactics and strategies. They should certainly avoid being pulled into long-drawn-out disputes.

The government has identified the railways as an industry where workers and their unions have too much power, and unions must be prepared for the onslaught to intensify. They will need to pace their responses. That may require them to accept some unpalatable changes as the price for maintaining their organisation and strength.