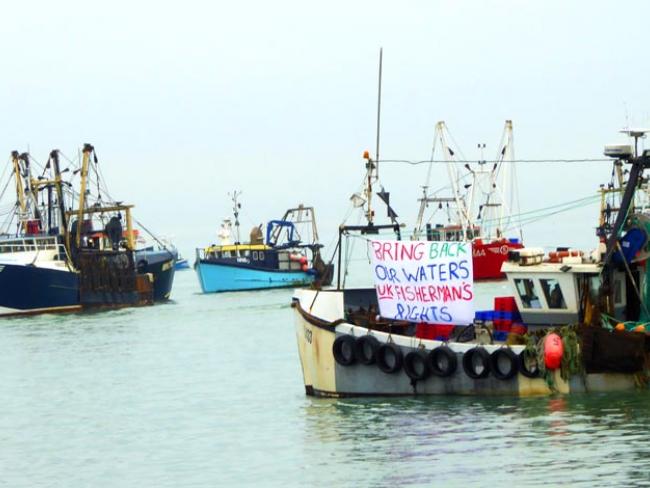 Following the election, campaign group Fishing For Leave (FFL) has issued a powerful new message that the new government has been gifted a huge majority to implement Brexit, and it must deliver, imploring new MPs to remain faithful to their electors and be their constituency’s voice in Westminster rather than Westminster’s voice in their constituency. With a thumping majority, Johnson has no excuse but to retake full control of our coastal waters, something which is made near impossible by the Political Declaration he plans to sign.

In a recent press release, FFL analysed the effects of the proposed “deal” for leaving the EU on UK fishing, and the benefits of a clean break.

That statement refers to a revealing incident in British waters in October. A super trawler, the Margiris, around 14 times the size of British fishing boats, arrived off our coast and began to hoover up fish.

The Margiris is a vast Dutch-owned but Lithuanian-registered floating fish factory. It can net and process 250 tonnes of fish a day, with fishing methods seen as highly environmentally controversial. It was banned from Australian waters in 2013.

On this occasion, the Margiris was boarded by British officials, who found it to be operating legally under EU law. There was nothing we could do to stop it.

Now FFL is alerting British voters to the acute dangers posed to fishing communities by the new Withdrawal Deal and Political Declaration.

Towns in the North East such as Grimsby, Lowestoft and North Shields, along with Hartlepool, Whitby, Scarborough and Bridlington, could see a massive economic boost through leaving cleanly the EU’s Common Fisheries Policy. The CFP permits EU vessels to catch 60 per cent of the fish in our fishing waters, a rich resource to an independent Britain.

FFL estimates that leaving the CFP could give us back access to a catch valued at about £241 million, worth around £1 billion to these towns in terms of processed value. On a national scale the catch value would be around £2 billion, and some £8 billion in processed value.

All this could be thrown away if the Transition as it stands is accepted. It involves obeying all EU law, including the CFP, for potentially up to three years, with the possibility of continuing this on a rolling programme with no end point – and with no control in how it is implemented or enforced.

FFL points out that the dangerous language of the Political Declaration opens us up to yet again to handing over the fishing rights which should be ours under international law.

After the Transition, the Political Declaration requires “cooperation on…regulation of fisheries, in a non-discriminatory manner” (Para 72). This means that the EU will continue to have access to UK waters as at present.

The Declaration talks about agreement over “access and quota shares”; a “level playing field” of regulatory alignment; and fishing to be used as “part of the economic partnership”. All these are mentioned as prerequisites for any trade deal. And CFP “associate” membership will be required (paragraphs 118 and 120).

FFL demands that fishing be removed from any Political Declaration. We must be entirely free of the CFP, with sovereignty over our coastal waters. We should grant access only in return for access to EU waters of reciprocal value.

The EU, says the campaign, must recognise our rightful Zonal Attachment share of North East Atlantic fish stocks. There must be a ban on damaging electric pulse fishing and industrial fishing for sand eels. The economic and social benefits of such recognition are highly significant.