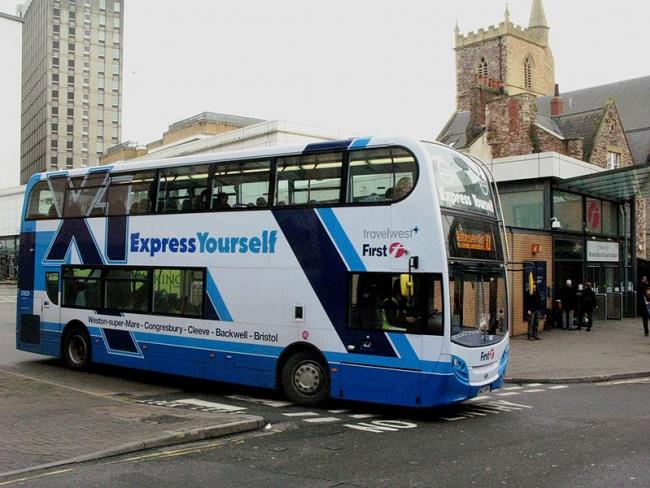 “Public transport not private profit” read one of the placards at a demonstration in Bristol held on Saturday 24 November on College Green outside the Council House. The demonstration drew passengers, bus drivers, and others, and was covered in detail by local paper the Bristol Post.

Protest organiser Frankie Langeland, who decided to put together the rally after she was left feeding her baby at a bus stop because the bus back from her nursery didn’t turn up, said she wanted to turn the protest into a continuing campaign. Scores of angry bus passengers, politicians and transport campaigners braved heavy rain to call for better bus services.

Around 150 people heard speaker after speaker call for an end to the deregulated and de-facto monopoly of Bristol’s buses under private company First Bus.

There was widespread support for the idea that West of England metro mayor Tim Bowles use new powers to create a new franchise system for the region’s buses. This would mean publicly elected officials would be able to say when and where buses run – and that could lead to more routes around the city, not just the highly profitable routes that First run.

The mayor is yet to be persuaded, preferring the notion of a regional transport authority.

Bristol’s lamentable bus service has been the butt of jokes for decades, as any Bristolian will tell you. Now the bus-travelling public is starting to demand involvement in dealing with the challenges of running a successful transport system in a hilly city with lots of potential bottlenecks – starting with the principle of public service.