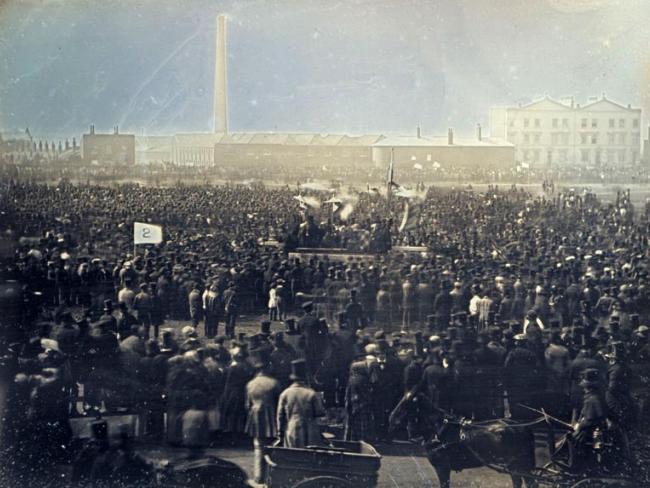 In 1793 the government of William Pitt the Younger launched war against revolutionary France. The war ended in 1815 with the banishment of Napoleon, and his replacement by the Bourbons, who at once waged a “White Terror” and massacred French Protestants.

The war caused the destruction of the ancient republics of Venice and Genoa, imposed reactionary rulers on Norwegians, Poles, Belgians and Neapolitans, and established the Tsar’s domination of Europe. Under his leadership all Europe’s leaders combined in the “Holy Alliance” to crush liberty anywhere. The British government, through that most reactionary foreign secretary, Lord Castlereagh, assisted the Tsar’s efforts.

But while the benefits of the war went to the ruling class, British workers paid, with their lives and in vast taxes, for the war against liberty, and then still after the war’s end with more taxation. Corruption and oppression were as bad as ever.

Pitt introduced the Combination Acts in 1799 and 1800 on the pretext of suppressing Jacobins, supporters of French revolutionaries. But his greater aim was break up workers’ organisation – the acts made trade unions illegal. Workers had begun to fight for higher wages as prices shot up. Political discussion groups such as the London Corresponding Societies had emerged and were also effectively outlawed.

But over time the working class fought back. Alongside many others, the Thames shipwright John Gast organised his fellow workers. The Thames shipwrights were highly skilled, and they organised their trade with great discipline. They led the working class and won for themselves relatively good wages and conditions. Some have slandered such workers as “labour aristocrats”. It implies that somehow greater skill means a worker is not exploited but shares “bounty” with the employer. Wrong!

Artisans across the country, framework knitters, cotton weavers, woollen weavers, and Yorkshire croppers, all fought to maintain apprenticeships. Many also took part in the Luddite movement, which had a high level of organisation.

Gast and his comrades were not against the new machines as such. They fought against the employing class who introduced the machines to increase the rate of exploitation and to reduce the numbers and wages of workers, all to add to their profits. Workers could see that the evil lay not in the machine, but in the class structure of power.

Gast and others launched the Trades’ Newspaper in 1825, run by a committee of trades’ delegates. Its approach was realistic: “Among masters there exists one general feeling to get work done as cheap as they can…”

Gast challenged “what right any man or men has to fix wages of labour, without the consent of the labourers.” He believed that the poverty of the working class had nothing to do with the Corn Laws. He said employers wanted these repealed to lower the price of bread so they could justify paying lower wages. He observed that the supporters of repeal had not explained “how the working classes of society (would) be able to protect themselves against reduction in wages by their employers, which of course would follow, should the present Parliament repeal the Corn Laws.”

Above all, organised workers fought against wage cuts, arguing that higher wages would increase the market for British products. They saw the crisis of “overproduction” not in terms of need, for many Britons needed the products of British industry, but in terms of spending power, for workers could not afford to buy these goods. They knew that workers would increase their spending power not only by winning higher wages but also by ending the huge, unjust inequality of wealth.

Gast and his comrades also challenged the private ownership of land. The country had far too many uncultivated “waste lands”, which could have grown the food the people needed but which did not do so because the landowners saw no profit in it. Workers rightly said that mass hunger, alongside waste lands, proved that the landowning class was not doing its patriotic duty to feed the people. This had become very clear during the war against France.

They also knew that free trade meant competition between British workers and miserably paid foreign workers. That was no different from employers using the cheap labour of less well-organised workers outside London or immigrants to London. A race to the bottom would benefit only the capitalist class.

In many industries the undercutting masters were those producing for export rather than the home market. Workers rightly saw free trade, the focus on overseas markets, and the employers’ use of cheap labour as threats. All led to wage cuts.

The shipwrights’ union retained its control of the Thames throughout the nineteenth century. It rigorously enforced apprenticeship, it kept the gang contract system in full force, and it maintained the new day wage rate which had been secured, and the limitation on hours of work. It forced up the wages for piecework.

At the end of the 19th century, a member of trade union historians Sidney and Beatrice Webb’s research team wrote of the Thames shipwrights that they had “remained for 100 years the same good type of stationary unprogressive body”. Yet these skilled workers had kept control of their pay and conditions for a century. We would call this progressive and something to which workers everywhere would do well to achieve.

• For more on Gast and his comrades see Artisans and Politics in Early 19th-Century London: John Gast and His Times, by Iowerth Prothero, Dawson. Reissued in 2014 by Routledge Revivals ISBN 9780415643702 at £33.99 in paperback.