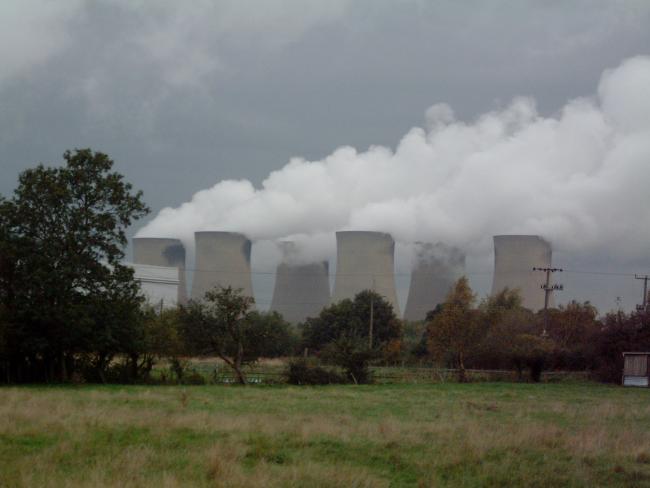 Drax power station. Coal fired generation is due to end as the government has withdrawn support for developing carbon capture and storage technology. Photo Workers.

The National Grid issued a statement on 10 May 2016 that for the first time since 1882 no electricity was generated by burning coal in Britain. This was hailed by the National Grid and energy market analysts as a great step forward in reducing pollution from coal. However, events the previous day reveal underlying contradictions. Britain’s energy supply is uncertain. Deliberately taking out one source of power is not a landmark to be celebrated; it is reckless.

On 9 May the National Grid had to issue a crisis call for additional generation, known as a “Notification of Inadequate System Margin” (NISM). The notice was issued due to a combination of failures in gas power stations and power import cables. The issue of a NISM means that if emergency generation cannot be brought online then there will be power cuts. The National Grid acknowledged that it paid 30 times more than the usual price per megawatt generated to keep the lights working that day.

'The gap between what we generate and what we use is now paper thin.'

It is over 8 years since a NISM was used in the summer months and the second time since November 2015. And in that event the National Grid had to pay industrial users to reduce demand and cut production. The reality is that the gap between what we generate and what we use is now paper thin. This has come about because of the contraction of coal generation and the failure to replace older generating capacity including nuclear power stations.

Capacity was off-line for maintenance and reduced demand was expected. But with the technical failures on 9 May, there was nowhere to go. The situation was made worse by lower than predicted wind generation. But even at the predicted level it would not have made up the shortfall according to National Grid figures. The Grid has not confirmed the source of the extra capacity bought in; it is reported to have been a gas-fired station.

The potential crisis in generation is exacerbated by government policy, EU policy, greed and a lack of planning. Government policy has been, following EU directives, to annihilate generation from coal by imposing the carbon tax on coal-fired power stations effectively makes them uneconomic. The physical closing of coal mines and the physical closing of power stations destroys powerful trade union forces too.

The government strategy of funding gas generation, wind farms and solar parks has renewed the license to print money they gave to the privatised electricity supply industry throughout the 1980s and 1990s. They hide behind cutting coal usage as a way of defending the environment. The justification for this stance falls away when you consider clean coal technology as a way of dealing with that problem in its entirety.

EU policy is to festoon Europe and Britain with wind farms. As the events of 9 May showed, that source can’t be relied on to underpin a guaranteed level of electricity generation. Greed in using gas generation for quick profits has depleted Britain’s own gas reserves. That has resulted in reliance on gas imports from the world’s most volatile and politically unstable regions.

There is no strategic planning for new future electricity generation. The problems with the planned nuclear station at Hinckley Point remain unresolved; if anything they are getting worse. New power stations do not pop up but take at least ten years to build and commission; every delay means an energy crisis gets nearer.

Workers must demand a unified energy strategy combining gas, nuclear, coal, and proven renewables with planned construction of new or renewed generation under public control. The establishment of clean coal technology, technology invented in Britain, technology which is exported world-wide but not installed in Britain, must play a part in this and will create a future for coal in Britain. We should look at “coal-free” 10 May as a prompt for action and not a cause for celebration.