EU migration shambles and the drive to war 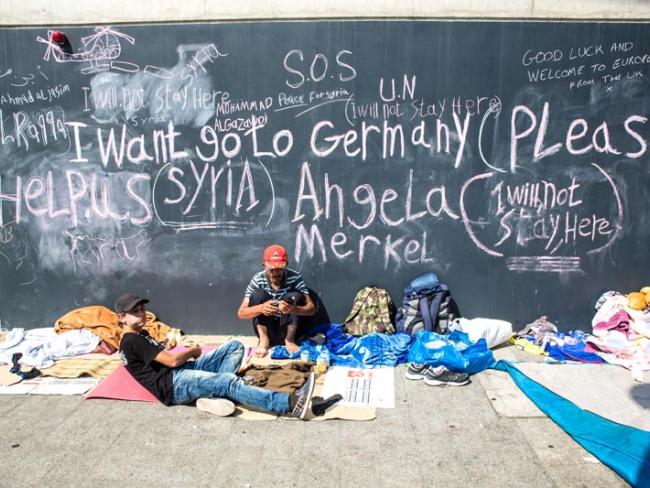 Looking for a home in Germany: Syrians in Budapest, 4 September. Photo Spectral Design.

What’s behind the misnamed “migrant crisis” and what does it say about the European Union? This is not something new. We have to look at how it started to understand what’s going on and what British workers should do.

Capitalism is waging war against workers worldwide to wreck countries and uproot their peoples. The NATO powers, especially Britain and the USA, instigated the “Arab spring” risings across the Middle East and North Africa. The NATO powers attacked Iraq and Libya as well as fuelling the war in Syria. The EU has backed all NATO’s wars of aggression. That’s the main reason for the huge number of migrants on the move.

The Syrian people have fought to save their country from US-instigated terror. President Assad refused to be overthrown by the US-backed mercenaries of ISIS (an organisation which grew out of the US/British invasion of Iraq). The NATO powers tried even harder to arm and train enough ISIS and al-Qaeda fighters to seize the country. This failed, so they are now threatening even more open intervention. Take NATO support away and Assad would end the war and defeat ISIS in weeks.

Some in Syria, instead of resisting NATO’s war of aggression, choose to flee to Europe. The EU, wedded as it is to the free movement of labour, encourages this and gives carte blanche to people smugglers. The impact of escapees from the Syrian war has been widespread, drawing in many people from other countries.

For some years prior to the 2011 bombing of Libya by NATO, Libya had agreed to prevent people smugglers ferrying African migrants from along the Libyan coast, to Italy and the EU. Those who reached Libya instead found work in Libya’s bustling economy. It was a win-win arrangement for the EU, the migrants and Libya.

NATO bombing of Libya put an end to that deal and created a failed state run by competing Islamic militias. The people smugglers are now back in business following the outbreak of the Syrian civil war in 2011, the emergence of ISIS and the 2014 Israeli bombing of Gaza.

The Islamists in Libya metamorphosed into Islamic State (ISIS). They saw they could make huge amounts of money from the people smuggling racket, which they joined and sometimes took over. Desperate Syrians, and Palestinian refugees from Gaza, were invited to join the African migrants in this human smuggling for substantial fees.

Most Syrian refugees were living outside their own country, in Lebanon, Jordan, Iraq and Turkey. Turkish and Afghan gangsters developed the routes from Turkey to Greece, and on to Germany. For 1,500 euros you could have a place in a small boat from Turkey to a Greek island. And 5,000 euros would get you smuggled from Greece to Germany, the favourite destination.

The same Afghan and Turkish smugglers then saw a new market. Bangladeshis and Pakistanis had been smuggled to Indonesia and Malaysia, after their attempts to get into Australia were blocked. After also being blocked by Malaysia, those smugglers decided to use their routes through Turkey to the EU instead.

One significant event has led to the recent spike in numbers smuggled. Germany is suffering from an acute labour shortage, a declining and an ageing population. It has a relatively low rate of unemployment. German capitalism desperately needed an influx of skilled, educated and young workers. Those factors would normally shift the balance of power from employers to workers, not something the German capitalists wanted.

Industry heads lobbied the German government and Chancellor Merkel herself, not only for more immigration but to drop legal constraints on setting those migrants to work as soon as possible. Eventually Merkel announced to the world that Germany would take 800,000 migrants, soon raised to 1 million. Finally Merkel announced that Germany would take in all Syrian refugees.

Why Syrians? Because the only Syrians who could afford to make that journey were those with money, currently living in Turkey and Lebanon. They were mainly young men, well educated and skilled. They were civil engineers, teachers, doctors, IT workers and so on. Some were promised university places to complete their studies.

Merkel’s stance was a green light for the smugglers; the floodgates opened. Pakistanis now pretended that they were Syrian, so did Iraqis and Afghans. As the columns of humanity moved through the Balkans, they were joined by Kosovans, Albanians, Serbs and Macedonians. Syrians became a minority in this population movement.

The migrants became live TV with film crews following them everywhere. When a group of migrants were being registered in Kos, one Greek woman was heard to shout at the Syrian young men “Why aren’t you fighting ISIS?” When some Syrians were asked why they were going to Germany, a few said it was because of ISIS or escaping the destruction. But most young men answered “For a new life”, meaning they had no intention of returning.

‘Hungary, trying to enforce border controls, was swept aside’

The Schengen Agreement abolished passport and other border controls within the EU, but it imposes controls on the EU outer border. At the end of August Hungary tried to enforce EU asylum regulations and Schengen outer border controls. It was swept aside, with Merkel shouting her encouragement to the migrants. The Schengen controls are in tatters because of Germany. Yet there were calls for Hungary to be “dealt with”.

Merkel then realised she had opened Pandora’s Box as there was no end in sight of this surge of humanity towards the EU. She called on all member states to show solidarity and accept a quota of migrants. When nearly half of EU countries quite rightly refused, a shaming campaign was launched to blackmail them. So much for EU solidarity!

Britain and the war

Cameron found himself on the receiving end of this shaming, which turned into a numbers game about which country would take the least or the most. Cameron was forced to announce that Britain would take 20,000 Syrian refugees over the course of the parliament, hoping the war would have ended by then.

Cameron also announced an RAF drone attack in Syria that took place last month, killing a couple of British jihadis. This vainly tried to give the impression that Britain was contributing to solving the problem at source. That’s what Chancellor Osborne had demanded, arguing that Britain must take on the “evil Assad”. The Defence Secretary, Michael Fallon, said the RAF strike was a “perfectly legal act of self defence”.

The British media, who usually struggle for a sensible story during the summer, have been at fever pitch. They have whipped up hatred, not against migrants but against all those who rightly oppose the EU dogma of the free movement of people. And the demonization of anyone who opposes an attack on Syria has begun.

The Independent ran a page about how to offer a spare room to a Syrian refugee, ending by saying that those offering were more likely to end up with an Eritrean or Pakistani! Another newspaper ran the banner headline “Drone strike kills Jihadi to save the Queen”.

Who is really trying to solve the problem at source? The answer is Russia. The Russian foreign minister has visited Saudi Arabia, Qatar, Egypt, Turkey, Jordan and Iran to try to assemble a military coalition against ISIS. And the Iranian foreign minister visited Saudi Arabia as part of this process. Syrian President Assad announced his government was happy to share power with the non-jihadist opposition and move towards new elections.

This was the basis for a broad anti-ISIS coalition that would include the Syrian Government and regional forces, exactly what was needed. Russia had made the simple truth clear to all those countries involved. If Assad falls, then ISIS will take over Syria and the refugee exodus would make the current “migration crisis” look trivial.

US air strikes against ISIS were having no effect as the US would not attack ISIS forces when they were attacking the Syrian Arab Army (SAA), which by now has lost an estimated 80,000 soldiers dead. The SAA has little chance of reinforcements because hundreds of thousands of young Syrian men of military age are being encouraged to head to Germany.

German capitalism is exploiting the Syrian civil war for its own benefit. It is taking the cream of Syrian professional workers who would eventually have been needed to rebuild Syria, as well as the young men and women of military age who should be fighting ISIS.

The rest of the EU is squabbling over numbers. Hungary is building a fence to keep out migrants beckoned by Merkel. Slovakia says it will accept only Christians. The EU Schengen agreement and free movement of labour principles have collapsed. Cameron lost a key vote in the UK parliament on the EU referendum rules, which will prevent the government campaigning for Britain to stay in the EU.

‘Support the Russian initiative for a regional coalition’

Meanwhile Germany and Merkel, who weeks earlier had ruthlessly condemned impoverished Greece to penury in the role of a German protectorate, are now hailed as unlikely heroes by the liberal elite. You couldn’t make it up!

What should Britain and British workers be doing in this shambles? Three things: