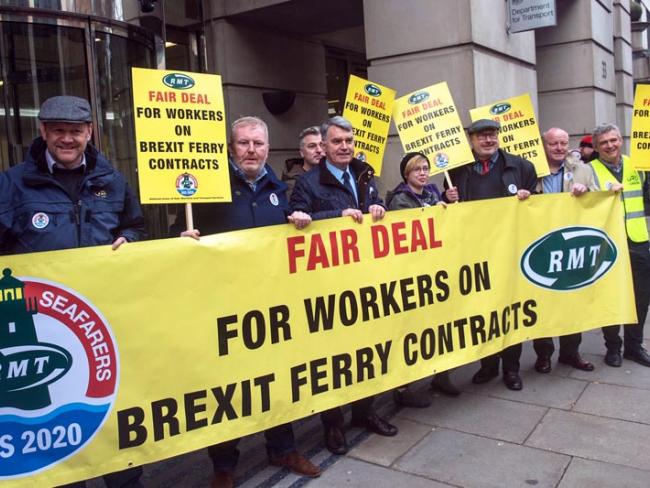 11 January 2019: Members of the RMT demonstrate outside the Department for Transport in Westminster. The union is fighting for UK employment on Brexit ferries. Photo courtesy RMT.

The RMT was prominent in reacting to the farcical award of a contract for ferry services to Seaborne Freight, a company with no ships. It is said to have copied its contractual terms and conditions from the back of a pizza restaurant’s menu!

The government wanted ferry services as a contingency to keep cross-Channel traffic moving after Brexit. This Grayling-inspired move went down badly not only with RMT but also with existing ferry operators, port authorities, and Eurotunnel.

The union organised a series of high-profile demonstrations in protest at the contract announcement. RMT rightly called for any Brexit ferry contracts to be fulfilled using ships crewed by British seafarers, on decent pay and conditions negotiated through recognised trade unions.

The contract was later cancelled. General Secretary Mick Cash said: “…the news…comes as no surprise to us at all. The whole exercise is a complete and utter shambles with the government ignoring union calls on what needs to happen. Instead ‎they are blundering on from crisis to crisis.

“This Government ‘wing and a prayer’ approach was always doomed‎ to failure and it's time for Chris Grayling to stop attacking RMT and start listening to people who actually know what they are talking about instead of the chancers selling him a pile of old rope they don’t even own.”

• Related article: Public transport - no future without a fight