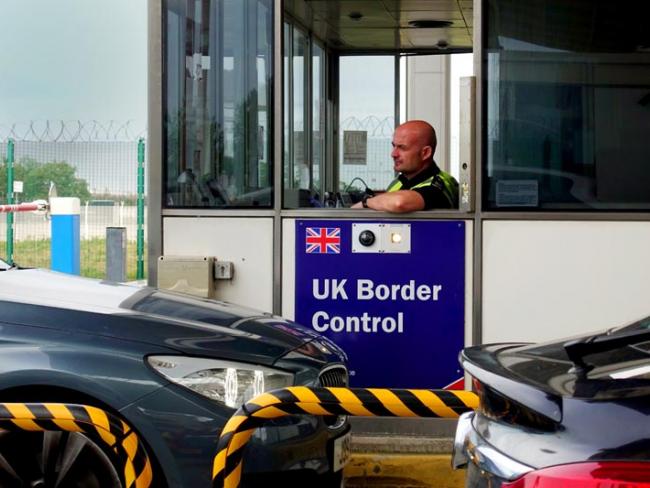 Listen to Home Secretary Priti Patel and other ministers and you might get the idea that the government is cracking down on all immigration, legal and illegal. But cheap labour is still being encouraged into Britain…

The Covid-19 pandemic has saved the government a few blushes, and not least on immigration. Global travel crackdowns have choked off the legal routes of entry into Britain, both for work and for study.

For now, migration into Britain is necessarily low. Only after the pandemic will we see what becomes of government promises over immigration in its 2019 election manifesto. But the signs are bad.

And the main reason for pessimism can be found in the manifesto itself. It is littered with a phrase that has come to symbolise government doublespeak on migration: “the brightest and the best”.

Almost unnoticed, the government signed a trade deal with India in February – not a full-blown free trade deal, more a step along the way to one. It called the deal an “enhanced trade partnership”, and trumpeted it in a press release whose title focused on an alleged 1,500 jobs coming to Britain via Indian conglomerate Tata.

But the agreement was noticed by Personnel Today, a professional magazine that understands what’s going on. In a revealing article, it said the deal, when combined with the effects of the points-based immigration system announced in January, could see the numbers of migrant workers entering Britain rise.

Immigration solicitor Yash Dubal, quoted in the article, said, “When you analyse the details of the new system it is apparent that certain measures have been put in place to encourage more people to come here, rather than to deter them – which is the message the government would rather people believe.”

Dubal said the government had been “rather clever, because those who want less immigration have had their attention diverted with talk of tough new rules”. The reality, he said, is a far more open regime that favours foreign workers.

One of the key changes is the abolition of the so-called resident labour market test. Before then, employers looking to bring in labour on a general visa, known as Tier 2, had to prove that the job could not be filled by someone in Britain by advertising it for 28 days in a specific way.

During the 2016 referendum campaign there was much talk of stopping the scandal of some jobs in Britain only being advertised in Poland. But instead of insisting on all vacancies being advertised here before being touted abroad, the government has simply removed any requirement to advertise, including for migrant workers from outside the EU. This is what it means by fairness and equality of opportunity.

The January changes also included lowering the minimum salary for a skilled migrant – now defined as equipped with an equivalent of A-levels rather than, as previously, with a degree – from £30,000 to £25,600. Also scrapped is the annual limit on visas for skilled workers (it was 20,700).

There’s a proviso that migrant workers on a skilled workers visa must be paid at least the going rate. But there is also an exception for designated shortage occupations (and there are a lot of those) where they can be paid up to 20 per cent below the going rate.

To make migration even more attractive, the six-year limit on the visa has been scrapped: it is now indefinite, with the potential to acquire permanent permission to stay after five years.

It’s almost as if the government has asked how to design a system to maximise immigration while giving the impression of control, and come up with the answer.

Meanwhile, it has pressed ahead with a pilot scheme to attract seasonal farmworkers to Britain. The idea of legislating for decent wages and conditions for work on British farms obviously escapes it.

The scheme started in 2019 with 5,000 visas. In December 2020 it was expanded to 30,000 visas, and includes workers from Russia, Ukraine and Belarus. It has seen ruthless exploitation, documented by the Financial Times in March, of workers picking fruit in Scotland destined for the likes of Tesco and Marks and Spencer.

Not to mention the government’s invitation to 5 million people in Hong Kong to settle in Britain, something that Home Secretary Priti Patel helpfully reminded us of when introducing the new policy on illegal immigration.

That new policy, announced on 24 March this year, is full of fine words about taking back control, firmness and fairness. But it’s hard to take any of it seriously, given that – as the National Audit Office revealed last year – the government has no idea how many illegal immigrants there are in Britain, and has not had an up-to-date estimate since 2005. (Nor has it said it is working on new numbers.)

The absence of numbers is a blessing for the government, since there is no baseline against which the success of its policy can be judged. Where it does have estimates, it can come badly unstuck, as over the number of citizens of EU states seeking permanent residence in Britain.

“Those who want less immigration have had their attention diverted with talk of tough new rules.”

When Teresa May negotiated the first version of the Withdrawal Agreement from the EU, the official estimates were that there were around 3 million citizens of EU states living here. Fast forward to the end of March this year, and no fewer than 5.3 million of them had applied to the settlement scheme. And the deadline for registering is not until the end of June!

The Conservative manifesto talked about an overall lowering of migration, taking into account the notion of fewer low-income migrants coming. The last official figures on migration before the pandemic hit tell a rather different story.

Net migration for the year to March 2020 was around 310,000, according to the Office for National Statistics – treble the number in 2013. And using new, more accurate methodology the ONS now reckons that EU immigration in the nine years ending in March 2020 averaged 213,000 a year, up from previous estimates of an average of 123,000.

The overall figure for the year to this March is the highest for four years – despite a big fall in recorded numbers of immigrants coming from the EU. That’s the reality behind the slogan “Global Britain”: employers in our country, and successive governments, will go to the ends of the earth to recruit workers. And bend over backwards to get them in.

Workers has documented the effect of this policy on the nations that have allowed, or even encouraged, their skilled workers to be sucked in by British employers. These include Romania, where swathes of the population have been stripped of access to doctors and dentists, and many African countries, looted of their medical staff.

But there’s another, equally corrosive, effect of this worldwide hunt for talent: the deliberate neglect of the wells of talent that exist in this country. You only have to look at the government’s own 2018 report into outcomes for children eligible for free school meals to see the neglect and waste of talent caused by failure to deal with the effects of poverty.

How many Cricks or Hodgkins might there be in Britain if we had a system designed to maximise the talent of all our young people? As it is, notes the report, 18 per cent of those leaving school in 2018 at age 18 did so without reaching the standard of 5 or more A*-C GCSEs or equivalent. Around 40 per cent leave with fewer than 2 A-levels.

The neglect extends into all areas of education and training. After all, why bother to spend money developing talent in Britain when it’s freely available abroad? So the price for Global Britain is being paid not just by other countries but by working class families in this country whose children are denied the opportunities they deserve.

Over the past decade wages and productivity have stagnated, and spending on further and adult education has slumped. And from 2010 to 2019 net migration exceeded the government’s “target” of 100,000 a year in every year – 2012 was the last year it was even below 200,000.

Only the wilfully blind could fail to join the dots here. There is a structural failing at the heart of the problem. And it’s called capitalism.

Migration: record inflow
Employers – no interest but their own [Updated]
Abattoirs under attack
Who’s counting? Not the government
The ‘left’: fear and loathing of workers