The hidden price of online shopping 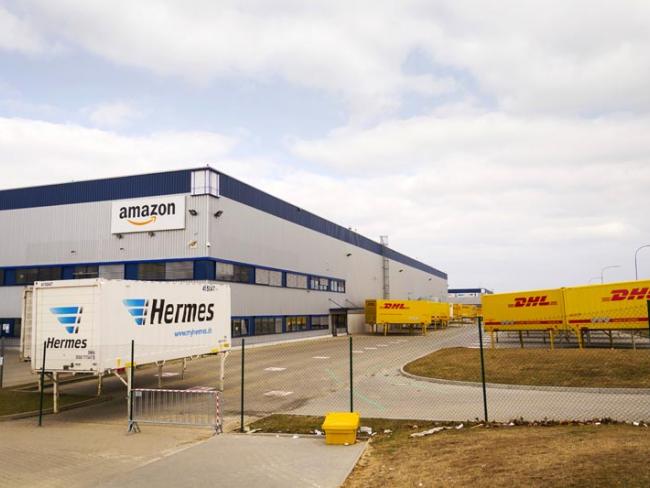 It could be anywhere in Europe (this depot is in the Czech Republic): shipping containers outside an Amazon depot. But at what price? Photo josefkubes/shutterstock.com

While the online shopping giants get spectacularly rich, the workers who deliver to your home face zero hours contracts and long hours for minimal pay. Workers has been investigating the hidden world of the couriers…

Most of us are not strangers to shopping online, in fact as of last year the majority of us (51 per cent) do most of our shopping online – this is according to an annual survey carried out by ComScore. Yet many of us do so without even thinking about the working conditions of those whose job it is to ensure we receive our online purchases.

The UK’s largest delivery giant is Hermes Group. It has recently hit the headlines as it has emerged that some staff are not paid even the minimum wage. Hermes Group indirectly employs around 10,000 couriers in Britain alone – not bad for a German-based company. These couriers deliver to our homes 200 million parcels every year for well known companies such as Next Directory, eBay, ASOS, John Lewis and Topshop.

Yet its 10,000 couriers in Britain are not technically employed by the giant. They are in fact self-employed.

Hermes Group has depots based all over the UK, with each one covering an area divided into what’s known as a ‘round’. Rounds are within the area that the depot covers, with each one allocated to a courier. Every morning the couriers have to go to the depot to collect their parcels for the day for the round they cover. This takes them on average an hour and a half every morning.

Although paid their wages by Hermes Group they have to declare their own tax. The couriers use their own vehicles and pay their own parking and petrol. Of course they are able to “claim” this back when completing their annual tax returns but they have to have the money upfront. Given that the couriers are paid an average of 55p to 65p per parcel, financing their work upfront can cause them financial strain.

In some cases couriers have managed to negotiate 75p per parcel if they have what they class as a difficult round – one with no parking, where the likelihood of getting a parking ticket is quite high. There is of course couriers are not guarantee to receive a worthwhile number of parcels each day. It can be anything between 30 and 100, depending on the area or round.

It takes a courier, assuming a trouble-free round with no parking issues, customers at home etc, approximately 20 minutes to deliver 5 parcels. At the end of the working day they are unable to take undelivered parcels back to the depots as they are closed, so they have to store them in their own homes until the next morning.

Hermes Group managers argue that a courier can deliver 100 parcels in 3 hours and at 55p per parcel – that’s £18 per hour. But they conveniently don’t deduct the cost of petrol or parking and they also don’t take into account that most areas where couriers work have little or no parking.

Some couriers report they have to pay to park in a local shopping centre and then carry on foot as many parcels as they can manage. This might mean a 15-minute walk and several trips before the deliveries are completed. The management also don’t take into account the hour-and-a-half needed every morning to sort through the parcels.

As the 10,000 couriers are self-employed they are entitled to zero annual leave and zero sick pay. They are expected to work from Monday to Saturday each week, and every other Sunday. Most depots expect couriers to work Bank Holidays for no extra pay.

Only in depots where couriers have stuck together and refused to do this have Bank Holidays been classified as non working days. If staff wish to have a day off or are sick or want to take a holiday they are responsible for getting another courier to cover their round. If they fail to do so rounds are given to someone else and they then become unemployed.

‘If the “self-employed” staff want a day off, they are expected to find their own cover.’

Couriers based in an East London depot told Workers that while pay is an issue they are more concerned that they are not able to take leave of any kind.

One woman said that her 7-year-old daughter was struck down with norovirus and unable to attend school. With no friends or family to help she contacted the depot manager to explain that she had to take the day off but would do double the work the following day. She was told that wasn’t acceptable: she would need to bring her daughter to work – or her round would be given to someone else permanently.

In another case in the same depot a courier who has worked for Hermes Group for 9 years with never a day off attended the birth of her granddaughter – only to return to work to find her round had been given away. Then a week later she was contacted and asked to come back because they hadn’t been able to find anyone else to take on the round permanently.

It’s not just Hermes Group that treats its staff badly. Other well known delivery giants are in on it too. DPD, also German-based, ships around 2 million parcels a day for the same kind of companies served by Hermes Group. It supplies some workers with company vehicles – but staff are expected to pay £500 per month to hire them. Some staff at DPD are employed and others self-employed, as with Hermes couriers.

No time for breaks

DPD staff are expected to work 5 days a week with weekends optional. Sounds good? Well, the hours are Monday to Friday 8am till 8pm, with most drivers unable to find the time to take breaks during the day. A driver based in an Essex depot reported that he has to walk around delivering parcels during what should be his break in order to finish the deliveries, and this isn’t a one-off : it’s an everyday occurrence.

If the “self-employed” DPD staff want a day off they, like Hermes Group staff are expected to find their own cover. For each day they can’t do this they are fined £150. DPD also make all staff attend compulsory training, for which they charge them £25.

We live in an era where apparently we should be grateful for having a job. It seems that job security and decent working conditions have become a luxury. A report into Hermes Group, published in September 2016 and led by Labour MP Frank Field, found that staff are illegally classed as self-employed. The campaign against Hermes Group is being led by the GMB union, following an investigation by the Guardian.

The possible legal proceedings come after a similar claim was brought successfully against app-based taxi company Uber. Employment judges ruled that self-employed drivers should be classed as workers and therefore have the right to the national living wage, paid holiday and sick pay. Uber is appealing. The Hermes case is understood to be at an early stage and a claim has yet to be formally lodged with the tribunal.

At the end of March the GMB launched legal proceedings against delivery firm UK Express, which is used by Amazon. In the same week, Amazon founder Jeff Bezos became the world’s second richest man after the company’s shares rose.