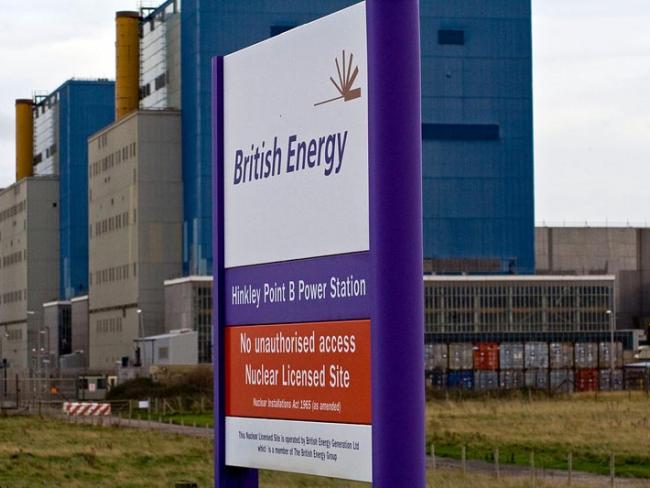 The existing Hinkley B station (with Hinkley A in the background). Photo Mark Robinson (CC-BY-SA 2.0)

The government is to review the Hinkley C nuclear plant deal with France and China. The project is beset with problems, not least that the European Pressurised Reactor is as yet unproven technology. There are no working examples anywhere. Olkiluoto in Finland and Flamanville in France have yet to make their debut, and both are plagued by construction delays and costs currently triple original estimates.

The costs are astronomical. If the contract is agreed, British taxpayers, through subsidised loans and guaranteed prices, will pay double the £18 billion construction costs, with electricity generation not expected before 2025 at the earliest.

Even at that cost, the plant would not be in British hands. Thanks to successive governments abdicating responsibility for energy, and supervising the decommissioning of our nuclear industry, Hinkley C is set to be two-thirds French and one-third Chinese owned, courtesy of EDF and CGN, both state-owned companies.

David Cameron’s government was keen to rush the deal through, citing lack of capacity. EDF, hit by falling power prices, was desperate to get a toehold in Britain, where current nuclear facilities are all close to expiry. China, with a stranglehold on steel production, didn’t need a second invitation to join the party.

But what of British interests? The TUC’s Frances O’Grady is urging a green light at all costs, citing the thousands of jobs at stake, perhaps 25,000 in total, of which 5,600 in direct construction and 900 to maintain the site after completion. But how many will be British jobs? Are we talking about British steelworkers and British engineers, or more likely, delivering American fast food to French construction workers in Somerset.

With this review, the government has an opportunity to re-examine and reinvest in an independent energy policy, based on new and fast-evolving technology. Part nuclear, part gas and fossil fuel, part renewable, but all British.