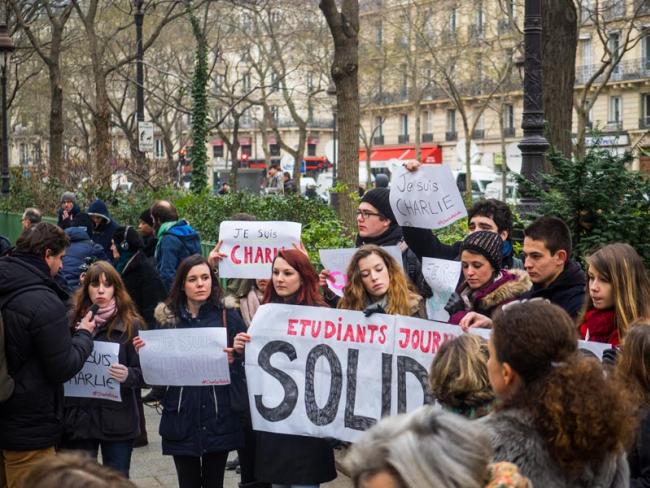 The French people have responded magnificently to the fascists who killed the workers at the French satirical magazine Charlie Hebdo in Paris on 7 January and in a Parisian grocery shop on 9 January . All over France, as in other cities across the world, people demonstrated their identification with the murdered workers.

In the three days after the office murders hundreds of thousands stood in vigil holding up pencils, a symbol of thought and communication, in repudiation of the barbaric attempt to suppress these characteristics of civilised humanity. On Sunday 11 January, a vast crowd of up to 1 million demonstrated in Paris against the killers and others like them.

‘Terrorists hate workers, because it is at work that ideas develop and progress.’

Terrorists hate workers, because it is at work that ideas develop and progress, where people express their essential human characteristic of doing and making. It was significant that the murderers chose to kill workers at their places of work, while they sat and discussed together in their weekly editorial meeting, and while they went about their daily lives shopping for food.

An echo of London

The assaults were an echo of the London bombings on 7 July 2005, which targeted Londoners travelling to work. The French terrorists were French-born, just as the London bombers were British.

The new edition of Charlie Hebdo is to be published as usual. But this time, as a response to the terrorists’ attempt to silence opposition, one million copies will be printed, instead of the usual 60,000, with the costs given by many bodies, including other publications and the French government.

Here in Britain the response has not been so clear. In contrast to French courage and refusal to be intimidated, some national newspaper editors have openly admitted to self-censorship. The BBC’s shameful editorial guidelines about the avoidance of “causing offence” stated that, “The Prophet Mohammed must not be represented in any shape or form.” Popular outrage caused the guidance to vanish from the BBC website on 9 January.

As with the horrifying murders of 145 children and teachers in a school in Pakistan on 16 December, and the 6-day killing spree by fundamentalist terrorists in northern Nigeria in early January – with maybe 2,000 killed – it is clear that there is hatred of progress to be fought and defeated in the world.