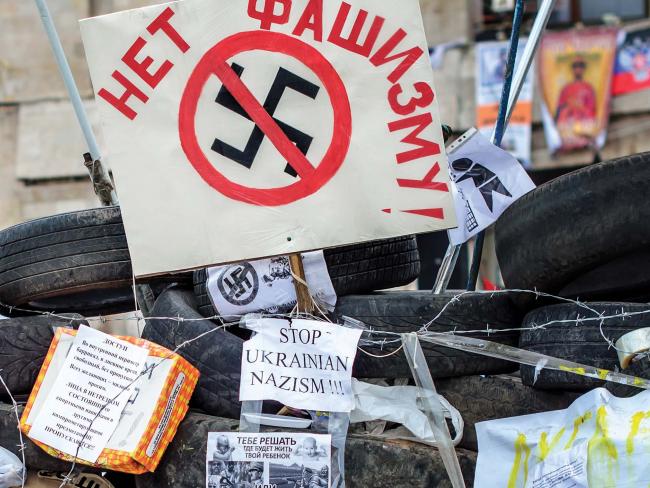 Anti-fascist posters on a blockade set up in Donetsk, eastern Ukraine, April 2014. Many of the posters would now be illegal. Photo verOnika/shutterstock.com.

Seventy years after the defeat of Nazism in the Second World War, history is being rewritten and descendants – literally – of the treacherous Ukrainian fascists are in power and seeking revenge. And while the eyes of the world were largely elsewhere, at the end of May Ukrainian President Petro Poroshenko signed into law a raft of legislation that glorifies anti-Semitic fascists and criminalises anyone who defends the achievements of the Soviet Union and the Red Army.

One law threatens those who deny “the criminal character of the communist totalitarian regime of 1917-1991 in Ukraine” with criminal prosecution. Carrying or displaying a hammer and sickle flag will now be treated as equivalent to waving a Nazi swastika.

Among the package of laws is one that defines the infamous Nazi collaborators of the Organization of Ukrainian Nationalists (OUN) and its military wing the Ukrainian Insurgent Army (UPA) as “fighters for Ukrainian independence”.

The Nazis let the OUN leaders Stepan Bandera and Roman Shukhevich out of prison in 1944 and 1943 respectively and enlisted them to fight against the Red Army. If the OUN and the UPA had really been fighting against the Nazis, Bandera and Shukhevich would have been shot, not released.

The law whitewashing the fascist military organisation UPA was drafted by its leader’s son.

Shukhevich was a notorious anti-Semite. The law whitewashing the UPA was drafted by his son, Yuri Shukhevich.

During the war, the OUN and the UPA were responsible for the massacre of about 100,000 Poles in Volhynia and Eastern Galicia, and for the Khatyn mass murder in Belarus. They were also actively involved in the Nazi massacres of Jews and others. They were Nazi collaborators and fascist murderers.

After the Second World War the US government allowed these Ukrainian fascists to flee to the USA, Canada and elsewhere. The CIA funded Ukrainian Nationalist research groups, newspapers, and of course spies. When the Soviet Union broke up in 1991, these Ukrainians flooded back to Ukraine.

By painting Nazi collaborators as heroes and the Red Army and the Soviet Union as villains, the Ukrainian parliament is trying to reverse the result of the Second World War. By denying the historic importance of the Soviet Union’s victory over Nazi Germany, they are targeting today’s Russia.

In line with this trend, Poroshenko’s speech in Kiev in May on the 70th anniversary of VE Day referred to numerous victims of the Nazis without mentioning Jews once. And that in a city on whose outskirts lies Babi Yar, the notorious ravine where 33,771 Jews were massacred by the SS – backed up by local police – in two days in September 1941.