Skip to main content
Home » News/Views » No to the break-up of Britain!

No to the break-up of Britain! 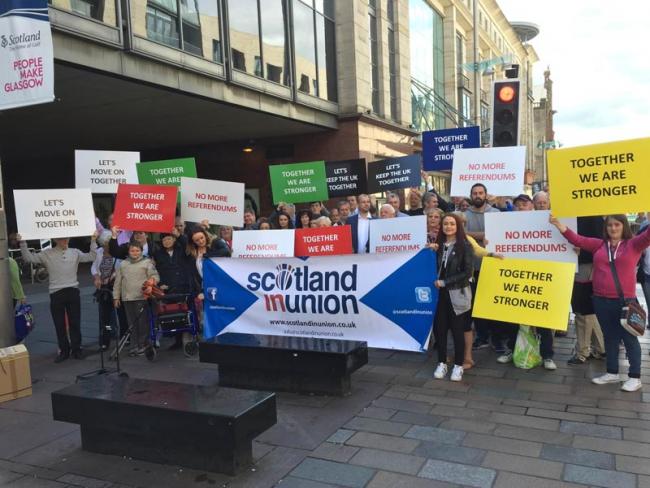 Two days after the referendum, Glasgow: asserting the unity of Britain. Photo Scotland in Union.

The SNP and the Yes campaign supporters have been the cheerleaders for EU membership and the concept of “Scotland in the EU”. Yet working class unity across Britain is essential to our future…

When over 72 per cent of the British electorate turned out in the EU referendum – a higher figure than in the last five general elections – it was clear they were voting as a British voice. Regions, sections or “nations” were not determining their own futures in or out of the European Union. It was a vote for Britain as a whole with a result that applied to Britain as a whole.

The path to this clear democracy had already been established in 2014 with victory for the rejection of Scottish independence in the referendum by nearly 11 percentage points. That decision reaffirmed that we are one nation from the Scilly Isles to the Shetland Isles.

Such worker unity is essential if we are to defend ourselves against the capitalist club that is the EU, with its free flows of capital and labour, anti-worker judgements in the European Courts of Justice and attacks on sovereignty. The class that forged the nation voted as a nation to reject the EU.

The SNP and the “Yes” campaign fought and lost their attempt to break up Britain in September 2014. In desperation to recoup their losses, they denounce class unity and the integrity of Britain as a nation. They do not accept the majority British decision to leave the EU and seek to rerun that vote as well as the one in which they were roundly defeated in 2014.

Unfortunately for them the first rerun idea is a busted flush. As for a second independence referendum, polling ever since the month after they lost points to a steady majority in Scotland against holding one. The only successful “declaration of independence” has come from the British electorate as a whole voting to leave the European Union. The whole British electorate, the working class as a whole, should have a say if anyone wants to dismember their nation.

‘In February the EU itself acted as a cheerleader for the SNP government.’

Who would want the EU's free movement of labour and capital anyway? The SNP and the “Yes” campaign supporters have been the cheerleaders for EU membership and the concept of “Scotland in the EU” – even though many of them, often trade union members, also campaign against impoverishment, zero-hours contracts, restrictions on collective bargaining and the privatisation of our national assets.

The EU and its directives have been the source of these miseries and depredations for decades. In February the EU itself acted as cheerleader for the SNP government, interfering in the internal affairs of Britain by directly offering them a separate deal to remain in the EU despite Brexit.

The Friends of Europe report (the name speaks for itself!) to the European Parliament’s Committee on Constitutional Affairs urged EU institutions that they “should be prepared to deal with Scotland”. It demands a different approach to Scotland saying “there are discussions in those territories (Scotland, Northern Ireland and Gibraltar) regarding the possibility of obtaining differentiated status as compared to the rest of the UK in the withdrawal process. This would point to a possible differentiated application of EU law. Moreover, there is a call from some sectors of those territories to listen and accommodate the will of the majority of citizens of those territories to remain in the EU.”

Focusing on Scotland, the report points to “the different position of that devolved territory and of the UK Government regarding the participation in the single market as well as their approach to the free movement of citizens.” It insisted: “The questions on whether differentiations could be envisaged in the current constitutional and institutional set up of the Union should thus be addressed”. If this is not interference in the internal affairs of a sovereign nation, what is?

To its discredit, the Labour Party chimes in with support for the EU's free movement of labour as an essential companion to the free movement of capital – and voted with the SNP in the Scottish parliament against the triggering of Article 50. Only three of their MSPs voted for it – Neil Findlay, Richard Leonard and Elaine Smith.

There has been no let-up in the volume of good reasons why the dismemberment of Britain should be opposed, particularly by organised workers. The important point is that capitalism wants to break up the potential great strength of a united British working class because in the struggle against capitalism class unity is essential.

‘The separatists can only be seen as backward looking and destructive’

The euro has failed the peoples of Greece, Portugal, Spain and France – why would we tolerate it in Britain? Equally intolerable would be to have as the Scottish central bank one that the British taxpayer is still bailing out or one that brings in overbearing US financial interests.

The break-up of nations is dangerous. Just look at the EU-inspired disintegration of Yugoslavia. The era of rich pickings from North Sea oil and gas is over; Scotland could not survive alone economically without subsidy from the Bank of England.

This economic debility is already coming home to roost for the SNP. Small businesses are in revolt against the Scottish government's attempt to replenish its coffers by hiking business rates. Even the flagship international football ground, Hampden Park, is threatened with closure by this hike. Pubs, restaurants and hotels, for example, face business rates rises of up to 400 per cent in the first revaluation since 2010.

For organised workers there is dismay at the steady rise in unemployment. In February a rise of 6,000 in the jobless total has taken the unemployment figure in Scotland to 135,000 while across Britain the figure fell by 7,000. The trade deficit in Scotland is now over £3 billion.

Severe cuts to council funding are cited by cities in Scotland as reasons for raising council tax by 3 per cent. £53 million worth of cuts have now been announced in Glasgow. The city's share of local government funding has decreased annually during the years of SNP government.

In contrast, significant sectors of Scotland’s economy have benefited from a “Brexit bounce”. A Business Trends report by consultants BDO found optimism among manufacturers at a 20-month high and at a 14 month peak in the service sector. BDO’s head in Scotland, Martin Gill, added that the post Brexit circumstances “have provided a much-needed short-term boost for our economy, particularly our manufacturers”.

There is guarded optimism in agriculture and fishing too. In January the conference of the Scottish Agricultural Organisation Society urged the industry to start preparing now for the major changes that will happen when Britain fully exits the EU. The chief executive of the Scottish Fishermen's Federation, Bertie Armstrong, wrote an article in The Scotsman headlined “Fishermen must dive in and grab opportunity that Brexit presents”. He emphasised “that with Brexit now looming, we have a once in a lifetime opportunity to regain control of our fisheries and our 200-mile Exclusive Economic Zone . For fishing and its associated industries, there is no doubt that these opportunities are immense. Indeed, this sea of opportunity is one that will domino down to everyone in the UK by putting our waters back under our own control.”

With such hands-on and active creators of our post Brexit, independent Britain urging us on, the separatists can only be seen as backward looking and destructive – of both our national working class and our national unity.