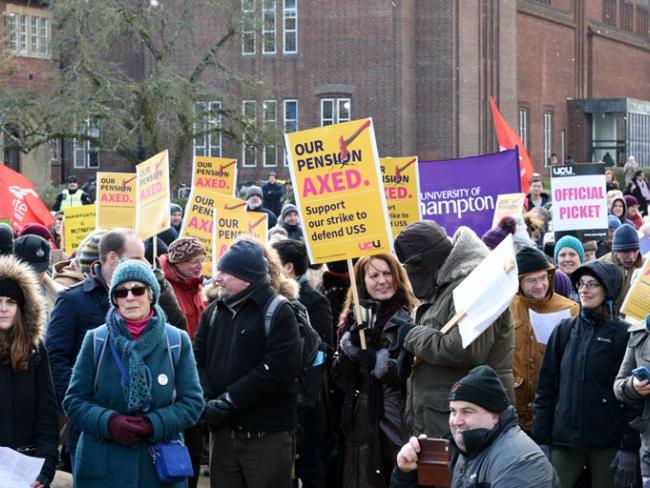 University managements are currently circulating a pension proposal to university workers for consultation based on fundamentally flawed assumptions about the economy and interest rates. Unions in higher education are right to be sceptical – the University and College Union calls the timing “unfortunate” in a circular to members on 7 September and says the assumptions are “flawed”.

They need to go further and call for the dumping of the entire EU costings methodology which is driving this attack on pensions and led tens of thousands of university workers to strike earlier this year to keep the Universities Superannuation Scheme (USS) open. UCU members should not lose sight of the fact that the strike was essentially about the 2017 USS pensions’ actuarial review, and dismiss any calls for higher contributions.

The 2017 review produced a theoretical, fictional deficit in the USS fund and was based on current super-low interest rates. That fiction rested on the assertion that 2017’s all-time low interest rates were here to stay. And it’s the view reinforced by the Pensions Regulator, which in turn is overseen by the European Insurance & Occupational Pensions Authority (EIOPA).

But these low interest rates will not persist even over the medium term, at which point the USS deficit will begin to fall. In fact, rates are already rising in the US, driven by higher inflation and tighter monetary policy. The inexorable movement towards higher rates was also something that the Bank of England took into account when it decided to increase rates here in Britain during August.

‘The USS scheme is fundamentally healthy. Yet the proposal now being circulated is still based on the assumption that interest rates will stay the same indefinitely.’

The USS scheme is fundamentally healthy. Yet the pension proposal now being circulated to university workers is still based on the assumption that interest rates will stay the same indefinitely. That’s why the Pension Regulator and the EIOPA still insist that the “deficit” should be resolved by universities and university workers paying higher contributions into the USS.

In reality, with the interest rate cycle trending higher in the medium term and the beneficial impact this will have on the deficit, there is no need for either the employer or USS members to increasetheir current regular payments.

Although more polite in their analysis Mervyn King (ex- Bank of England Governor) and John Kay  (an economist) have just written an article on USS pensions in Times Higher Education (6 September 2018) saying more or less the same thing.

In their well-mannered way they undermine the EIOPA falsehood without making reference to it with comments such as “…and the irony is that the realisation of the costs behaving in this way has inevitably led to the trustees to propose closing the Scheme altogether”.

UCU members should respond to the consultation by insisting that the EU-inspired pension falsehood delivered by EIOPA is dumped and that university management should stop pretending the sky is going to fall in on USS pensions without a hike in contributions.

Members of other unions who have suffered the closure of final salary schemes at their place of work should take note of the EU’s pensions’ costing methodology, introduced in liaison with Blair in 2000. That methodology has been catastrophic.

King and Kay spell out just how damaging it has been: “Regulation to protect pensioners in the event of closure has resulted in the closure of virtually all Schemes.”

Like Blair the EU is a cunning enemy. Unions who fell for the same EIOPA pension trick currently being played on UCU, and who insist in the delusion that the EU is a benign friend, should take note.

The dark hand of the EU
Strong support in Glasgow for university pay and pensions fight
University workers start strike action
Pensions: thanks to the EU, it's not all over yet
Truce in uni pensions fight