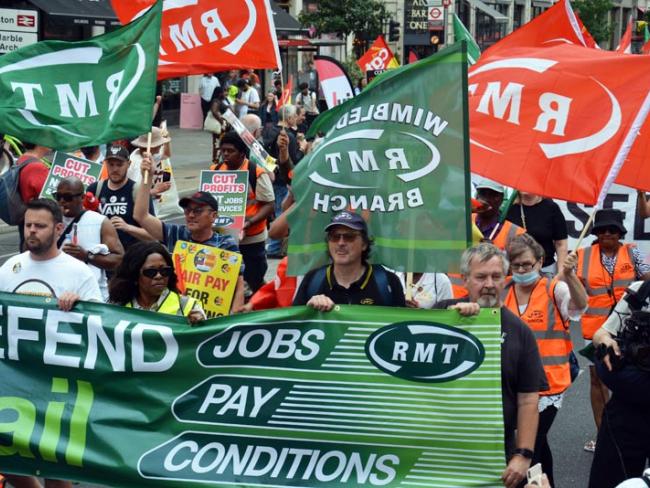 There is surely now no doubt about the government’s hatred of public transport and the highly unionised workers that provide Britain’s train, bus and tram services…

Boris Johnson and his transport secretary Grant Shapps are now engaged in naked class warfare against transport workers. They are exploiting every opportunity presented by the Covid-19 pandemic to axe existing services and to cut back on previous railway investment commitments, including HS2.

Shapps in particular has shown himself to lack knowledge and understanding about how railways work, manifested in unworkable policies adopted by the government. His disregard for safety was graphically shown when he criticised the industry for cancelling trains in the face of serious storms – and by his suggestion that agency staff could safely replace trained, experienced workers on strike.

Thousands of rail workers, including maintenance workers, now face the prospect of being thrown on the scrap heap. Government-directed slashing of maintenance and renewals investment along with fewer maintenance staff will lead to lower safety standards. And fewer station and ticket office staff will degrade service standards for passengers.

Johnson has previously talked in terms of better and more environmentally friendly buses, reducing car usage, levelling up, and improving the quality of life for millions. These are no more than sound bites, forgotten once uttered.

Johnson and Shapps are in reality overseeing wholesale cutbacks in bus and rail services and encouraging greater car use. By seeking to deny rail and bus workers’ pay increases at a time of rampant inflation – now over 11 per cent – while tax revenues and profits soar, they are openly and deliberately making the rich even richer while dramatically reducing the buying power of workers’ wages, ensuring a big reduction in their quality of life.

RMT rail members have responded by voting overwhelmingly for strikes across most of the national rail network and on London Underground. White collar union TSSA has now begun balloting its rail members. Train drivers in Aslef are also being balloted, and some have already voted to strike.

Unite also looks set to ballot its rail members. It has already campaigned to raise wage levels among poorly paid bus drivers, winning some important victories along the way. Bus drivers employed by Arriva in West Yorkshire are currently out on indefinite strike in pursuit of better pay.

Much has been made of the downturn in rail passengers as a result of the Covid-19 pandemic. Yes, commuter traffic and business travel have been much slower to recover than leisure travel. And before the pandemic, rail companies (and the government) relied on these passengers for much of the industry’s revenue.

But now both commuter and business travel are growing. The government’s own rail company LNER which runs inter-city services on the East Coast Main Line is forecasting business travel will reach 80 per cent of pre-pandemic levels by 2027.

What will happen with commuter numbers now? The signs are that office workers who were working from home during the pandemic are now going into offices. even if not for five days a week. In London, tube passenger numbers are up to 87 per cent of pre-pandemic levels.

Rail services were dramatically reduced during the pandemic; they are still down at around 85 per cent of pre-pandemic levels. This has resulted in overcrowding at peak times, especially outside the London area.

It is hard to ignore the continued growth of road traffic, along with the attendant problems of congestion and pollution. Traffic is now at around 10 per cent higher than pre-pandemic levels.

Some took to cars as an alternative to public transport to protect themselves from infection, and are still not confident about mixing with people in confined spaces. That’s understandable given the crowding on reduced rail and bus services. Bus services have been cut by a quarter in the past decade.

Commuters are less likely now to accept the overcrowding they regularly experienced on pre-covid commuter trains and buses. Many are already calling for the government to use the pandemic as an opportunity to permanently improve the lot of public transport users.

Many motorists faced with rapidly increasing fuel prices will see public transport as a better option for them, despite rail fares rising by nearly 4 per cent. The rise was criticised by many who said that it was not going to help to get people back on trains, and was contrasted unfavourably with the subsidies given to motorists.

Unlike our own government’s treatment of public transport, the German government has subsidised fares for the summer to help ease the burden of fuel prices and to get more people back on trains, trams and buses. The offer is unlimited travel on public transport (except inter-city trains) for €9 a month (about £7.70).

If not now, when?

Noting that the rail industry is recovering from the effects of the pandemic, rail minister Wendy Morton recently told a rail industry conference – “now is not the time to take industrial action”. This of course poses the question “if not now, then when?”

Most rail staff would need a pay rise of around 15 per cent to restore the buying power of their salaries to that of 2019. The government and media continually paint a picture of all rail staff as well paid or overpaid. They mention only train drivers despite the fact that most of these highly skilled workers are Aslef members rather than RMT or TSSA, and they have mostly not yet balloted for action on pay.

Thousands of rail workers are paid much lower salaries than drivers. TSSA highlighted the salaries of some of those working for publicly-owned LNER, who are paid an annual salary of £18,805, just above the minimum wage of £18,278. Their salary is so low that they had to be taken out of the pension salary sacrifice scheme to stay above the minimum wage when that increased.

Many station staff, vital to the safe and secure operation of passenger services, are on salaries of around £24,000. In contrast, rail bosses are on some of the highest pay packets in the country, with Network Rail Chief Executive Andrew Haines on £590,000.

The government has argued that there simply isn’t the money to pay a decent increase to rail workers. Yet many still work for private companies that have seen their fortunes improve considerably during the pandemic. For example, First Group’s rail division recently announced a £107 million profit, much of which will go to shareholders rather than rail workers.

The rail workers’ challenge has stung Johnson and Shapps, who have responded with threats to legislate to force workers to provide a minimum service during a strike, and to allow their replacement with agency workers. Neither threat is likely to be effective, even if followed through.

HS2 was planned for over 15 years, with the first phase now under construction between London and Birmingham. But the wider project is suffering death by a thousand government cuts. Workers has previously commented on the £35 billion worth of cuts made to HS2 in November 2021. A project originally envisaged to transform the railway network and to add considerably to its capacity is now mired in uncertainty and confusion.

The planned HS2 “eastern leg” that would allow high speed services to run from London and Birmingham to the East Midlands, Yorkshire and the North East was axed last November. That was despite numerous statements from Johnson that HS2 would be built in full – some made only weeks before!

The alternative of upgrading existing railways would mean decades of engineering works with massive disruption to train services. The need for those upgrades seems to have recently registered at the Department for Transport, which may know more about railways than Shapps.

A new version of the HS2 eastern leg is planned, but it looks like a much shorter, cheaper version. Cities like Derby and Sheffield will lose out on HS2 services, while the much needed extra capacity will be virtually non-existent.

Not only was the vital eastern leg axed, but that was followed by a decision not to build what is known as the “Golborne link”. This would have allowed HS2 trains to join the West Coast Main Line near Wigan, avoiding a congested stretch of track north of Crewe.

The extra capacity gained by that link would have allowed three HS2 trains every hour to Scotland. Without the link this will be reduced to one an hour, and running at much lower speeds on existing tracks. This effectively means no HS2 trains to Edinburgh.

The outlook for rail could and should be a rosy one. But it will require rail workers to be resolute and united in resisting government attacks on their pay, conditions and the future for their industry, supported by those people – and businesses – who use the trains.

The Elizabeth Line: a British working class achievement [updated]
The future of the rail industry
Plenty of time for gimmicks
Public transport in crisis as buses take a hit
RMT fights government assault on London Transport