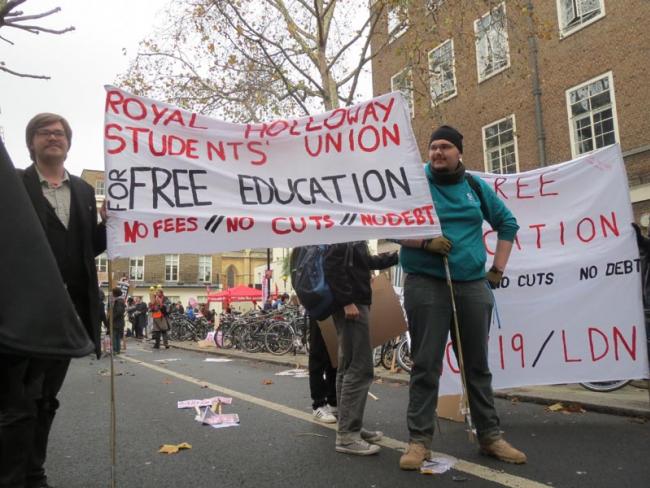 Students from Royal Holloway protesting at the anti-fees demonstration in London in 2014. Photo Workers

With Brexit we can start to repair the damage caused by fees, the European Union and devolution…

Something strange happened at the start of August. Ahead of the publication of A-level results, a raft of “elite” universities put thousands of places into clearing – Leeds, for example, had a thousand course places on offer.

It was one of the first fruits of Brexit, allowing thousands more British students to study at the university of their choice. Essex University vice-chancellor Steve Smith summed up the reason: post-referendum, he said, “People are nervous and universities are being defensive.”

But the insecurity was all in the universities’ minds. Having worked themselves into hysteria during the referendum campaign, they had come to believe their own forecasts of doom.

Universities were also desperate to recruit new students after successfully lobbying the government to abolish the cap on student numbers. Having planned for expansion, they were now panicking.

With university finances now dependent on foreign students, some hugely so, the immediate hysteria was fed by insecurity stemming from the fact that the numbers of EU students had been static or falling for the past five years.

That’s a total fall in England, Wales and northern Ireland of 10,050. In Scotland, meanwhile, without tuition fees, non-UK EU student numbers rose by 4,495.

Scandalously, while EU law demands that citizens of its member states get equal treatment with nationals of any one member state, Scotland may offer free tuition to EU students yet charge full fees to English and Welsh ones – because that’s not discrimination between member states, just inside one.

Yet in the event, Brexit has confounded the universities. The fall in sterling which has given such a boost to British manufacturing has lowered the effective cost of fees (and living costs) for foreign students. As a result, according to the admissions service UCAS, applications to UK universities from the EU for the academic year 2016–2017 rose by 11 per cent over the previous year!

The immediate reaction of the NUS to the referendum was to talk about a “disappointing result” and express fears over the loss of EU funding. In this the NUS was simply parroting the whinges of the employers.

Now, with university students marching together with academics in London on 19 November “in defence of free, accessible, quality further and higher education” as well as for an end to privatisation and cuts, it’s time to cut the ideological strings that bind them to their greedy employers.

‘In the event, Brexit has confounded the universities.’

The scale of the problem is clear. Higher education is far from free and accessible – and it is getting more expensive as well as more inaccessible. Meanwhile, universities are seeking to hide behind Brexit in order to deny reasonable pay rises to their staff.

It’s a sign of the times that most of the discussion – so far – has been about how to maintain the flow of EU-based students into British universities. Those who see the issue as one of how to import EU students need to get real.

At the heart of the problem is tuition fees, currently £9,000 a year for almost all courses and set to rise further. Many blame the Liberal Democrats for the big hike in 2010 to a £9,000 maximum, yet the whole history of university tuition fees is an object lesson in the Labour–Conservative parliamentary charade.

They began with John Major’s Conservative government commissioning the Dearing report into university funding, whose recommendations were implemented by Blair’s Labour government. In 2004 Labour raised the fee cap to £3,000 a year. In 2009 Labour commissioned another report into university funding (the Browne report), and it was the incoming coalition government which implemented its findings, raising the tuition cap (in effect, a minimum as well as a maximum) to £9,000.

While all this was happening, where were the universities? They were cheering on every hike in tuition fees, and asking for more. They are still doing it.

The rise to £9,000 announced in 2010 (to come in force in the academic year 2012–2013) was accompanied by a major shift in government support for undergraduate teaching. Government paid less but students paid much more, leaving universities with large surpluses overall.

Classroom-based courses lost all government support, for example. But where universities used to get fees and government grants totalling £5,700 a head for these courses, they could now charge £9,000. And they did. For laboratory-based subjects, maximum income of £8,269 rose to £10,483.

So forget the whinging: the fees rises have been shifting large amounts of money to the universities.

Along the way, they are failing to provide incentives for British students from poorer backgrounds. Loan or no loan, there’s a limit to how much money potential students from poorer families feel able to spend on a university course, and so the universities began scouring the EU for well qualified students.

The ninefold increase in fees from 2003 to now has not led to a massive boost in provision for students – an analysis by Which? in 2013 detected a mere 18 minutes a week more contact time, on average.

What increased fees have been used for is a big increase in the salaries of top university administrators – the same group who have been shouting loudest for higher fees. For example, the Times Higher Education pay survey 2016 found that almost one in five universities gave their vice-chancellors a 10 per cent increase in 2014–2015.

Universities have also been racking up huge surpluses – £1.8 billion in 2014–2015, the last year for which figures have been available (up from £1.1 billion in each of the previous two years). What they didn’t do was start paying academic staff properly.

What, exactly, is the purpose of all these reserves? We deserve to know, because although the universities try to run themselves like private companies, their new-found wealth comes from borrowed taxpayer-funded fees – and both students and taxpayers have been overcharged.

But even with all this institutional wealth, even with all their salary hikes, those running our universities are not content. They want even more money from undergraduates, so much so that many of them successfully lobbied the government to remove the cap on the number of UK and EU students.

With the cap removed, there is the potential for a further 60,000 students to enter the university population, boosting university incomes by £450 million. Who will pay for this is unclear, as is the exact cost. But the effects – good and bad – are starting to be felt already.

One effect was the large number of places in clearing this summer. The chaotic rise in student numbers as a result of lifting the cap is bound to lead to larger classes and less contact time for students, as well as increased pressure on academics. But you can be sure the vice-chancellors will use the rise as an excuse to pad their salaries even further.

Another effect is the pressure on student accommodation, already in short supply in university towns. In September, it was revealed that at Warwick University 120 undergraduates and 150 postgraduates were having to share rooms after the post-referendum surge in admissions from the EU swamped the available accommodation.

Newcastle University and Northumbria University now have 70 per cent and 114 per cent more students respectively than they did in 2000, according to local newspaper Newcastle Chronicle. One result is that student blocks have become property developers’ targets, with millions of pounds changing hands and student beds being valued at £90,000 each. No wonder rents are soaring.

It’s not just private developers. UCL in London runs its own student properties on a 45 per cent profit margin, say students there. Last year it was forced to pay back a total of £400,000 in rents to students who had been plagued by rats.

Rats or no rats, UCL is putting up student rents by about 5 per cent a year, taking advantage of students desperate for accommodation in London. Meanwhile, rent strikes are spreading like wildfire as students say enough is enough.

In this dire situation, what is to be done? First those in academia need to come to terms with the referendum result and plan for successful universities in an independent Britain. And all of us need to start thinking about how they can be changed to better serve the needs of our society.

British researchers have always been part of the global academic system – indeed, the Royal Society appointed its own Foreign Secretary in 1724, 59 years before the government created the post now occupied by Boris Johnson. That global integration won’t change.

Before Britain joined the EU’s forerunner, the EEC, students were spending years abroad in European (and other) universities. That isn’t going to change once we leave. Indeed, there’s no reason why we should leave the Erasmus programme – after all Turkey is a full member of the complete Erasmus scheme (Erasmus+, as it is called).

Yes, research funding certainly will change. No longer will British academics have to tailor chunks of their research according to what the EU wants to fund, so we should see an end to scanning endless “calls” emanating from Brussels. Instead, British researchers should demand funding for the research they feel needs to be done. Once we have left the EU, there should be plenty of money to fund that research.

Secondly, students and academics should unite to fight for full transparency about university finances. The accounting books should be opened so that everyone can see where the money is going (or isn’t).

Along with that, the fight is much more than one against rising fees. It should be one that asserts the value of accessible and affordable education for all. That means an end to the iniquitous fees system, along with a cancelling of all outstanding fees debt.

It is a scandal that our government’s (taxpayers’) money is spent on loans for EU students who choose to study here. That subsidy should be stopped, if possible even before we leave the EU.

Instead, money should be spent on helping young people from poorer backgrounds to go to university. All the evidence suggests that the richer the parents, the more likely the children are to go to university, and to Russell Group universities in particular. So restore proper maintenance grants, instead of abolishing them altogether as the government has just done.

The combination of tuition fees, the European Union and Scottish devolution has been deeply damaging to Britain’s higher education. In particular, it has encouraged universities to fill their places without concern for the education and financial welfare of Britain’s young people. With Brexit, we can start to repair the damage.

• Related article: Why our universities are in global demand