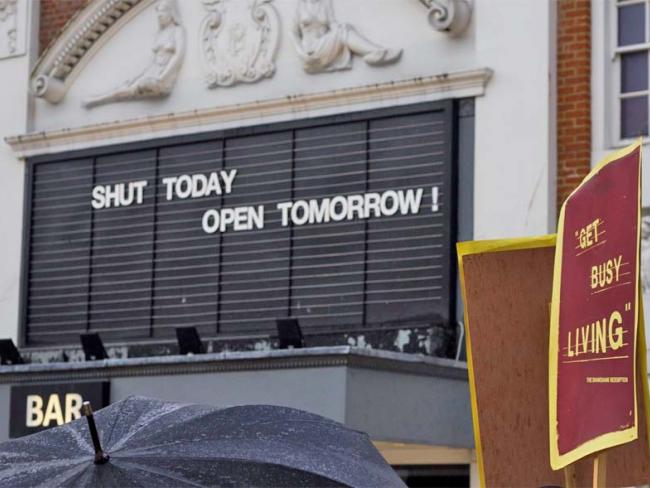 In a vindictive move harking back to Victorian factory owners, Picturehouse Cinemas, owner of the Ritzy art house cinema in Brixton, announced on 27 October that a quarter of the workforce would now face the sack – to pay for the wage rise won in one of the most imaginative and vociferous struggles of 2014.

Ticket sellers and ushers at cinema, supported by their union BECTU, conducted a long series of Sunday walk-outs in their first experience of struggle. They were fighting to force their employer to pay them the London “living wage” – at £8.80 an hour for an adult, higher than the minimum wage to compensate, in part, for the added cost of living in London.

But the “London living wage” is still low, itself neither a great nor an independent aspiration, since it is calculated by the Greater London Authority.

They used music, video, FaceBook, and innovative artwork to contrast the supposedly “ethical” face of the employer with its refusal to pay enough for a “sustainable life” in London. Placards proclaimed, “I don’t want to survive – I want to live.”

As the boycott went on, and the employer walked away from talks, the youthful Ritzy workers gathered more and more support from local shops and people, and from other cinema workers – from workers at the Curzon where an earlier battle had gained union recognition, at the Odeon, the Everyman, the Coronet, and at Cineworld, the multinational conglomerate which had recently taken over the Picturehouse group with a turnover of £400 million.

Together they marched from the British Film Institute to City Hall. Mayor Boris Johnson, always one to court popularity, had declared himself in favour of the Living Wage, which had already been adopted by BBC and BFI contractors, the BFI IMAX cinema, BFI South Bank, ITV, the Royal Opera House and the National Theatre.

‘A feature of the Ritzy campaign was a high degree of independence and self-motivation within the framework of union discipline.’

In the end, after months of protest, they were forced to go to ACAS. Faced with an intransigent employer and the prospect of becoming disunited, BECTU members agreed to a settlement just short of the London target – an achievement nevertheless, amounting to a 26pc pay rise over three years and a pledge to continue the fight.

A feature of the Ritzy campaign was a high degree of independence and self-motivation within the framework of union discipline. Union officers reported that their input was barely needed. As the workers thanked their supporters, they put out this statement: “As a strong collective of staff at the Ritzy, doing things differently has been key to our success to date. We have shown that workers don't simply have to put up with poverty pay, or feel powerless and isolated.”

It is just as well that their morale is high. BECTU is currently preparing to ballot on further action to fight the sackings. A feature of the strikes had been the number of celebrity artists, directors and writers lining up to show their left-wing credentials in support. But it will be the emboldened Ritzy workers themselves who decide the outcome of the next phase of their struggle, as it did the previous phase.