Shhh! Don’t mention Britain’s role in the bombing of Yemen... 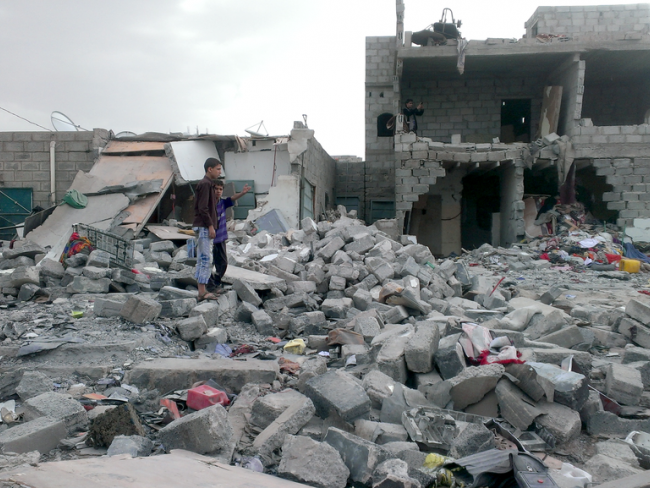 What the UN has called the greatest humanitarian disaster in the world is taking place more than 3,500 miles away in Yemen, at the southern end of the Arabian Peninsula. Intervention by external forces has weaponised political instability in the country as Saudi Arabia and a coalition of eight other mainly Sunni Arab states attempt to pummel an insurrection by a Shia-led opposition.

So far, so uncontroversial. What shouldn’t be controversial, either, is an acknowledgement that the Saudi coalition is receiving military and logistical support from the USA, Britain and France.

A United Nations Development Programme (UNDP) report on the situation in Yemen published on 23 November notes that the conflict “has been devastating to human development – particularly to those most vulnerable and marginalized in society”.

Previous research estimated that by the end of 2019 the conflict had been responsible for 233,000 deaths in a population of some 29 million, mostly caused indirectly through shutting down access to food and health services.

But it’s even worse than that. The UN Development Programme found that Yemen’s conflict will lead to 377,000 deaths by the end of 2021 – nearly 60 per cent of which are indirect and caused by issues associated with conflict like lack of access to food, water, and healthcare. “These deaths are overwhelmingly made up of young children who are especially vulnerable to under and malnutrition,” it notes.

‘A Yemeni child under the age of five has been dying every nine minutes.’

In 2021, a Yemeni child under the age of five has been dying every nine minutes because of the conflict, the UN estimates. Yet the British government continues to sell arms to the Saudi regime, which is leading the assault on Yemen.

There has for some time been clear evidence that British weapons have been used in attacks on civilians. Yet last year, the Johnson government authorised arms sales worth £1.4 billion, almost all for bombs and missiles.

But secrecy is the name of the game. The £1.4 billion deal only came to light months later in a government release of statistics at the start of 2021, unearthed by the Campaign Against the Arms Trade.

That decision brought Britain’s total estimated sales of military supplies to Saudi Arabia and its eight coalition partners – Egypt, Morocco, Jordan, Sudan, the UAE, Bahrain, Kuwait and Sudan – to more than £20 billion since the bombing of Yemen began in 2015. The US administration also continues to back the Saudi assault, despite President Biden’s promises to end US support.