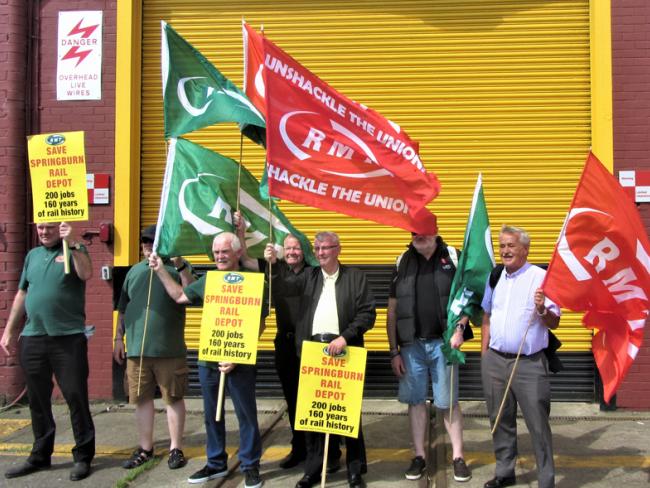 Unity in struggle: workers protesting against the closure of Caley rail engineering in July 2019, marked by the SNP’s failure to intervene. Photo Workers.

Unable to achieve its aims through democratic means, the SNP is edging towards a set of manoeuvres that would see Scotland leaving Britain by stealth…

With the cancellation of their annual party conference, scheduled for mid June in Aviemore, the Scottish National Party is experiencing a groundswell of opinion in its ranks that is beginning to lead its policy in an anti-democratic direction.

Their “Plan B” surfaced in the wake of the historic defeat of separatist ideas in the 2014 referendum on Scottish independence. It has now been geared up again into a desire for “UDI” – a unilateral declaration of independence. In other words, the devolved administration in Edinburgh would plan to leave Britain, without another referendum. The scenario envisaged is one in which the British government refuses to organise another referendum on Scotland breaking away.

The demand would then be that the SNP manifesto for the 2021 Holyrood elections should contain the promise that the achieving of a majority by parties supporting independence would give a mandate to start negotiations with the British government on a timetable for a separate Scotland. This proposal had been due to be debated at the June conference. In the absence of such a discussion the idea is gaining traction via backroom caucuses and online.

Behind the new policy direction is an unrelenting fear of enduring the democratic process again, especially in the face of a stubborn majority in Scotland for British unity. Workers and their organisations must begin to recognise the importance of the strength of sticking together in this period of crisis.

‘A plan to leave Britain, without a further referendum.’

It seems that quite the opposite line of thought has been adopted by the SNP administration. It is a line of thinking that seems to assume that separation has already been achieved. Thus a litany of policies designed to differ from British Government policy has emerged from Edinburgh over recent months during the current pandemic.

Quite apart from running what amounts to an independent foreign policy – well documented in Workers over recent years – nearly every pronouncement on emergency medical policy steers Scotland in a contrary direction. While the Scottish devolved administration keeps its eyes firmly on the horizon of globalisation, opposition politicians hardly oppose, carping from the sidelines while quarrelling among themselves or dreaming of fantasy federalism.

Announcements on re-opening schools, the wearing of face-masks, relaxing lockdown, transport policy, business grants, numbers of people allowed to meet, sports comeback, even the forbidding of the name “Nightingale” for the new emergency hospital in Glasgow, and on many other areas of life, never match the announcements coming from Westminster.

Depending on which radio, TV or social media outlet you listen to, the level of confusion can vary greatly. The SNP is taking advantage of the vacuum created by Boris Johnson, allowing the impression to grow that he is speaking no longer as UK prime minister but as some kind of “first minister” for England only.

It is in this free fire zone that the separatist policy makers have acted. They have taken the opportunity to drive more and more wedges between Scotland and the rest of Britain. Direct lines of communication between Scotland and the European Union to discuss a special relationship once British independence has been achieved are an ongoing attempt to undermine the prospect of a clean break from the EU. The same can be said about high level meetings with the Irish Republic.

‘Being part of Britain has enabled Scotland to weather the current storm...’

But it is in the wide area of legal affairs where divergence is particularly growing. The planned introduction of a new law in Scotland that has been dubbed “the blasphemy law” goes against the spirit of the secular nature of British society. It is also widely viewed as undermining the British tradition of free speech that workers have fought for and established over past centuries.

The progress of this legislation can be traced back several years to well-meaning attempts to solve the problems of religious sectarianism associated with some football teams in Glasgow and Edinburgh. These plans were widely seen to have been poorly drawn up and as botched.

Yet the proposed new legislation is far more generalised than the very specific Offensive Behaviour at Football Act. The Hate Crime Bill seeks to criminalise the “stirring up of hatred” against a wide range of designated groups related to age, religion, race, gender and disability. This sounds worthy enough but there is a fine line to be drawn between legislating against behaviour and legislating against speech.

The Bill is being opposed even by those it purports to protect, such as religious bodies. As Stephen Daisley of The Spectator points out, “If it will be forbidden to abuse Christianity and Christians, why shouldn’t it be forbidden also to abuse Scottish nationalism and Scottish nationalists?” If there’s a bandwagon to jump on, the Scottish Government will make sure theirs is bigger, blingier, and more misguided than anything Westminster could dream up, and this bill is a classic example.

The pros and cons of this legislation will no doubt be argued out for some time – but for the unity of the British working class the important thing to argue for is one unified law. In other words, one law for all. Divergent laws feed into break-up.

In fact, the SNP and other separatists have encouraged such “stirring up” themselves. They opened a Pandora’s box of divisive identity politics in the recent decade, with their followers engaging in ongoing anti-English tirades. Mention of this most frequent of all “hate speech” in Scotland is noticeably absent in the Bill.

It is saying something when Andrew Wilson, the Scottish first minister's own economist behind her separatist plans frankly states that “Scotland’s economic recovery from the coronavirus pandemic will be the worst in the developed world.”

Wilson was commenting following the publication of official data showing there had been a 2.5 per cent decline in Scotland’s GDP from January to March this year, compared to the previous three months. New data suggested the decline in June could be over 18 per cent. Andrew McRae, the Scotland Policy Chairman of the Federation of Small Businesses, observed that “these new numbers show the epic scale of the challenge ahead of us.”

The parlous state of the Scottish economy, with its failed banks bailed out by the British taxpayer for over a decade, and the paralysis of its oil industry and large tourism sector, would not have augured well for supporting workers and businesses during the current medical emergency.

Being part of Britain has enabled Scotland to weather the current storm. With over 628,000 workers on furlough schemes and 146,000 self-employed workers on support packages, Scotland has experienced the resilience of being part of the UK.

In a period when companies are under threat of default and bankruptcy, workers in all walks of life must stick together – in class unity as well as national unity. It is British independence and the resultant national control over our economy that will give us the only hope for survival. Anything standing in the way of this existential national survival – such as petty separatism – must be swept away.