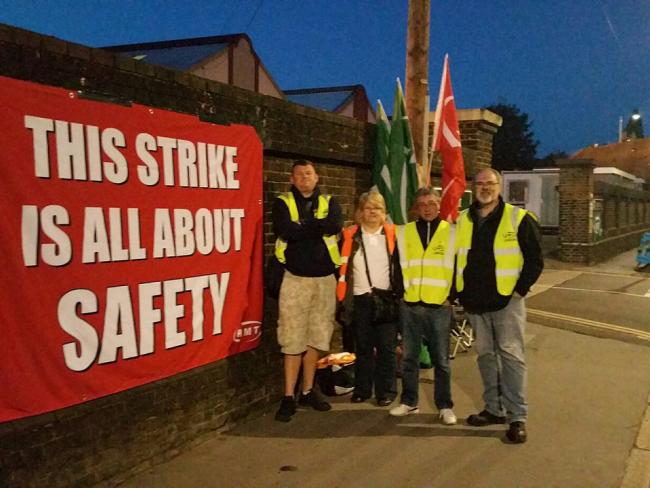 The government wants massive cuts to staffing on Britain’s railways regardless of the impact on safety or quality of service. This is currently being played out in the increasingly bitter dispute in Southern rail, part of the Govia Thameslink Railway franchise.

RMT is campaigning to retain guards on trains. The decision by train driver’s union ASLEF to again ballot its members for industrial action over the issue is a great boost. ASLEF had to tread carefully following a legal challenge to its first ballot.

‘Southern is refusing to negotiate.’

ASLEF general secretary Mick Whelan accused Southern of refusing to negotiate. “They want to impose, not to discuss. They have dug in their heels and forced us to ballot our members” he said. GTR are of course enthusiastically carrying out the bidding of their government paymasters.

RMT‘s guard members are currently in the middle of another 14 days of intermittent strike action lasting through to 8 December. They reacted angrily to news that publicly owned Network Rail has bailed out Southern to the tune of £48 million in “compensation”. This followed Prime Minister Teresa May announcing an extra £20 million payment to “improve performance”.

Mrs May would do better by listening to Southern’s long-suffering passengers, 1,000 of whom have donated £25,000 to fund the legal costs of an application for a judicial review of the franchise. They clearly understand that it is the government that is responsible for creating the current mess and not the workers and their unions.

A protest and rally at the Houses of Parliament has been organised by RMT for 1 November and is supported by sister rail union TSSA.