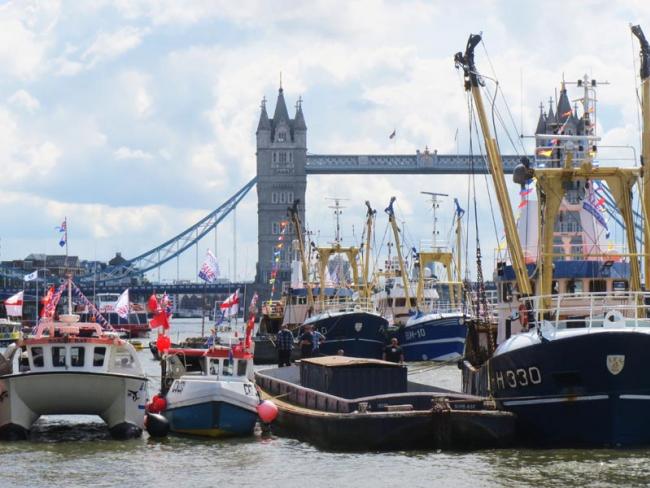 Moored upstream of Tower Bridge, part of the Brexit flotilla organised by Fishing for Leave that sailed up the Thames just before the EU referendum. Photo Workers.

Fishermen are overwhelmingly in favour of Britain taking complete control of its inshore and international waters as it leaves the EU, according to a new survey from Cardiff University produced at the end of April and reported on in detail by Fishing for Leave.

Fishing for Leave, which seeks to represent the views and interests of the grassroots fishing industry, welcomed the report as providing a good evidence base of the views of fishermen. FFL’s director Alan Hastings said, “The findings of this survey graphically illustrate that the majority of the industry want a fresh start”.

Management of UK fisheries post-Brexit: a fisherman’s perspective details the university’s findings from a poll of British skippers from around the entire coast of Britain and northern Ireland, with responses from all sectors, from the largest pelagic (open sea) vessels to the smallest inshore boats. Two-thirds want the EU’s hated Common Fisheries Policy completely scrapped and all foreign boats to be excluded from British waters post-Brexit. Fishing communities were hugely supportive of leaving the EU.

56 per cent of respondents want to see a “days at sea” policy replace quotas as a means of regulating the industry and conserving fish stocks. This would limit the number of fishing days per boat rather than the CFP’s wasteful quota system, which forces fishermen to throw back catches which don’t meet the type or amount of fish which are allowed. The rich mixed fish stocks typical in British waters mean it is particularly difficult to predict what will be caught, leading to fleets having to discard perfectly good fish.

The survey also asked about the social aspects of the fishing industry – hitherto largely ignored in drawing up management policy. Basically, fishermen themselves with all their knowledge and experience have not been asked what they think, as policy has been dominated by economists and marine conservationists. And these took no account of the communities that the fisheries were supporting. In fact they seem to have been deliberately snubbed and run down both by the EU and the British government.

The respondents want to see this remedied, and call for the opportunity of Brexit to enable “a new relationship between fishermen, scientists and the government alongside an improvement in relations between different sectors of the industry”.

Nearly half the skippers said they would encourage family members to be involved in the industry. This shows the strong family, historic and cultural ties in fishing, in spite of the hard and dangerous working conditions.

FFL – which organised the Vote Leave flotilla of fishing boats which sailed up the Thames during the referendum campaign – has been worried that Theresa May did not announce Britain’s withdrawal from the London Fisheries Convention at the same time as invoking Article 50 on 29 March. As this also requires two years’ notice of leaving, the omission leaves a dangerous gap which could allow EU boats to continue to fish in British onshore waters.

Already, the Danish government is asserting its “historic rights” dating back to 1400 to fish here. FFL points out that these claims are spurious but herald objections of EU fisheries to losing their fishing rights. Currently 40 per cent of Denmark’s annual catch is from the 200-mile international zone which should revert to British control after Brexit. A third of the take of all European boats is from these waters, and 60 per cent of the fish caught in the British zone is by the EU. The Danish foreign minister said that the issue is crucial for Danish fishing communities. That is for them to deal with – our concern is British communities surveyed in the Cardiff report. Brexit means we can look after our national interests.

As FFL declares: “It is a simple case of safeguarding and reclaiming our national resources and to take back control on this acid test of Brexit the government should not betray British fishing and coastal communities a second time by caving in to appease EU demands.”

Deal - of a sort - on fishing
Fishing: where is the Brexit dividend?
A truly independent coastal state?
Newlyn sets out new plans
Seafood: New names from Cornwall