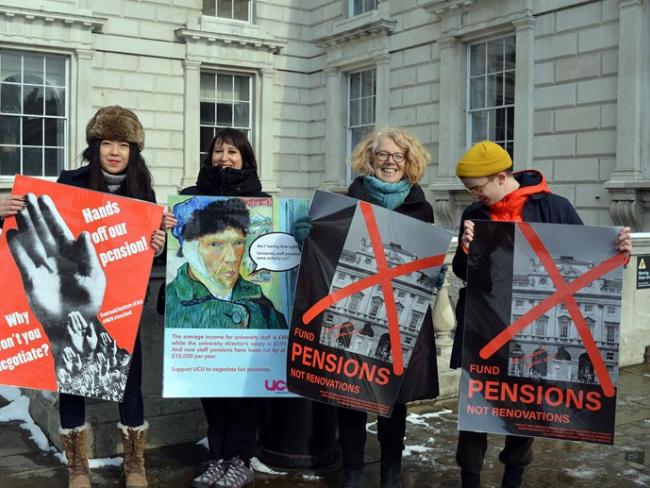 UCU members at the Courtauld Institute, London, putting their point over while on strike, 28 February. Photo Julian Stallabrass (CC-BY-SA 2.0).

The long-running dispute over pensions conducted by members of the University and College Union (UCU) has been suspended after they voted by 64 per cent to 36 per cent to accept the employers’ latest proposals.The political gains the University College Union workers have made so far in their brilliant response to the covert EU-led pension offensive have been tremendous.

Membership has soared, too, with some branches recording increases of 50 per cent – much needed in a sector where many workers have assumed that a union will always be there without feeling they need to make the effort to join.The employers in Universities UK (UUK) declared in late 2017 that they needed to close the Universities Superannuation Scheme pension guarantee to future service and to replace it with a stock market-related pension with no guarantees.

Following intense action by union members across Britain the UUK has now agreed that the scheme should continue with a future guaranteed pension promise.

But the offer leaves open a big question: Should the value of the current pension guarantee continue to accrue for future pensionable service, or should it be diluted?

To address this question the employers are proposing an “independent pension panel” to review how the scheme’s pension fund deficit has been arrived at.

That deficit has fluctuated over time from £12 billion to £6.1 billion. How come? Only by studying the machinations of the EU will University College Union workers be able to understand what has been happening to their pension, and what they have to do next.

The EU has prescribed the pension valuation method that must be used in all occupational pensions. In essence, it is disguised politics where the method is rigged to throw up a “shock and awe” deficit ,so that workers capitulate and give up on a meaningful pension guarantee. Quite simply, the UCU must now demand that the EU, through the European Insurance and Occupational Pensions Authority, take its hands off the University Superannuation Scheme.

• A longer version of this article is on the web as Truce in universities pensions fight.

The dark hand of the EU
Putting profit above staff and students
Strong support in Glasgow for university pay and pensions fight
University workers start strike action
Pensions: thanks to the EU, it's not all over yet