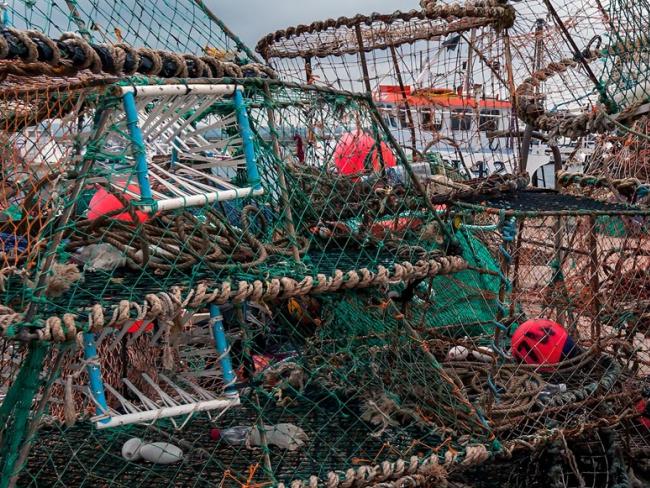 Crab and lobster pots on the quayside at Torquay. At the beginning of February the EU unilaterally banned the import of live shellfish from almost all the waters around Britain. Photo Chris Lawrence Travel/shutterstock.com.

The British fishing industry was strongly in favour of Brexit, and the government trumpeted it as a big beneficiary of leaving the EU. But that’s not the end of the story…

In the weeks since the EU-UK Trade and Cooperation Agreement  was signed, the fishing industry has been targeted by a storm of new bureaucracy and obstacles. And it will not see an immediate end to EU boats fishing in British waters.

Catch certificates and health documents are now required  for exports to the EU, our biggest market – and also to Northern Ireland from the rest of the UK. They must be issued by a vet. Troublingly, it seems there aren’t enough vets where they are most needed, especially at the major Scottish export hubs.

Arrogantly, the EU thought Britain would back down, but it lost a quarter of the previous entitlement to fish in our waters. Now it is being plain vindictive. And some at home are also trying to throw a spanner into the works.

The Scottish Seafood Association points the finger firmly at the SNP-dominated Scottish administration, where hopes of dashing Brexit still linger. Checks that should take one hour are reportedly now taking five times as long. Food Standards Scotland, responsible for issuing health documentation, seems not to have properly prepared for the new arrangements.

Any major change in trading arrangements will hit some snags. One of the first to come to light was incompatibility between French and British IT systems, causing delays to landing fish stocks in France. These have largely been resolved.

Then at the beginning of February the EU abruptly banned  the export of all live bivalve molluscs – cockles, mussels, scallops and oysters – unless from clean Class A waters. There are very few around the English and Welsh coast. Molluscs from our Class B waters have to be cleaned before being deemed fit for human consumption.

Many shellfish companies, typically working in Morecambe Bay and North Wales waters, had previously exported their catch for cleaning on the continent. The EU will not allow this any more. Shellfish companies now find this route to market closed off, and a sector worth millions of pounds arbitrarily shut down.

With so much uncertainty, blame is being apportioned left, right and centre. For instance, fish hauliers have staged one or two desultory protests in central London, castigating the government for not achieving total access to our waters in one fell swoop. Some just wish we’d never left the EU in the first place and blame Brexit for the chaos, whatever the cause.

Instead the fishing industry needs a sense of perspective, as do all British workers when they look to the future. It wasn’t Brexit that laid waste to our fishing industry and to so many communities – it was decades of decline and underinvestment. And that mostly happened while Britain was bound to the EU and its Common Fisheries Policy, whose quotas and one-size-fits-all policy denied Britain access to most of our own waters and the ability to manage stocks.

The Trade and Cooperation Agreement unquestionably leaves a lot to be desired as far as fishing is concerned. The weeks following its signing were always going to be a tricky period for fishing. And the pandemic has squeezed demand as restaurants are closed everywhere.

But with independence comes responsibility. We can no longer shrug our shoulders and point a finger at the EU. Britain has taken a big step on the way to returning our waters back to British control. We will have to hold our elected government to account as we seek to rebuild our fishing capacity and bring some stability to scattered fishing communities all round our coasts.

‘We have declared that we will decide what happens in our waters...’

Fishing accounts for just 0.1 per cent of British GDP, but it proved to be a major hurdle during the protracted negotiations over the agreement. Soundbites such as “Taking back control of our waters” were repeated endlessly by the government as it sought to assure us that this traditional and iconic industry would thrive once again.

Now the agreement has been published, we should examine what it holds for fishing (and other sectors) in more detail.

The headline is the progressive reduction of total allowable catches for EU vessels in our waters over the next 5 years, up to 25 per cent of what they take now. Further variations are subject to annual negotiation. Certainly that’s not taking back full control immediately, more a series of steps towards it.

The EU was holding out strongly for a 14-year transition. In that light the deal isn’t quite the sell-out some insist. Negotiation, by definition, rarely concludes in outright victory for one party. But we have declared to the whole world that we will decide what happens in our waters.

The ball is in our court. Decades of decline mean that our capacity to catch, process and sell fish must be rebuilt if we are to land all of the fish in our waters. That decline started before Britain accepted the Common Fisheries Policy. Release from the EU is an opportunity and not a silver bullet.

The Trade and Cooperation Agreement reduces the scope of EU boats to fish in our seas, but that’s not the whole story. Substantial parts of the British quota have been sold to foreign boats sailing under a British flag. Half of England’s quota, for instance, is owned by companies in Iceland, Spain and the Netherlands, accounting for some 130,000 tonnes a year.

Current rules permit this arrangement if the boats have an economic link to Britain, such as landing most of their catch here, or having a majority British crew. The trade agreement does nothing to ensure that the additional catch in our waters goes to British-owned boats and not just those flying the flag.

Control of British waters means protecting fisheries and conserving stocks. There are many steps that a resolute
government could take to preserve fish stocks and protect the marine environment.

The government has already banned pulse fishing, which targets flat fish with strong electric currents, but adversely impacts other species.

And there is growing pressure to ban the enormous supertrawlers, which hoover up everything in their path, as well as bottom trawlers, which recklessly drag heavy fishing gear over the seabed.

Norway has given a decisive lead on protection. Earlier this year it reduced EU quotas for cod in the Svalbard island protection zone. Bully that it is, the EU declared its own higher quota for the area.

The response of the Norwegian fisheries  minister speaks volumes. “Norway is protesting the EU’s one-sided licensing of fishing quotas in the protected fishing zone around Svalbard,” he said. “That’s in violation of Norway’s sovereign rights under maritime law…” He had “therefore made it clear to the EU that every single fish caught beyond Norway’s own issuance of quotas will amount to illegal fishing and will be dealt with by the Coast Guard in the usual manner.”

A national government, acting in a sovereign way on behalf of its people will see off any bully.

Britain will also need to be assiduous in safeguarding its newly reclaimed sovereignty. One focus must be on the Royal Navy’s Overseas Patrol Squadron, the long-established unit responsible for patrolling our waters. Presently the squadron comprises four offshore patrol vessels and one helicopter. Measured against the 80,000 square miles of sea which is Britain’s Exclusive Economic Zone, it is manifestly inadequate.

The likelihood of armed conflict at sea with other nations may be low, but protecting our fishing rights, and crucially, conducting routine inspections of fishing vessels in our waters, requires a force large and flexible enough to be capable of rapid response. We have seen the Army play a significant role in assisting with the vaccination programme. The Navy must be bolstered to deliver protection offshore.

The cost of fishing
Fish take away
Deal - of a sort - on fishing
Fishing: where is the Brexit dividend?
Newlyn sets out new plans