Skip to main content
Home » News/Views » TTIP and the unions

TTIP and the unions 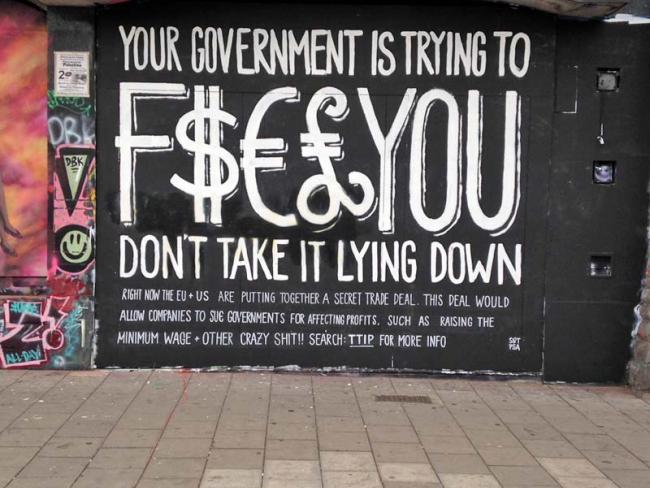 Until recently, general awareness of the Transatlantic Trade and Investment Partnership (TTIP) has been limited, with knowledge about what it means even less common. The veil of secrecy is being lifted – not, of course, by those negotiating the “agreement” but by the campaigning of trade unions and others such as 38 Degrees and War on Want.

If allowed, TTIP would lead to the privatisation of everything that is public – and dilute standards of health and safety imposed by workers through years of struggle. National governments seeking to renationalise services or utilities would find themselves overruled, barred from interfering in the “right” of corporations to make profits. All is to be enforced by corporate lawyers sitting in secret to decide how much to fine governments through the Investor State Dispute Settlements mechanism.

Unions have for too long managed to hold contradictory positions. Many support the EU, and the TUC even endorses the EU’s exclusive right to negotiate TTIP on our behalf – while wanting to renationalise that which was previously public.

This year’s TUC congress unanimously carried a motion condemning and pledging outright opposition to TTIP. Speakers from Unite, GMB, UCU, HCSA, Unison, Musicians’ Union and PCS lined up to warn of the dangers from this trade agreement. Some focused on the threat of total privatisation of the NHS and limited their opposition to demanding the exclusion of the NHS from the agreement. But as the delegate from the UCU eloquently expressed it, motions carried the previous day calling for the renationalisation of utilities and rail can be forgotten unless TTIP is defeated.

That will be a tall order given what we are up against but opposition is growing in the USA and the countries of Europe. Failure to defeat TTIP will mean that the siren voices warning of the future irreversibility of privatisations will be proved correct – for as long as we allow ourselves to be ruled by the EU.