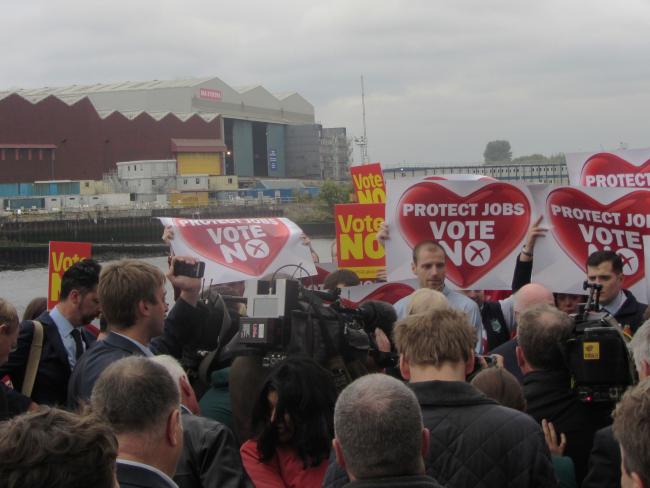 BAE workers rally September 2014 - voting no to independence and yes for a united Britain. Photo Workers.

Torrance looks at the debate about the Scottish referendum. He agrees with the SNP that a referendum is necessary for legitimacy. As Sturgeon said on 29 January 2014, “I don’t believe a majority of seats at any election gives us a mandate for independence.”

Holding a referendum was beyond the powers given by Westminster to the Scottish government. The Edinburgh Agreement in October 2012 between the coalition government and the SNP included making legal orders which temporarily devolved to Holyrood the power to hold a referendum. But Sturgeon claimed that it was a decision for only the Scottish government to take. Salmond disagreed with her, saying, “An agreement with Westminster was necessary to put the referendum beyond legal challenge.”

Torrance notes the SNP’s hypocrisy about NATO wars. The SNP rightly denounced the Labour government’s support for NATO’s illegal war on Iraq. But it forgets that it backed NATO’s (and the Tories’) illegal war on Libya. When you are in NATO, you have to end up backing their wars.

Torrance looks at the SNP’s long love-affair with the EU. In 1995 Sturgeon proclaimed, “Europe is our flagship policy”, whereas many might have thought that was Scottish independence. And in 2000 the SNP joined the doomed “Britain in Europe” campaign which wanted us to scrap the pound and join the euro.

Ms Sturgeon has proposed that Scotland (or Wales or Northern Ireland) should be able to veto a majority vote in an EU referendum. But she applies that only vetoing a vote to leave; she doesn’t want anyone to veto a vote to stay in. Torrance argues against that idea. He claims that’s the same logic as if England, Scotland or Wales should have had a veto over the Scottish vote in the 2014 referendum.

As a nation we believe that an overall majority of the votes cast across Britain as a whole should decide whether we leave the EU. In March 2015 a survey by a team from Edinburgh University found that people across the UK oppose Sturgeon’s call for multiple vetoes on a British exit from the EU. Clear majorities in England (68 per cent), Northern Ireland (60 per cent), Wales (64 per cent) and Scotland (55 per cent) disagree with the Scottish first minister.

Sturgeon and Salmond have constantly asserted that “Constitutional referendums are once-in-a-generation events.” So SNP policy is that we have no right to have a referendum on the EU. It thinks that the 1975 referendum was too recent to be repeated.

However, Sturgeon and the SNP believe that the 2014 Scottish referendum is not too recent to be repeated as soon as next year. The SNP has not ruled out promising another referendum in its manifesto for the Scottish parliamentary election of May 2016. If the SNP won that election, it could call another referendum before the end of 2016. A generation is a short time in SNP politics.