A way forward for workers 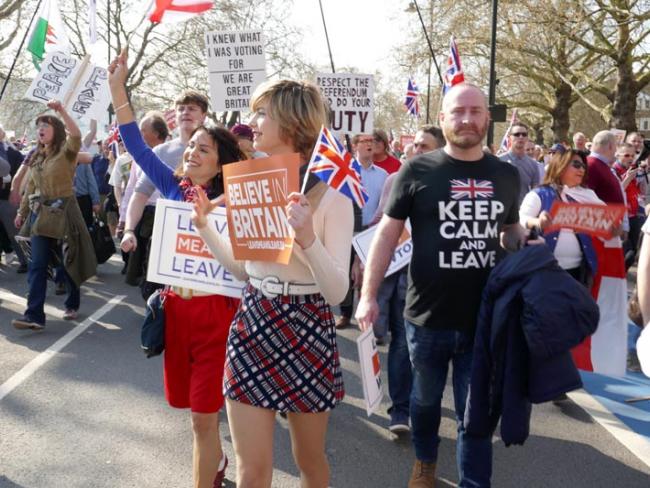 Demonstrating in London for a proper Brexit, 29 March 2019. Photo Workers.

The CPBML has published the political statement from its 19th congress, held last November. It concentrates on the challenges for the working class…

The starting point for the CPBML’s 2021 congress statement, entitled “Real Control for Real Independence”, is the fact of Britain’s departure from the European Union. “It is an immense achievement,” the statement notes, “a victory won despite the united opposition of the establishment – the City, the CBI, the political parties, the archbishops, not to mention the media and most of the trade union executives.”  And won by workers.

But now a new fight faces us: real independence, the “complete opposite of the phoney independence offered by the SNP or Plaid Cymru”. Real independence “is about asserting control, not handing it back to the EU”, as the separatists want.

That fight will not be easy. It means going against the globalist plans of imperialism worldwide. “Finance capitalism seeks a world where it can operate without hindrance, an approach summed up in the new phrase of Global Britain.” They mean a world where capital created here can migrate at will, and they are happy to grant global capital “the liberty to shift in and out of Britain as it feels fit.”

Not just the free movement of capital, but of labour too. The statement notes how the capitalist class has no intention of controlling migration, citing “the effective abandonment of a cap on immigration, the explicit abandonment of any requirement to show that jobs cannot be filled by skilled labour here, the massive extension of ‘pilot’ schemes for seasonal workers.”

In effect, global capitalists want to carry on as if Britain had never left the EU, shifting goods, services, capital and workers across borders without hindrance. “Forget the patronising talk of the ‘left behind’ – millions are to be deliberately dumped in the flight to the so-called free market.”

The statement identifies three key dangers for the working class. The first is the possibility of the break-up of Britain – which if permitted would result in a constitutional upheaval that would weaken the historic unity of the British working class. “A united Britain is our best defence against predatory global capital.”

The second threat is the “onslaught on living standards driven by a mounting legacy of debt, not created by the Covid-19 pandemic but now even more severe”.

The statement continues: “This all makes the current period highly dangerous. History shows that when finance unravels in a major way (not just in a normal periodic slump) either workers take control or the call for military war and a British domestic war on workers becomes generalised.”

War, then, is the third threat. The statement was written before the current (manufactured) crisis over Ukraine, and does not actually mention the country, but it does define the era we have entered.

“We said that the demise of socialism in the USSR would lead to the untrammelled establishment of capitalist trading blocs, and that trading blocs can become warfighting blocs,” the document asserts. “That is now happening. The people must intervene in order to prevent the current provocations from escalating into war.”

‘The fight for independence must make a new Britain, not a re-creation of the old…’

What is needed is for the same people who forced through our escape from the EU – “the honest, concerned mass of working people – to form a new coalition against war. Out of NATO! The struggle will be harder than leaving the EU, but just as essential.”

The central section of the statement concentrates on a future for Britain. Independence, it says, requires that workers assert the right to work, skill, housing, education and health. “Above all, the right to be a truly productive nation, a nation where things are made.” Because a working class must have modern industry, based on control over the technologies essential to the economy.

Alongside that, the statement deals with issues of energy security and food security – both shamefully neglected by this government and its predecessors going back many decades. The environment, too, is an area where freedom from the EU opens up the prospect of great gains – “but only if control is taken away from capital”.

And the statement also tackles what independence should mean for health: “train enough health professionals here and stop trying to get them from among EU and non-EU workers”.

Covid-19 is still with us, and there are some vital lessons to draw from it. “When the Covid-19 pandemic began, few of us could have had any idea of the extent to which it would transform thought in Britain (not to speak of the rest of the world). Even now we probably underestimate the lessons workers are drawing from it. Very little in Britain will be the same again.”

Chief among these lessons are that social planning is essential to life and that over-reliance on long supply chains is a threat to health and life. The “predictable and lamentable” actions of the European Union have, for a while at least, silenced some of those who still dreamt of overturning the referendum. Above all, the statement notes, the referendum vote “was an affirmation that decisions affecting Britain must be made in Britain”.

The fight for independence must make a new Britain, not a re-creation of the old. The working class, though, has yet to accept that it must be the agent of change.

Hence the statement’s conclusion: “Our task as a Party is as it was when we were founded: to change the ideology of the working class. Always materialist in approach – how could it be otherwise in a class whose existence is defined by work that changes material reality? – workers have still to grasp that they must be the agents of change.”

• The full text of the statement is available online at cpbml.org.uk/real-control.

Tech sovereignty and the working class
Ministers plan yet another insult to Brexit
Keep land for food
Minerals and the future: the new dig for Britain
Energy security – essential for independence