Skip to main content
Home » News/Views » What are we waiting for? Just leave!

What are we waiting for? Just leave! 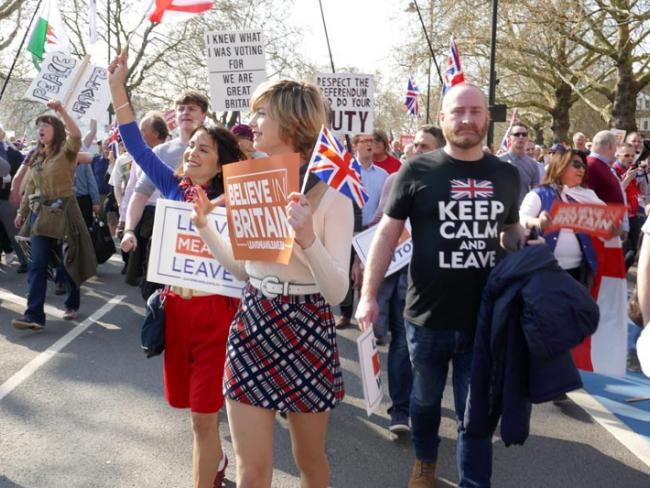 Marchers in good heart heading for Westminster on what should have been Independence Day – 29 March. Photo Workers.

Through the treachery of the government and MPs, Britain is in political and economic limbo. Instead of being free to take back control, they have handed the future of the country over to the EU…

Delay, and more delay. Britain is now going to be denied independence for up to 6 months longer, a total of three-and-a-half years after voting for it. The delay could be even longer, should the EU decide. Brexit could be revoked.

This political paralysis is bad for Britain. Thanks to the independence saboteurs in parliament the country cannot move forward on any of the matters crying out to be addressed: changing the country for the better, taking control of industry, energy supply, transport networks, farms, fisheries, trade, and the flow of people and goods into the country.

None of these is automatic – each one has to be won. But Britain is still in the EU, still in political and economic shackles. And after the latest humiliating trip by prime minister Theresa May to Brussels, the country faces a longer battle to gain that independence it needs to get started on real change.

Yet the mood among marchers in Westminster on 29 March – the day Britain should have left – was not downhearted. There was anger, of course, but also a real buzz. The outrageous behaviour of Parliament and the Remain camp after the referendum has led to people getting organised once more. People are talking about politics, sharing ideas and taking action.

It is invigorating. Leave organisations have sprung up around the country, though unevenly spread at present. Many more are needed, with the London conurbation just patchily organised, for example.

The people must make MPs do what they promised to do at the last general election, but now have reneged upon. MPs must be made to see that if they try to cheat us out of leaving, people won’t vote for them. And there may be other forms of resistance.

The government and Parliament have pitted themselves against the people. MPs want Parliament to rule over us, but their authority comes only from the people. The people are sovereign over Parliament – and must exercise that sovereignty.

‘Make the MPs do what they promised to do at the last general election.’

During the all-too-patient wait for British independence, groups of people have been having what amount to sovereign thoughts. Creative discussions have been springing up about how to run specific areas of the economy like farming, horticulture and fisheries. How are we going to change each one – to improve the environment and animal welfare, for example?

Are the people going to continue to let market forces rule the economy and global companies operate freely within Britain? With independence there will be a choice; we will be able to have a debate and decide.

It won’t happen all at once, yet such creative discussions must continue and increase in scope. We will also have to take on those who want independence from the EU only to sign us up to a host of free trade agreements designed to continue to promote the interests of transnational corporations. These will violate our independence, which we will have to fight for and defend. But the opportunities are huge.

Britain needs to plan an integrated energy supply and an integrated transport network. But no country can control such vital parts of its economy’s infrastructure when foreign companies own most of it. Let’s open up the debate on that.

We can sort out the problems across society in the NHS, education and training, employment, home and residential care, and housing. We can protect our industries, services and environment from corporate predators. We can control the movements of capital and labour, end the Private Finance Initiative, cut out tax havens. And so on.

None of these can be addressed while living under the EU’s four so-called “freedoms” and austerity. Inside the EU you cannot choose any other policies. EU treaties prevent reform and make austerity with its privatisation and wage cuts into constitutional obligations.

It was the EU Council that on 19 June 2015 told the UK to put an end to the present “excessive” deficit by 2016-17 at the latest, and even set deadlines for its annual reduction. The government had to take effective action and report it “in detail” by 15 October 2025! So whoever is in power in Britain, they would have to implement austerity policies while we are in the EU.

‘Brexit is now about democracy and having a future.’

By contrast, Brexit does not lead to any one set of policies. The aim of voting Leave was to make our own decisions. We didn’t vote to become Singapore-on-Thames or to become a satellite of the US empire through TTIP Mark Two. Outside the EU we might choose austerity, but the evidence is that increasingly the British people reject it. Outside the EU we could choose instead to invest public money to help grow the economy.

Brexit is about leaving the EU, taking control, becoming independent. The vast majority of the 17.4 million who voted Leave understand this. Many who voted Remain now understand it too. Any proposed “Brexit deal” must answer one question: Does it provide the independence needed to fix what’s wrong in our country, and make it a fitter place for people to live?

A range of options has been put before Parliament, which was quick to vote down the only option that allowed Brexit – which they call “no deal” and we call Just Leave. All were rejected but conspirators intend to continue trying to get a majority for one or another, or indeed anything new they may devise except Just Leave.

And why would we agree to a customs union? The economy would still be ruled by the EU, as anything a government decided to do to improve it, like public support for essential industries and services, would require approval from the EU court.

Under a customs union Britain’s trade would be governed entirely by the EU. Brussels would set tariffs for trade with every other country – in or out of the EU – as it does now. Separate trade deals with any country on goods covered by the customs union would continue to be impossible.

Donald Tusk, the European Council president, made it clear that any such option being considered by Parliament would involve accepting the May/EU “withdrawal” agreement as well. That agreement is designed to rob Britain of any pretence of independence. It would trap the nation in the EU without a voice, without a vote and without an exit. It would make Britain a permanent dependent province of the EU.

That agreement, if passed, would effectively hand control of large areas of policy in the UK to unaccountable officials in the EU. Article 4 allows the EU to “disapply” any UK law incompatible with the agreement. So, a new government could not legislate its way out of it – the agreement would be enshrined in international law.

Those who consider themselves progressive and yet prefer EU control should consider this question: Can the people be more effective making demands of a government in Britain, or of the EU Commission, where all EU legislation has to arise?

In Britain the people can change the government – even change the way it is chosen and how it governs. (Indeed that looks like an item that should come up higher in our agenda.) But the EU Commission? Its role is writ in stone, in the EU Constitution, as are its four “freedoms”.

Whatever the pantomime Parliament and Remain diehards get up to over the coming weeks, or months, or years, Britain will leave the EU because the majority of people understand that we must leave.

Brexit is now about democracy and having a future. It’s about being able to hold lawmakers to account and being able to take control of our economy. It is very much about independence. And this independence matters. It is worth the hassle and upheaval.

Leaving the EU is Britain’s great opportunity. The only way forward is to struggle for independence. Brexit must be respected and the government must be forced to heed the popular demand for independence. It opens up huge opportunities for improving the lives of all who live in Britain, wherever they were born. It is the way forward.

So let’s keep calm. Insist on exiting the EU and taking responsibility for making the most of the opportunities made possible by Britain’s independence.

Brexit: from ideas to action - Manchester
Break clean for fishing
The battle is only just beginning
How to protect the environment (and why the EU makes things worse)
Manifestoes and the art of misleading