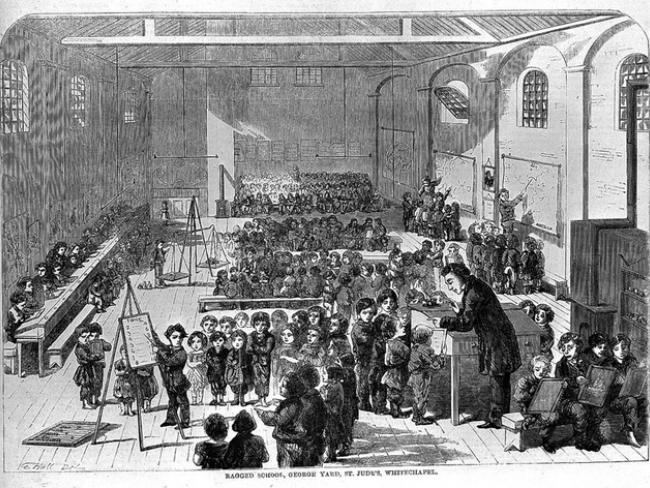 Universal education is a powerful force for workers’ emancipation. The 1870 Education Act was a great step towards achieving it, after being held back by the ruling class and the power of the churches.

From the late 18th century Britain was transformed by the Industrial Revolution and a massive growth in population. By 1850 it was clear that the country was not investing sufficiently in its people. In particular, mass educational provision had not been developed by the state.

Only very limited schooling was available to the people, all of it constrained by the country’s rigid class structure. Schools still belonged mostly to the churches and they were unable to provide either sufficient school places or proper education for all children.

By the 1860s complacency about the lack of educational provision had become less acceptable, aggravating further many of those who had long campaigned for improvements, especially for the children of the working class. The campaigners met strong opposition from an upper class fearful of government control of education.

The British government gradually and grudgingly acknowledged its responsibility for educating the people. Even then it only allowed educational expansion to proceed in a skewed manner that perpetuated class division and reinforced social separation.

In 1858 the government established a Royal Commission on the State of Popular Education in England. Its brief was to inquire into the state of public education and “consider what measures were required for the extension of sound and cheap elementary instruction to all classes of the people”.

In 1861 few of the 1.5 million children on the books of religious schools were aged 12 or older, and even then attendance was irregular. And Commission surveys found that many of those whose attendance was more regular failed to obtain a proper education due to inadequate teaching.

In its 1861 Newcastle Report, the Commission rejected any suggestion that attendance at school should be made compulsory or that it should be extended. It claimed the labour market required the employment of children.

The Commissioners disagreed about funding education. Some of them objected to government interfering with education on political and religious grounds.

The Report recommended that a grant should be paid in respect of every child who, having attended an elementary school, passed an examination in the “three Rs” – reading, (w)riting and (a)rithmetic. In 1862 the Revised Code of Regulations introduced a system of payment by results.

There was much opposition to the Code. Teachers objected partly to the method of testing, but mainly to the principle of payment by results because it linked money for schools with achievement of only minimum standards.

Higher-quality primary work which was beginning to appear in the best elementary schools before 1861, was seriously discouraged. Instead there was much rote learning and drilling in large classes.

Then, in 1870, the Elementary Education Act was passed by Parliament. For all that it was an untidy compromise that produced a dual system of board and voluntary (religious) schools, it did represent a step towards secularisation and state control, and paved the way for further positive steps. As such, the Act was a great leap forward in educational provision for working people.

‘The government grudgingly acknowledged its responsibility…’

It divided England and Wales into about 2,500 school districts. They were run by school boards elected by local ratepayers. The boards were specifically empowered to support the education of the poor, and the they were the most democratic organs of local administration of the 19th century.

All ratepayers – including women – could vote for the school boards and serve on them. Many women were elected to this new sphere of public administration at a time when few opportunities existed for them in political or administrative life.

The boards were to examine the provision of elementary education in their district. If there were not enough school places, they could build and maintain schools out of the rates. They could either charge fees or let children in free.

The boards varied in size. London was the largest, while some rural boards ran just one school. They were directly elected and independent of other local government.

The London Schools Board had 55 members and controlled almost 400 schools. It was not only the largest but also the most influential. The architecture and

layout of its schools were widely copied, setting standards for others to emulate. It established a system of school attendance officers. And it appointed its own medical officer to report on the ventilation of classrooms and to examine provision for children with special needs.

For all its progressive features, the 1870 Act did leave the opponents of the school boards in a position of strength by conceding education that would have to be affordable, and acceptable to the many sectional religious interests. Overall the Act failed to resolve the problem of the participation of the churches in state educational provision. But with all its flaws, it laid the first foundations of a universal system. Education was no longer a charity but a right.

Two years earlier, in 1868, the ruling class had advanced its own interests with the Public Schools Act. In modern parlance these schools have come to be known as “Independent” or “Private”. That Act transformed the leading public schools and instituted new governing bodies. It got rid of many places for poor and deserving local scholars and created competitive examinations favouring pupils from preparatory schools mostly attended by the children of the wealthy.

The Public Schools Act systematised an entirely segregated system of education which had few parallels elsewhere in the world. It embedded separate schooling for the children of the governing class in upper class preserves, uncontaminated by children of the working class.