Agriculture and fisheries can look to the future 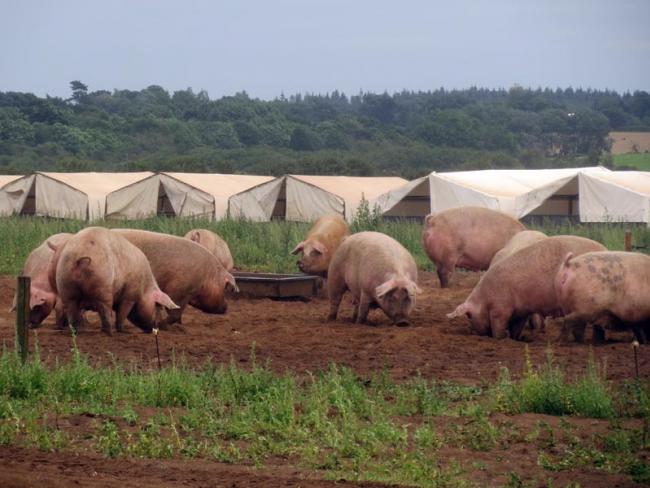 Pigs rooting in Suffolk. Over the decades of British membership the pig industry has suffered greatly from lax EU standards on animal welfare. Photo Workers

For forty years we have documented the disastrous effects of EEC, later EU, membership on British agriculture and fisheries. Now, with an end to EU membership in sight, Britain can at last begin to put things right…

With Brexit, the whole British working class has the opportunity to find new solutions to the problem that every human society, at whatever stage of development, has to face: how to feed the people.

We have written about farmers paid to grow nothing on their land under the set-aside rules, fishermen forced to throw fish back into the sea, or to stand by as others plundered our natural resources, with our fishing ports becoming as dead as mining towns. We have covered the payment of subsidies to other European countries whose agricultural economies were still peasant-based, and then there were the butter mountains and wine lakes across the EU.

More recently, the “three crop rule”, introduced by the EU in 2015, and described by the National Farmers’ Union (NFU) as “utter madness”, requires some farmers with more than 30 hectares of arable land to grow three different crops. Yet it was British farmers who pioneered crop-rotation systems, and sustainable continuous cropping systems!

The NFU President, Peter Kendall, said, “The three crop rule goes against all of the NFU core policy principles of simplicity, market orientation, and increased efficiency. It will increase costs, reduce efficiency, increase traffic on rural roads and in some cases could lead to negative environmental consequences.”

To work for a safe, reliable, secure food supply, we need to start by surveying where we are, and what assets we hold. 71 per cent, 17.2 million hectares, of the country’s land is used for farming. We grow crops and raise livestock in environments as varied as the flat prairies of East Anglia and the hill farms of Wales, Cumbria and Scotland. We can grow quantities of arable crops and fruit and produce meat and dairy products that go some way to meeting our needs.

We are currently 76 per cent self-sufficient. We can export and trade in products that are much prized abroad, and highly exportable. Scotch whisky tops the list, at a value of £4 billion a year in exports around the world, according to DEFRA.

It is not surprising that, in a country with an advanced working class, the agricultural and food products we export are those that require human skill to endow them with their qualities, added-value products rather than raw commodities, products such as smoked salmon, cheese, beer and even wine. Others include oysters, natural honey, gin, cider, flavourings and specialist ingredients.

British agriculture employs relatively few workers. In 1851 1.7 million worked in agriculture, the lowest proportion of any European country at that time. By 1921 there were 1 million. Now it’s around 400,000. But apart from the importance to the population as a whole of those workers who work on the land, their work is interdependent with the labour of many others.

The same is true of fisheries – each fisherman on the water requires boat builders and boatyards, fuel, suppliers of nets and other gear, fishmongers and distribution workers. And then the agrifood sector also employs all those who manufacture and process foodstuffs, and who work in transport, sale and in the service industries that feed workers.

But some employers in agriculture and horticulture backed the EU and the “right to free movement”. It allowed them to employ itinerant, seasonal workers on poverty wages, herded into filthy dormitories perpetuating the gangmaster system. The death of the Chinese cockle pickers in Morecambe Bay in 2004 was the consequence of this people-trafficking. Particularly in East Anglia, criminal gangs continue to enrich themselves on this system.

Now is the time to build more proper jobs in agriculture, with guaranteed year-round employment, and career structures. The intelligence of a modern nation can find a solution to fluctuations in the need for labour from place to place and time to time.

Public health professionals have rightly focused attention on the consequences for the nation of poor diet and housing, and their relationship to many of the diseases that afflict us. Workers in the NHS too must be involved in deciding how and what we produce and import.

There will need to be education and training to develop the skills we need to feed ourselves and investment in scientific research and projects that increase productivity and yield. Disease resistance and biotechnology are not evils beyond human control, but necessities for a modern economy and a priority for investment. We will no longer be at the mercy of regulations framed in Brussels by those agribusiness lobbyists with the ear of a commissioner.

As for fisheries, in 2014 fishing contributed £426 million to the UK GDP and employed around 12,000 fishermen. The EU forced us to share access to fishing grounds from 12-200 miles from the coast. We are now free to return to the standard set in international law, that is, exclusive national fishing rights up to 200 miles from the coast, the Exclusive Economic Zone (EEZ), as do Norway and Iceland.

It would, of course, be open to us to negotiate access, and quotas, for other countries’ fishing fleets to parts of our waters, if we wish, and for ours to theirs.

We could be free to regulate fishing in our waters, with due regard to the science, so as to feed ourselves. What of conservation? The regulations that require nations to co-operate to preserve stocks are not EU-derived, but come from the United Nations, the UN Agreement on Straddling Fish Stocks and Highly Migratory Fish Stocks and the UN Convention on the Law of the Sea.

There is a great deal to be done. These are questions not only for those who work on land and sea, but for the whole British working class. The petty division and diversion of Scottish separatism was neatly put in its place by the Shetland Fishermen’s Association. They gave publicity to a report from NAFC Marine Centre of the University of the Highlands and Islands in Shetland, based on European Commission data, which showed that more than half of the fish caught in British waters between 2012 and 2014 were taken by foreign fishing boats.

Their Executive Officer, Simon Collins, commented, “This report confirms the view of the entire Scottish fishing industry that Brexit creates a sea of opportunity for island and coastal communities throughout the UK. Once out of Europe, the UK will have the right to manage its own waters as it sees fit and control access to them.

“The report shows just how strong a bargaining position we have. We should deny access to our rich and productive fishing grounds to any country not prepared to offer something in return, and by that I mean fairer shares of scientifically agreed quotas.

“We urge the UK and Scottish governments to use their strength in this area to restore pride and dynamism to an industry so cynically sacrificed upon EU entry all those years ago.”