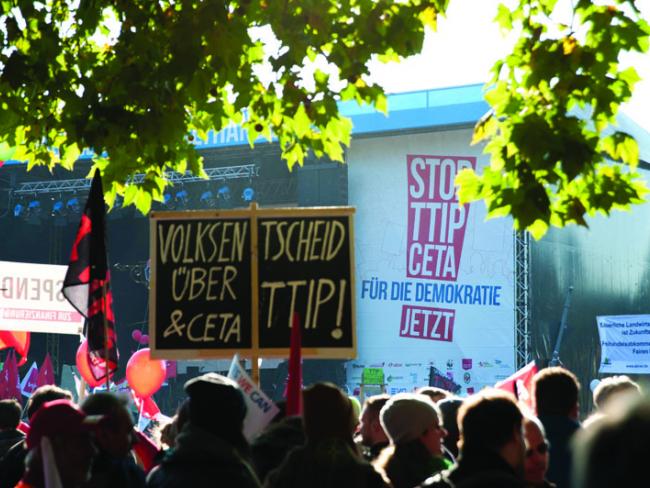 Demonstration in Berlin on 10 October 2015 against TTIP and CETA. Placards call for a Volksentscheid – a referendum on the trade deals. Photo Jan Hagelstein (CC-BY-SA 2.0)

Reports from Germany suggest that the European Commission is trying to find a way to block any national veto by the UK or any other member state of its free trade agreements – even as Jeremy Corbyn is promising that he would veto it in government.

The respected daily newspaper Frankfurter Allgemeine Zeitung (more or less Germany’s equivalent to The Times) has reported that the European Commission is gearing up for an argument with member states over ratification of the EU’s free trade deal with Canada, known as CETA. (The link is in German. For a translation, see this blog post.)

Most controversially, the CETA agreement contains a version of the Investor State Dispute Settlement clause that TTIP is also planned to include.

In a move with clear implications for TTIP – and the trade in services deal TiSA – the Commission is trying to establish that the CETA deal is wholly within the EU’s “competence”. If that happens, national parliaments cannot have a veto. Instead, the agreement would then be subject to a qualified majority vote in the European Council, which means that no individual country could veto it.

‘Instead, the agreement would then be subject to a qualified majority vote.’

To pass, the agreement would then just need the agreement of 55 per cent of the member states representing 65 per cent of the EU’s combined population. And here’s the killer: if the Commission proposes formally that the trade agreement should be treated as wholly within its “competence”, it would take a majority vote of the European Council to overturn it.

And that’s not the only initiative the Commission has made to grab all powers on these broad trade agreements. It has already made a move in relation to the little-publicised EU–Singapore free trade agreement.

At the end of October 2014 the Commission lodged a formal request for a ruling from the European Court of Justice on whether it had the competence to sign the deal with Singapore and conclude it “alone”. The Court has yet to rule on the question, which stems from differences of interpretation over the extent of the Lisbon Treaty, which entered into force in 2009.

Whatever applies to the Singapore deal will apply to CETA, TTIP and TiSA.

Implementation of the deal with Singapore is now on hold pending the Court’s ruling, even though the text has been agreed and signed. Negotiations on CETA were concluded in August 2014, at which point it was sent to lawyers for Canada and the EU to produce a definitive and watertight text.

Meanwhile, the Commission has put a typically two-faced statement on its own website about who will decide on TTIP: “EU laws states [sic] that trade agreements like TTIP can only be signed if they are agreed both by the governments of the EU’s 28 member countries and by a majority in the European Parliament [the italic emphasis is the EU’s],” it says.

What it doesn’t say is that it wants the agreements of governments to be by qualified majority vote. Those saying there no danger of TTIP being imposed and that the UK has a veto, take note.

Fake news? They're having a laugh
Agriculture: the great opportunity
The Making of a Nation - new leaflet from the CPBML
Labour: a corpse in need of burial, not resuscitation
Welsh seafarers call for jobs, training and a future