Fight the fees? There’s no time like the present 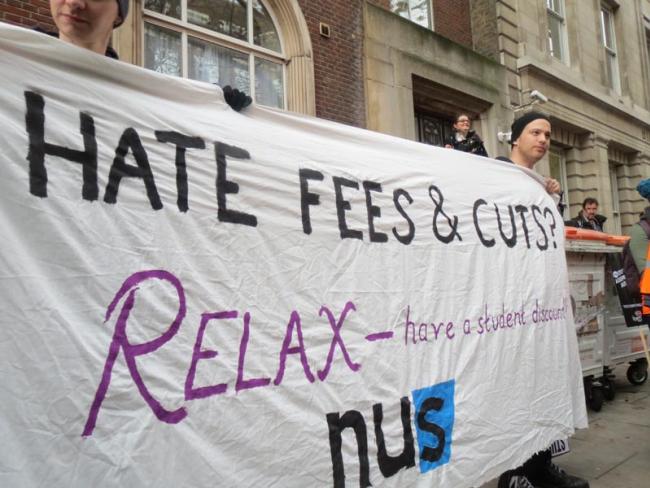 Banner in the courtyard at University College London as students prepare for the fees march in November 2014. Photo Workers

Students facing a working lifetime of debt are up against the clock. They must use their period at university to demand the abolition of tuition fees – and force their greedy vice-chancellors to join them in the fight…

Starting university in England this year? You will be entering a working life of debt – and it begins now.

With fees generally £9,250 a year, by the end of your first year you will be owing £9,814 and change – because interest fees kick in immediately, and this year they will be 6.1 per cent (the Retail Prices Index plus 3 per cent).

Yet at the same time the government meekly claims that annual inflation based on the Consumer Price Index is around 2.6 per cent as at June 2017.

By the time this year’s cohort of new students graduates, they will have an average debt for fees and maintenance of £44,000, according to a July 2017 report by London Economics for the University and College Union. For students from the poorest 40 per cent of families, the debt will be £57,000 (see related box The less you earn, the higher the interest).

And this year a new group of students will be dragged into the tuition fees net – student nurses and midwives.

There was once a time when workers were afraid of and ashamed of being in debt. Now students are told – by wealthy politicians – not to worry as they may never need to repay the debt! Student fees are pulling half an entire generation of young people into massive debt before they even begin earning money.

Then – if they’re lucky! – they will have mortgage debt to add to it. It will need luck because mortgage lenders will want sufficient after-tax income from applicants, and anyone repaying a loan will be having an extra 9 per cent of their income deducted before they even see it.

Of course, anyone earning less than £21,000 won’t have to start repaying the loan debt, but then neither will they be able to get a mortgage.

The introduction of fees (see Box) has led to a massive shift in university financing, with most of universities’ income coming from fees rather than from direct government support.

But more than that, it is mortgaging the future of the country. In 30 years’ time, at current values, the outstanding student loans will total £330 billion. By then – and very soon if the government manages it – the entire block of loans (the “loan book”) will be sold off to various private consortia, doubtless on advantageous terms.

At that point unscrupulous debt collecting agencies on behalf of various creditor syndicates will step in and apply direct pressure to earlier student cohorts. Now mostly aged 30 plus, they will be hounded either to increase or start their repayments, or to make “payments in kind”, so that, to use the language of the debt industry, “non-performing debt starts performing”.

How much of the £330 billion the government will ever see back is a key question for national finances. But helpfully for the government, the way in which the loans are made and managed means that, essentially, they are not counted as part of the government’s annual deficit.

The working assumption by London Economics is that 85 per cent of the loans will never be repaid in full, partly because any loan amount outstanding after 30 years will be wiped out under present rules. Depending on average earnings and movements in interest rates – which no one can guarantee over the short term, leave alone over decades – anything up to 45 per cent of the total loan amount will never be repaid.

But with the government set to sell the student loan book to private capital at a deep discount to reflect likely rates of non-repayment, future interest rate cash flow (effectively, taxes) from those former students who do actually repay will be diverted from the government to private coffers on favourable terms.

That will also mean there will be less scope for the government to tax the wages of those workers repaying student debt. During their working lifetime those taxes should be helping to pay for the remaining state services that still make Britain civilised. This is a system that provides no future.

Like all previous privatisations, running costs will be astronomical. It has even been estimated that if the tuition fee were to rise to £9,500, or beyond, the subsequent drop in ability to repay the loans would mean that something truly astonishing would happen: the effective cost to the government of running the loans system would be higher than the old system of direct government grant to universities.

So after 19 years of the current fees system, with fees more than 9 times as high as when they were introduced, we have massive personal debt and massive national debt. Who, one might ask, is benefitting?

The universities certainly are. They pushed for the introduction of fees, and they pushed and pushed again for higher fees. But the influx of money has not gone to improving staff/student ratios or lowering hall fees. It has gone instead into building up reserves and massively boosting the pay of a bloated legion of top administrators (see Free movement? More a free ride for universities).

The other beneficiary will be finance capital, which will be running a loan book with a value equivalent to almost half a per cent of overall GDP.

‘What is needed is a national campaign of local action’

The tragedy is that the response from students has been so muted. There has been local action over hall fees, but a concerted offensive over tuition fees has been lacking.

The most public action has been an annual walkabout in London notable for poor attendance overall, though some universities have managed better turnouts than others. Perhaps students understand that these demonstrations are dead ends.

Nationally, the National Union of Students seems to have abandoned tuition fees as an issue. Its current campaigning is limited to encouraging students to email their MPs asking for “an urgent review” of student funding – not so much a call to arms as a timid waving of the white flag.

Even the customary march in London seems to have been forgotten, with no date set for the event this year. It’s said that tuition fees were a big issue in the June general election, but this year’s intake of students could well graduate before the next one.

How, then, to fight? First of all, students must take up the struggle while they are studying. At university, they are part of a collective. It is there that the fight must begin. It can then be quickly extended to involve debt-carrying ex-students, uniting workers and students across the generations into a formidable force.

But it won’t happen if today’s students stay silent.

Nor will there be any progress so long as students look to purely nationwide approaches to action. Students must start where they are, using whatever tactics work best for them.

What is needed is a national campaign of local action, with students in each university demanding that their vice-chancellors and governing bodies repudiate the tuition loans system and call for an end to student debt.

That won’t be easy, given how many senior administrators are benefitting financially from the system. But already cracks are beginning to appear, with some vice-chancellors – just a handful for now – calling for no increases in fees. And students would have a target that they can see, understand, and potentially achieve.

This kind of guerrilla approach, university by university, college by college, won’t be popular with the armchair generals at NUS head office, or those who call for national marches so that they can set up stalls to sell politico papers. But it is the only strategy that can work.

• Related article: The less you earn, the higher the interest