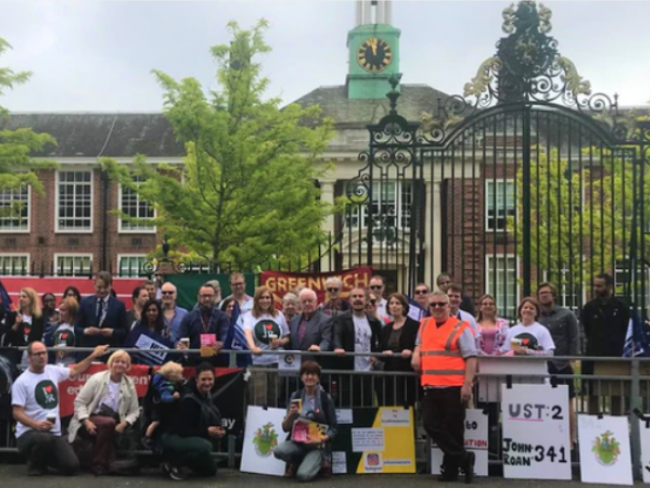 Greenwich teachers have effectively made their part of London a no-go area for the further academisation of its schools. Leading this fight has been the National Education Union (NEU) at The John Roan School where 60 teachers have recently had their eighth day of strike action.

They have so far thwarted the attempts of University Schools Trust (UST), a small local academy chain, to take over their school. With the support of over three hundred parents and the GMB support staff they have brought the process of transferring their community school to a halt.

The school was scheduled to open as an academy in September of this year but the union’s exemplary fight has forced the local council to postpone their part of the process.

Parents were so astonished that no due diligence was needed to be carried out into the proposed new trust they have written to the governors asking why they were misled as to background of UST, and in particular why the head of the trust was “effectively dismissed” from a previous post “due to financial improprieties”.

Such is the example of this struggle that the local branch of the NEU now has a model plan of action for dealing with similar attacks.

The vast majority of schools are still in local authority control and as a result remain vulnerable. But when another local school, Sherrington Primary, was discovered to be in discussion with an academy trust, an organisation for its resistance was already in place and put into action within two days.

So effective have been the teachers’ actions – including blitz leafleting, social media, press coverage and planned strike action – that Sherrington Primary has withdrawn any thought of becoming an academy. Local education workers and parents now have a message for any academy trust looking to take public assets for private profit: “Not in Greenwich you’re not.”