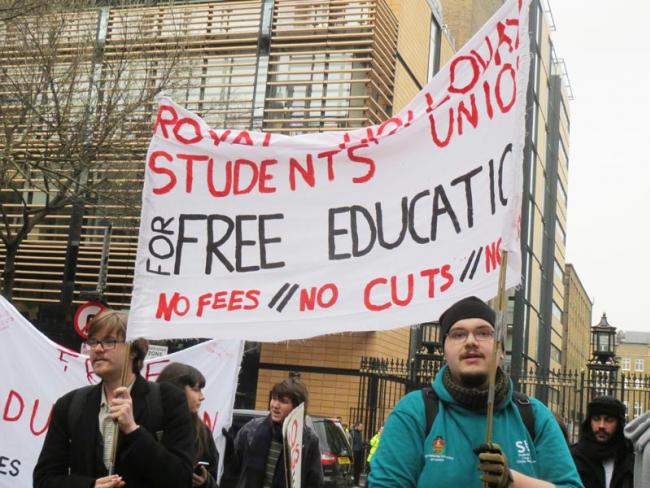 Students on the march in London, 2014. Photo Workers.

A sharp increase in inflation means millions of students and former students will see a rise in interest rates on tuition and maintenance loans this year.

Rates on student loans taken out in England and Wales since 2012 are set at 3 per cent plus the retail prices index (RPI). With March’s RPI rising to 3.1 per cent, students will be hit with interest charges of up to 6.1 per cent from September, up from 4.6 per cent: an increase of a third. The rate increase will apply to all students who enrolled at university after 2012, meaning all current students will be affected by the rate rise.

The 6.1 per cent interest is 24 times the Bank of England base rate, four times the price of a fixed-rate mortgage and twice the cost of a personal loan. It is outrageous to change the terms of the loans after people take them out – no commercial system would be allowed to do it. But this scheme is not really a loan – it’s a tax.

‘No commercial system would be allowed to do it.’

Students now in higher education will not pay this rate of interest until after they have graduated, when rates will be linked to their salary. Those who earn more than £41,000 will pay the top 6.1 per cent interest rate while those with salaries between £21,000 and £41,000 will pay on a sliding scale of between 3.1 per cent and 6.1 per cent. Even lower-earning graduates don’t get off lightly. If you earn below the minimum repayment threshold of £21,000, your loan will still accrue interest at a rate of 3.1 per cent.

Those who started university between 1998 and 2011 will be paying an interest rate of 1.25 per cent on their loans. That rate will not change in September because it is based on whichever is the lowest out of RPI or the Bank of England base rate (currently 0.25 per cent) plus 1 per cent. But those who started university before 1998 will be charged interest at the RPI figure, meaning their rate will almost double from 1.6 per cent to 3.1 per cent from September. Graduates already face increased costs following the government decision to allow universities to increase tuition fees in line with inflation, meaning annual fees will increase to £9,250 a year from this autumn.

One student affected by the rate rise, quoted in Cambridge student news network The Tab, said, “increasing interest rates will simply put current students into insurmountable debt, and in line with other measures … could deter students from worse-off backgrounds from applying to university, which is quite frankly disgusting.”

The less you earn, the higher the interest
The road to £9,250 fees
Fight the fees? There’s no time like the present
Universities discriminating against British undergraduate applicants
Brexit boosts student choice