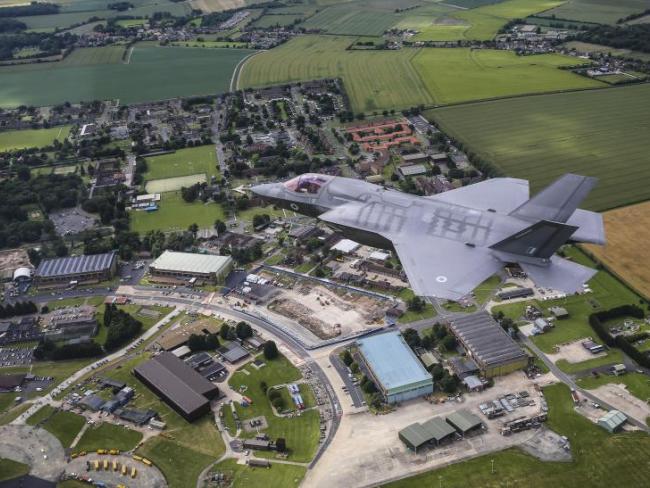 A new-generation RAF F35-B "stealth" fighter over RAF Marham, Norfolk. British Aerospace builds 15 per cent of the airframe, while the fan enabling vertical take-off and landing is made by Rolls-Royce.  Photo Cpl Paul Oldfield/MOD/Crown Copyright 2016

The working class's decision to leave the European Union was received with dismay may by the Brussels bureaucracy. They knew that without Britain, the EU would lose around a quarter of its defence capability.

In defence, as in so many areas, Britain has been a net contributor to the EU. In the referendum campaign, the EU and their proposals for integration of defence and a European army had been controversial.

Some advocating Remain claimed that there were no such plans. After the referendum results the cat was well and truly out of the bag. Indeed their plans advanced rapidly.

By September 2016 a position paper by the French and German Defence Ministers was leaked to the Süddeutsche Zeitung. It called for the establishment of a "common and permanent" European military headquarters, as well as the creation of EU military structures, including an EU Logistics Command and an EU Medical Command.

Germany’s Defence Minister in September declared, “It's time to move forward to a European defence union, which is basically a 'Schengen of defence’.” The Italian defence and foreign ministers called for a coalition of member countries willing to establish a joint permanent military force.

In November at a press conference held, intentionally, on the flight deck of an aircraft carrier off the Italian island of Ventotene, Germany’s Merkel, France’s Hollande and Italy’s Renzi declared their intention. They proposed a “new Level of Ambition to develop a stronger Union in security and defence”.

The ambition extends much further. According to a European Parliament report on the European Defence Union, it includes military air traffic control, space and even cyber-space. It extends to the EU committing itself – in the name of “countering disinformation and effectively communicating our actions internally and externally” – to a programme of propaganda and subversion.

As for the defence industries of EU member states, the EU announced a programme of “clusters of excellence” to be designated on a quota system. We are well out if this.

In the Lisbon treaty talks the EU tried to claim rights to control the North Sea including installations in the sea, such as gas and oil rigs and pipelines. Though these were rebuffed at the time, the EU has not forgone these ambitions, and we can expect them to re-emerge in the Brexit negotiations.

Behind the EU’s crucifixion of Greece lay the threat, ultimately, of military action if they had not caved in, but its plans do not only affect member states. The EU has arrogated to itself a role in the world. The so-called High Representative of the Union for Foreign Affairs and Security Policy (a Gilbert and Sullivan job title if ever there was one), Federica Mogherini, has outlined their future scope worldwide (see related box).

Brexit means that Britain need no longer fear being sucked into a European army, though we should beware the potential for such a force to be used against nations that step out of line, including ourselves. But it now means that we must consider the future of the defence of the independence we win, and how it may be strengthened and maintained.

The British working class has no interest in forming or continuing in alliances of aggression, territorial expansion, or hanging on to former colonial possessions.

NATO was founded as an anti-communist military bloc to take forward capitalism’s aggression against the USSR after the defeat of fascism. We described it, accurately, as the armed wing of the EU.

After 1991, capitalism tried to find a new role for NATO. Blair, Bush and others wanted it to function as an international gendarmerie to subdue governments that thought for themselves and would not obey orders. The EU sees it as an ally in its manoeuvrings against Russia.

One day, we will withdraw from NATO, but it is not the priority at the moment. When defence civil servants strike, they take the country out of NATO. We know we have the power to leave, when we choose to use it.

Many of us work in the defence sector. Apart from a little under 200,000 service personnel, including reservists, there are over 300,000 workers employed in defence, and it makes up 10 per cent of our manufacturing output.

Beyond the benefits of such highly skilled work in itself are the benefits to the economy as a whole. Shipbuilding is a case in point. Further, civilian trauma care has benefitted considerably, for example, from the experience of surgeons and paramedics working in Iraq and Afghanistan, whose experience of saving lives and limbs abroad has been applied to non-combat situations.

Lessons learnt in battle in managing extremity haemorrhage, blunt trauma that damages veins and arteries, blast injuries and burns, and severe traumatic brain injury have all been applied to civilian casualties, and lessons in the best way to organise and manage trauma care have saved workers’ lives.

Even experienced senior service personnel were dazzled by buy-one-get-one-free offers from foreign suppliers. The working class must now assert control of procurement. If it makes sense to make it here, then we shall.

A 2015 report by researchers at King’s College London highlighted how the Ministry of Defence has changed the way it collects statistics on the defence industrial base and in its procurement it excludes wider employment, industrial or economic factors. This should be rectified as soon as possible, so we can make strategic decisions on sound information and evidence.

We need to define the research and development in defence that we need for the future. In doing so, there is no room for woolly sentiment, or superstitious opposition to technological development. Those in the class who persist in demonising particular weapons systems need to think again, and stop jeopardising the jobs of fellow workers for the sake of their own consciences.

The GMB has taken a lead in asserting the interests of workers in defence and shipbuilding and has been treated shamefully by those claiming to represent other trade unions, notably at the STUC in 2016.

It has been left to the GMB to fight, largely alone, for shipbuilding, dockworkers and other workers in the defence industry at sites such as the Clyde, Rosyth, Faslane in Scotland, Plymouth, Devonport, Appledore and Falmouth in the South West, Barrow in the North West and Portsmouth in the south of England – truly a national industry, that the class nationally should fight for.

We need a strong navy. The Senior Service has since the days of King Alfred been the central pillar of the defence of an island. A modern navy for an independent Britain needs less the ability to intervene on the far side of the world, and more the capability to defend our own borders.

There are three areas of particular importance here: fisheries defence, in conjunction with the RAF, the control of our borders, and drug and people smuggling.

At the moment our fisheries protection fleet is woefully small, and was further attenuated by the diversion of vessels from the Fishery Protection Squadron to assist in trying to manage the Mediterranean migrant crisis.

If we assert, as we should, and as our fishermen demand, a 200-mile fisheries limit, enforcing that limit will need more ships, more crew, and concomitant onshore support.

Drug and people trafficking are not insoluble or intractable problems, though their consequences are considerable, both for the direct victims and for the areas where these problems are rife. The National Crime Agency estimates that a large number of those illegally importing drugs to this country have cultural and familial ties to the countries the drugs come from or travel through.

Our harbours and marinas need a stronger presence – more police, coastguards and harbour staff. Counter-terrorism will continue to be an issue. It is workers who die and are injured in terrorist atrocities. The working class should question why fascist terrorists reported for their activities have not been followed, and demand an account of those responsible for those errors.

What matters now is that it is our class who asserts control.

The working class is for peace, not war. That is not the same as pacifism, nor unilateralism, nor anti-nuclear this, that or the other. We have the opportunity to change the world through a new British approach to defence. The British working class never wanted, nor benefited from, British imperialism. Interventions abroad to advance anti-communism held no interest for us.

We need to start from a clear and honest assessment of what we need as a nation, and how we might achieve it. No part of working class life can be left out of our calculations and our planning.

No sovereignty without defence
Every empire needs an army – especially the EU
The EU empire's surge towards a European army
Who voted to hand over the army to the EU?
May's defence surrender